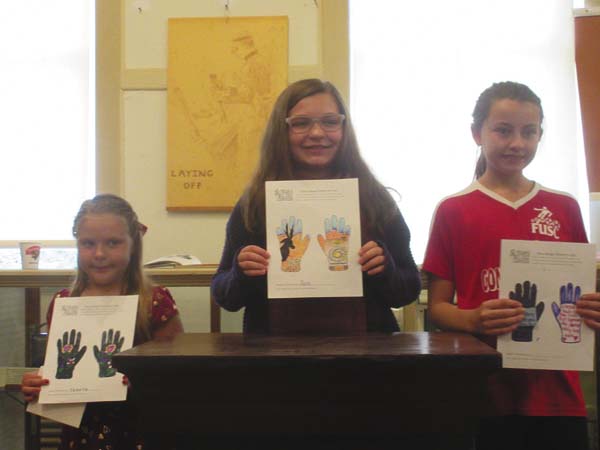 From left, Cabella VanNostrand-Pratt, Nora Meyer and Kendra Stevens were announced as the winners of the Kids' Glove Design Contest organized by the Gloversville Public Library and the Fulton County Historical Society and Museum during an award ceremony at the museum on Saturday. (Photo submitted)

From left, Cabella VanNostrand-Pratt, Nora Meyer and Kendra Stevens were announced as the winners of the Kids’ Glove Design Contest organized by the Gloversville Public Library and the Fulton County Historical Society and Museum during an award ceremony at the museum on Saturday. (Photo submitted)

GLOVERSVILLE — Awards were handed out to three finalists on Saturday selected from the talented pool of entrants to the Kids’ Glove Design Contest held by the Gloversville Public Library and the Fulton County Historical Society and Museum.

The summer-long contest asked students entering pre-K through seniors in high school to design a pair of gloves on a stock card entry form in any medium of their choice. Designs were returned to the library for initial display before they were moved to the museum for exhibit.

“All of the entries were wonderful. Many children used different methods of creating their designs,” Fancher said. “One of the youngest entrants used fireman stickers to make a bright pair of gloves, and another designed gloves with special touch pads for video gaming. The variety of designs was very exciting to see.”

Three winning designs were selected by a pool of judges comprised of local glove designer Peter Kiernan, Shawn Cleland, Jennifer Kiernan, Maria Simone, Deb Deming, Linda Hinkle and the design crew at Bali Leather. Finalists were notified in September and celebrated at an awards ceremony at the Fulton County Museum on Saturday. 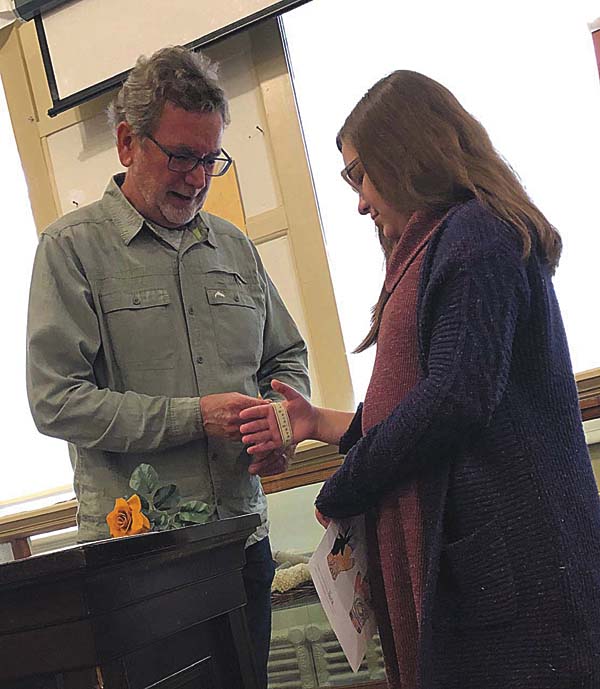 Final contest results were announced for the first time during the ceremony where Kendra Stevens and Cabella VanNostrand-Pratt learned they tied for second place and Nora Meyer discovered that she was the grand prize winner.

VanNostrand-Pratt designed a pair of black gloves with a colorful floral pattern while Stevens designed two different gloves featuring a quote about reading on one and an actual book she created with individual pages attached to the other.

The winning design submitted by Meyer incorporated several images related to the city and the glove industry including an elk similar to the figure that stands outside of the museum, a stump harkening back to the city’s former “stump city” nickname and a locomotive for the F, J & G Railroad.

Meyer’s design followed the basis for the contest developed by Fulton County Historical Society and Museum Board of Directors member Marion Viglione in collaboration with the library to involve area kids in the Year of the Glove, a year-long celebration of Fulton County’s heritage as a tanning and glove industry giant.

All three of the glove design contest winners received gift certificates from Mysteries on Main Street in Johnstown and Meyer will have her winning design made into a pair of gloves by Peter Kiernan who took her hand measurements during the ceremony demonstrating the French method of determining glove size.

“All of the kids can be very proud of their designs,” Fancher said. “We have many talented young people in this area and we are very lucky to get to see this talent.”