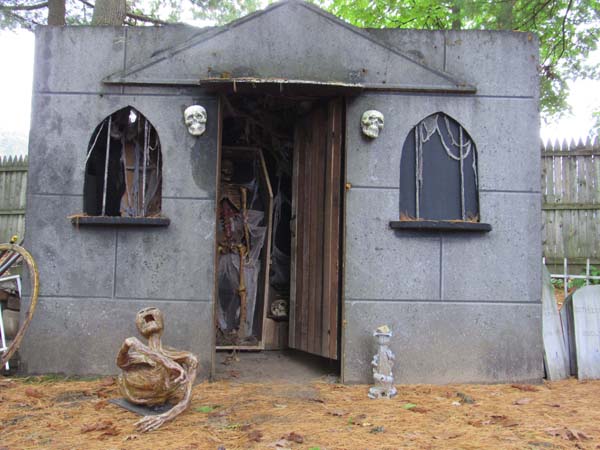 Vacancies are available at the crypt at Stonewell Haunts located at 82 Steele Ave. in Gloversville. (The Leader-Herald/Ashley Onyon)

Vacancies are available at the crypt at Stonewell Haunts located at 82 Steele Ave. in Gloversville. (The Leader-Herald/Ashley Onyon)

GLOVERSVILLE — Area residents can look forward to a frightfully good time this month when the Stonewell Haunts at 82 Steele Ave. reopen its cavernous doors unleashing a torrent of terror for the next three weekends.

Lucy VanDyke said odd things started happening in the carriage house at her Steele Avenue home located across from the Prospect Hill Cemetery soon after she moved there in the 1990s. She and her family joked about the carriage house being haunted, but she said it isn’t a joke anymore. She is convinced that it is.

VanDyke and her family also used to joke about starting a pair of haunted houses in her carriage house and garage, something else that is no longer a laughing matter.

On and off over the past 20 years, VanDyke has worked with her brother, Len Aldous, and their family to organize a pair of haunted houses on VanDyke’s property along with a cemetery in the backyard where courageous area residents can test their resolves.

“It’s gotten bigger every year,” VanDyke said Wednesday. “We have people come from all over.” 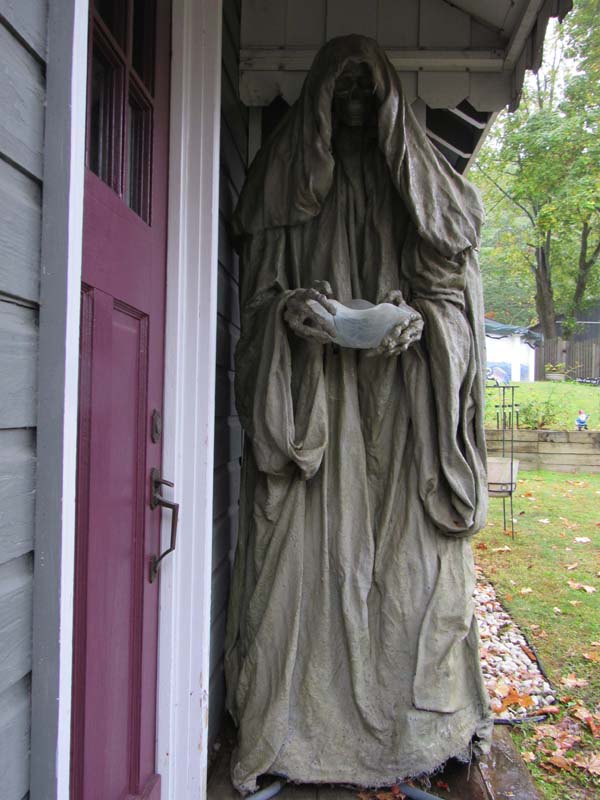 VanDyke said the Stonewell Haunts don’t rely on the types of scares that are common at haunted houses with costumed actors wielding chainsaws running around. The Steele Avenue haunted attraction is much more unnerving with members of the Stonewell family present and passed leading groups of about five visitors at a time through the haunted grounds.

“We’re telling the story of the house, along the way you get scared as different things are being introduced as a chair moves by itself or a light goes on or a book opens,” VanDyke said. “It’s all supernatural.”

There are plenty of ghastly and gruesome sights along the way as well, according to VanDyke, who noted that the crypt in her backyard is well stocked with bodies.

While the haunted carriage house may look small from the outside, VanDyke said visitors are amazed at how large it appears inside thanks to movable interior walls built by Aldous that shift to create various rooms as guests make their way through the halls featuring an array of decorations and effects handcrafted by Aldous and other family members who have now been involved in creating and appearing at Stonewell Haunts for generations.

“People say we are by far better than anything they have ever seen,” VanDyke said of the haunted attraction that she and Aldous have been steadily working since August to prepare for this year.

To offer children an opportunity to get in on the haunted fun without the fear factor, VanDyke said this week only on Saturday and Sunday from 2 to 6 p.m. the Stonewell Haunts will provide kid friendly tours of one of the haunted houses before regular hours start at 6 p.m..

“There won’t be any scares,” VanDyke said, noting that spooky sounds, eerie lights and terrifying creatures will be kept at bay for the duration of the kid friendly hours.

Additionally, VanDyke said that children are invited to visit in their Halloween costumes on Sunday for a costume parade at 4:30 p.m., followed by costume and coloring contests and other activities inspired by Jazzy Brooker, a local three-year-old battling a form of childhood cancer.

“Hopefully Jazzy will be leading the costume parade,” said VanDyke.

Brooker will benefit from all proceeds from the Stonewell Haunts concession stand that VanDyke will run each weekend. VanDyke said Brooker’s mother has been a longtime visitor to the Stonewell Haunts who she appreciates the opportunity to give back to during a time of need.

“I don’t make a lot of money,” said VanDyke. “But I thought, I’ve got a way that I can make money that I can give to them.”

“My dad died of cancer, so it hits home for us,” she added. “There are so many kids with cancer, it’s so sad and I thought she needed a voice.”

VanDyke said the concession stand will be stocked with a wide variety of snacks, drinks and hot food including homemade chili that community members have offered to donate to support the Brookers.

“Hopefully the community comes together a little bit and helps out with this family,” VanDyke said.

Presale tickets with a reserved tour time to avoid waiting in line are currently available for purchase at a reduced price of $7 per person for the full tour or $30 for a group of five at Panache Quality Consignments located at 101 N. Main St.

Special kid friendly hours will be offered at Stonewell Haunts this weekend only on both Saturday and Sunday from 2 to 6 p.m. Children will receive free tours of one of the haunted houses while accompanying adults receive admission for $3.