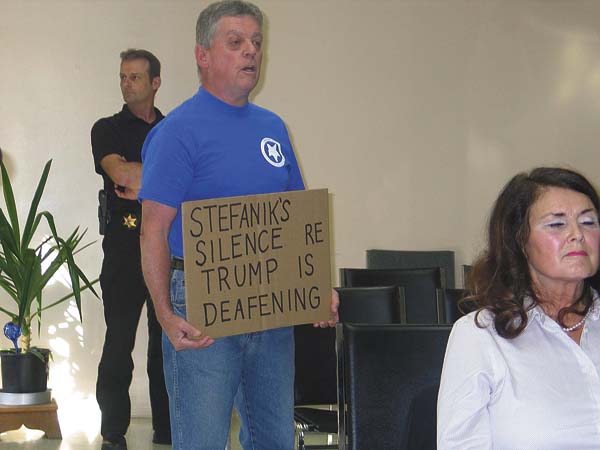 Shown are Fulton County residents who attended the Coffee with Your Congresswoman event at the Johnstown Senior Center on Thursday in which attendees were able to aske U.S. Rep. Elise Stefanik, R-Schuylrville questions on any topic. (The Leader-Herald/Briana O’Hara)

JOHNSTOWN — Community members sought answers to their questions on a series of controversial topics from U.S. Rep. Elise Stefanik during an event Thursday.

Stefanik, R-Schuylerville, hosted a Coffee With Your Congresswoman event at the Johnstown Senior Center. The event allowed constituents to ask her questions on topics ranging from the impeachment inquiry and border patrol to the opioid epidemic, Syria and her support for President Donald Trump.

“We have lots of different perspectives, I look forward to being respectful and hearing a lot of different views here today,” Stefanik said beginning the event.

A resident asked Stefanik why she voted against funds for treating opioid addiction, when there is currently an ongoing opioid epidemic in America. 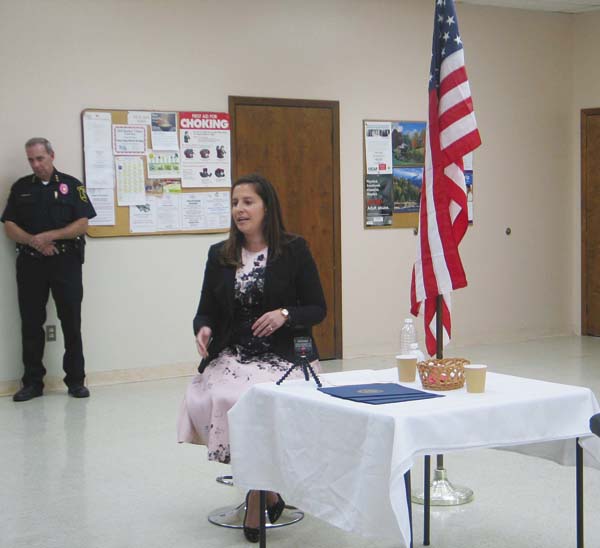 “I’ve been proud to vote in support in increasing opioid funding. We have passed the comprehensive opioid reduction package that was very bipartisan,” Stefanik said. “We spent more support solving the opioid epidemic than any previous congress. I’m not sure what bill you’re referring to because any opioid funding bill I’ve voted in support of. I’ve had opioid roundtables right here in Fulton County actually.”

In response to a question about Stefanik’s stance against President Trump’s decision to pull U.S. troops from Syria, Stefanik said she disagrees with the president. She said the withdrawal of troops diminishes trust between partners and allies.

“I’m deeply concerned. We are doing a sanctions bill. It is bipartisan, so you have bipartisan condemnation, with very senior senators from both sides the aisle,” Stefanik said. “I will be one of the Republicans on the Republican side. But this is where I disagree with the president. We haven’t really had a Syria policy in two administrations. I think that has been a weakness of our national security.”

Several residents questioned why Stefanik continues to support President Trump after his “continuous, reckless behavior,” specifically allegations made that the president asked the Ukraine president to investigate 2020 Democratic contender Joe Biden and his son, Hunter, along with her decision to ask Rep. Adam Schiff to step down as House Intelligence Committee chairman.

A few questions asked about the matter were: “When will you sign into resolution condemning and censoring Trump for the over 12,000 lies, falsehoods, misleading claims that he has made?” “When will you be extremely concerned with our presidents continuous, reckless behavior?” “When will you hold Mr. Trump accountable?” 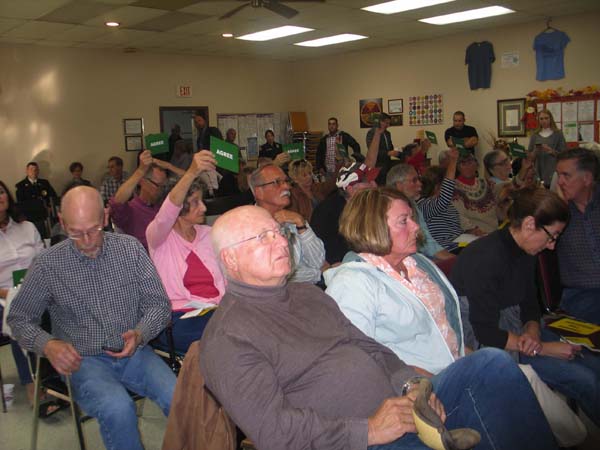 Shown are Fulton County residents who attended the Coffee with Your Congresswoman event at the Johnstown Senior Center on Thursday in which attendees were able to aske U.S. Rep. Elise Stefanik, R-Schuylrville questions on any topic. (The Leader-Herald/Briana O'Hara)

“When it comes to the president, I support the president,” Stefanik said. “I stand by my call for Schiff to step down, I stand by a resolution to censure him, and I think as a member of congress, you need to focus on oversight for your district. I’m going to work with the president when I agree, and when I disagree, I’m going to say so.”

“I just think this is a guy who from day one mocks people with disabilities, made fun of Gold Star Families, talked about grabbing women in inappropriate places, took children away,” Kitchen said. “Someone like yourself is basically silent. You could say more if you wanted to. A little press release just doesn’t cut it. We need to have a change. I think we need a civil president and a civil republican party.”

Stefanik thanked him for his feedback.

A student questioned Stefanik on what she plans on doing to prevent school shootings.

One attendee of the event asked Stefanik what her replacement would be for the Affordable Healthcare Act.

“I believe the Affordable Care Act was fundamentally flawed. I think passing healthcare in a single party, in both cases, is not the right approach,” Stefanik said. “I think any healthcare solution should be bipartisan when you have 20 percent of the economy that’s at stake. Any healthcare reform should cover those pre-existing conditions.”

She said generic prescription drugs need to get on the market as quickly as possible, and brand named drugs should not be allowed to dictate what the cost is going to be.

Brandon Rowback asked Stefanik what the future plan is for U.S. security.

“I have voted in every opportunity to increase boarder security funding,” Stefanik said. “We absolutely need that infusion of funding for our southern boarder. I’ve also outspoken at the northern border. It’s critical to our trade with Canada and critical to our security in this district. I’ve been disappointed that the speaker of the House said she’s not willing to spend not a single dollar to increase border security.”