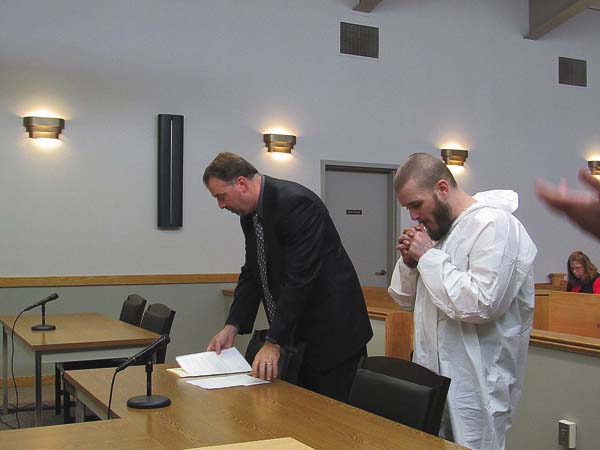 Justin R. Hill, 31, of 108 Yale St., was arraigned in Gloversville City Court on Tuesday on charges of second-degree assault and third-degree criminal possession of a deadly weapon, both class D felonies, in connection with the alleged stabbing of a man on Yale Street on Monday around 9 p.m. Hill was represented by Fulton County Assistant Public Defender Michael Poulin. (The Leader-Herald/Ashley Onyon)

GLOVERSVILLE — A city man is facing two felony charges after he allegedly stabbed another man multiple times on Yale Street following an argument on Monday night.

Justin R. Hill, 31, of 108 Yale St., was charged with second-degree assault and third-degree criminal possession of a deadly weapon, both class D felonies, by city police Monday around 9:05 p.m.

According to a police press release, officers were dispatched to the area of Yale Street and Fifth Avenue Monday around 8:59 p.m. for a reported stabbing.

Upon arrival on the scene, police located a male victim with multiple stab wounds. The Greater Amsterdam Volunteer Ambulance Corp. was called to the scene and transported the victim to Albany Medical Center for further treatment.

Police were able to identify Hill as the suspect in the stabbing and he was taken into custody without incident.

Lt. Brad Schaffer said Tuesday that Hill and the victim were known to one another and engaged in an argument prior to the stabbing.

“The nature of the argument is in dispute. There was an argument that proceeded the stabbing,” Schaffer said. “There is no danger to the public, it wasn’t a random crime, the parties were known to each other.”

Schaffer said as of Tuesday morning that the victim was still hospitalized at Albany Med where medical staff members were still assessing the man’s condition.

The stabbing is still actively under investigation and Schaffer said police on Tuesday would continue processing physical evidence that was recovered at the scene and conducting interviews with witnesses who were present at the time of the incident.

While Schaffer confirmed that there were multiple individuals present at the time of the incident, he said that police do not believe anyone other than Hill is responsible for the stabbing.

“He is the only suspect, there are no outstanding suspects and it is unlikely that additional parties will be arrested in relation to the complaint,” Schaffer said.

Hill was arraigned on the two felony counts against him in City Court on Tuesday before Judge Cory Dalmata.

Dalmata provided the currently unemployed Hill with an application for counsel through the Fulton County Public Defender’s Office and Hill was represented for the purposes of arraignment by Assistant Public Defender Michael Poulin.

Dalmata noted for the record that the Fulton County District Attorney’s Office submitted a bail recommendation to the court requesting that bail be set at $25,000 cash or $50,000 bond. The judge went on to note the court’s possession of Hill’s criminal record that included a prior felony conviction related to a February 2016 incident and a prior misdemeanor conviction.

The defense attorney conversely requested that Hill be released on his own recognizance citing Hill’s lifelong residency in the city, the presence of several relatives in the area and the fact that he had never previously failed to appear in court or had a bench warrant issued for his arrest.

“He’s not any risk of flight at all your honor, we ask that he be released on his own recognizance,” Poulin said.

Based on the allegations against Hill and other factors, Dalmata said that he would follow the district attorney’s recommendation on bail.

“I would note that I do have two class D felonies before me at this point in time, Mr. Hill did indicate that he’s not currently employed, while he does have ties to the community he does face significant exposure, he’s also [facing] allegations of a violent crime using a deadly and dangerous instrument,” Dalmata said.

Hill was remanded Tuesday to the custody of the Fulton County Correctional Facility on $25,000 cash or $50,000 bond.

Poulin reserved Hill’s right to a felony hearing on the pair of complaints against him, tentatively scheduled for Oct. 21 at 9 a.m. in City Court.