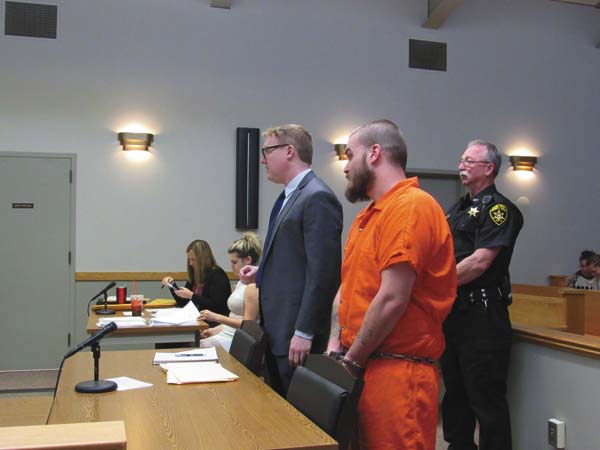 Justin R. Hill, 31, of 108 Yale St., appeared briefly in Gloversville City Court on Wednesday on charges of second-degree assault and third-degree criminal possession of a deadly weapon, both class D felonies, in connection with the alleged stabbing of a man on Yale Street on Oct. 7 around 9 p.m. Hill was joined by defense attorney Kyle Davis. (The Leader-Herald/Ashley Onyon)

GLOVERSVILLE — The man accused of stabbing another man multiple times following an argument earlier this month appeared briefly in City Court on Wednesday.

Justin R. Hill, 31, of 108 Yale St., was charged with second-degree assault and third-degree criminal possession of a deadly weapon, both class D felonies, by city police on Oct. 7 around 9:05 p.m.

Police responded to Hill’s Yale Street home for a reported stabbing and located a male victim with multiple stab wounds upon arrival. The man was transported to Albany Medical Center for treatment and was released as of Oct. 9.

Hill and the victim were known to one another and police say the men were arguing before Hill allegedly stabbed the other man. Hill was taken into custody immediately following the incident and was arraigned on the charges against him in City Court the following morning on Oct. 8.

Hill appeared in City Court on Wednesday joined by his defense attorney, Kyle Davis, before Judge Cory Dalmata. Davis reserved his client’s right to a felony hearing and the matter was adjourned until Nov. 20.

Following the proceedings Hill was returned to the custody of the Fulton County Correctional Facility where he has been held since his arraignment in lieu of bail, set at $25,000 cash or $50,000 bond.

According to the felony complaints filed by city police against Hill in City Court, Hill had in his possession a “fixed blade Coleman knife” at the time of the incident that he used “with intent to cause serious physical injury” to stab the male victim multiple times in the upper torso and lower extremities.

“The defendant’s actions caused several puncture wounds and lacerations to the victim which required immediate medical attention,” the complaint states.

Additionally, the complaints state that through his possession of the knife, referred to as a “dangerous instrument,” Hill “unlawfully, intentionally and knowingly” committed the offense of third-degree criminal possession of a weapon due to a prior City Court conviction for endangering the welfare of a child on Oct. 12, 2016.