FMCC funding still in the running 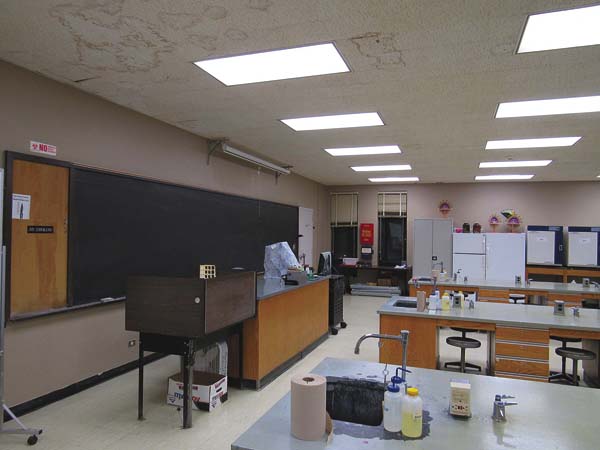 A science lab at Fulton-Montgomery Community College slated for renovation through the third phase of a capital project planned for 2020 is shown Thursday. (The Leader-Herald/Ashley Onyon)

JOHNSTOWN — Fulton-Montgomery Community College Acting President Greg Truckenmiller on Thursday expressed optimism to the Board of Trustees that full funding for the college’s 2020 capital project will be included in Fulton County’s annual budget following a meeting with the Board of Supervisors’ Budget Review Committee, which earlier this month proposed reducing the amount by $100,000.

“We had a meeting with the Budget Review Committee today that went very well and so we’re optimistic that we will be able to move forward with the capital projects as planned. There’s still a few more steps to go, but today’s conversation went very well,” Truckenmiller said.

The Budget Review Committee while performing a line item review of the county’s 2020 budget proposal on Oct. 10 requested that the $250,000 included in the budget for the third phase of FMCC’s science lab renovation project be cut to $150,000.

Supervisors on the committee indicated that they felt the college had recommended more money than should be required for the third phase.

The previous two phases of the project completed over summer 2018 and 2019 involved consolidating labs that were previously spread out among two floors onto the third floor of the academic building and remodeling the existing space.

To date, four of the college’s outdated science labs that were in use since the 1960s have been completely overhauled following the performance of asbestos abatement. Rows of long lab tables in poor condition with sinks at the end have been removed and replaced with smaller lab stations spread out across the room, with seating for four students at each table.

Utilities run up to each of the new lab stations from below the floor, improving functionality and safety by removing trip hazards. Additional outdated or inefficient fixtures and surfaces in each room were replaced or refreshed.

The third and final phase of the project would comprise renovations to the two remaining science labs; the zoology lab and the former microbiology lab which will become a general science lab.

The cost of the third phase of th project is estimated at $1 million with anticipated contributions of $250,000 each from Fulton and Montgomery counties and $500,000 in matching state funds. The project developed in coordination with county sponsors was previously approved at these levels.

If Fulton County does not maintain the originally agreed to $250,000 capital project funding, Truckenmiller said it would hamper FMCC’s ability to undertake the project in a single year.

He explained that Montgomery County, which has already approved its 2020 budget with the full $250,000 capital project contribution, may have to follow Fulton County’s lead and reduce its contribution to $150,000. These actions in turn would cause the matching state funding to be reduced by a total of $200,000, bringing the available funding for the project down to just $600,000.

“We want to be good stewards of public dollars and scaling that project back and spreading it out over a couple of years, actually probably increases the expense to a level that none of us are comfortable with,” Truckenmiller said. “With a building of that age and the asbestos abatement that needs to be done when we do projects like this we don’t want to have to do that twice, so it’s more cost effective, we get a more efficient and a better outcome when we do that all at once.”

Truckenmiller said that he went over these details with supervisors in committee earlier on Thursday, as well as the scope of the project and how it fits into the campus master plan that was developed with county sponsors.

“It was a very productive conversation with the committee,” Truckenmiller said. “Once I think everyone had a clear understanding of what the project is and you got to see what it is that we’re doing next year, those two science labs, I think there was a greater comfort level with the projects that we had proposed.”

Truckenmiller expressed optimism that the full capital project funding will ultimately be restored to the 2020 county budget proposal so that renovation of the remaining labs can be completed as planned next summer.

“We’ll find out as the process unfolds,” Truckenmiller said.

Nadal off Triple Crown trail after injury at Santa Anita