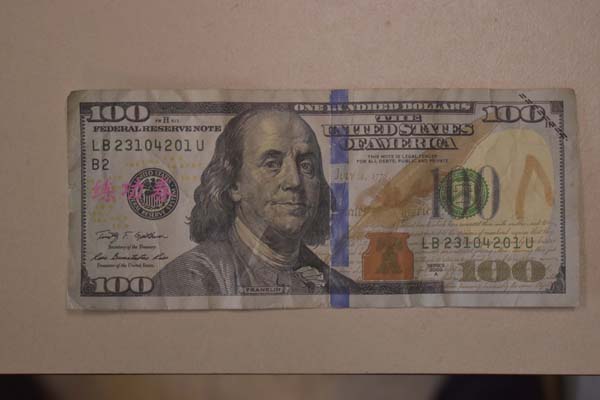 GLOVERSVILLE — City police are warning area residents and retailers this week to be alert to possible attempts to pass illegal tender after receiving several complaints regarding imitation U.S. currency.

The Gloversville Police Department released photos of an imitation $100 bill encountered through investigation of a complaint. The fake bill has pink markings consistent with Asian written characters that police say are common on the imitation currency that otherwise closely resembles authentic currency, but which has no monetary value. The front and back side of the bill also carries dash marks in one corner.

“There’s no specificity in what they are trying to purchase with them,” Schaffer said.

While Schaffer said police have only been alerted to two incidents in the city thus far, he noted that imitation currency has been identified in other local incidents. 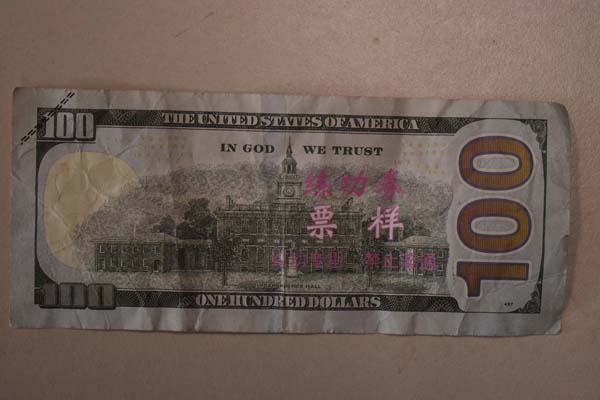 “Nearly every local agency has experienced imitation currency like we are or motion picture currency,” Schaffer said.

Schaffer explained that imitation currency is just that, printed bills that look like authentic U.S. tender, but with marks that distinguish it from legal tender, in this instance Asian characters and dash marks in one corner. Motion picture currency looks identical to U.S. currency, but has the words “motion picture use only” printed on it to distinguish it from legal tender.

Imitation and motion picture currency differ from counterfeit money that is intended to look identical to legal tender.

Members of the public are encouraged to closely examine any U.S. currency they are handling to ensure its authenticity.

“Certainly if currency has Asian characters similar to those depicted in the press release those bills are imitation currency, they are not genuine,” Schaffer said. “Examine the front of bills to ensure that nowhere does it say ‘motion picture use only.'”

“Doing those things will drastically reduce the chance of someone handling anything but genuine U.S. currency.”

If an individual attempts to pass currency at a business that is believed to be inauthentic, Schaffer said the bills should not be accepted and the establishment should contact police.

Anyone with questions regarding currency in their possession can contact police or their local bank to have the bills examined.

Anyone who is passed imitation U.S. currency is encouraged to contact their local police to report the incident. The Gloversville Police Department can be reached at (518) 773-4514.