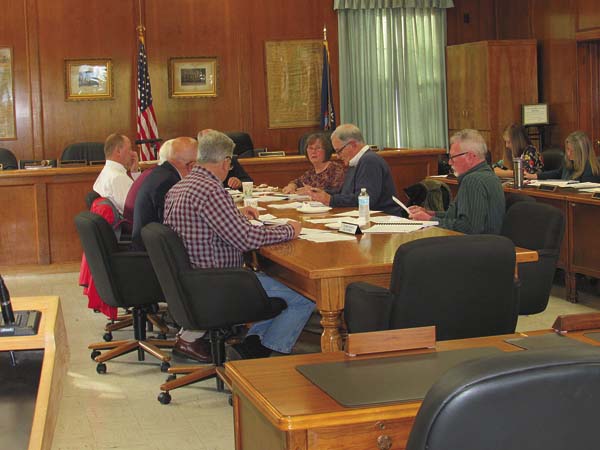 The Fulton County Board of Supervisors' Budget Review Committee review the county's 2020 budget Thursday at County Office Building in Johnstown. (The Leader-Herald/Michael Anich)

The committee is due to next meet at 10 a.m. Thursday in the Supervisor’s Chambers, at which time a continued review of remaining expenses is expected.

The FMCC reduction was the most significant cut made, as county officials continue to try to pare down the budget prior to release of the tentative budget on Nov. 12.

When the committee met last week at the County Office Building, next year’s county spending plan had a roughly 13 percent tax levy increase built in. It was unclear Thursday whether the committee made any progress on that.

“We haven’t even applied any fund balance,” county Budget Director Alice Kuntzsch said after the meeting.

She said County Treasurer Terry Blodgett has indicated the county may have about $19 million available to partially tap into to offset the 2020 tax increase.

About midway through the committee’s extensive 2 1/2-hour, line-item review of proposed 2020 expenses, the panel discussed FMCC. Supervisors came across a $250,000 capital project expense for the college – Phase III of the Campus Labs & Classroom Renovation Project.

Supervisors felt the college had recommended more money than it should have in the third phase. Committee Chairman Rick Argotsinger requested that account be scaled back by $100,000 – from $250,000 to$150,000 for next year and the panel agreed. It was noted Montgomery County may have to make a similar cut.

“They may have to redesign what their priorities are and cancel it until 2021,” Stead said.

Perth Supervisor Greg Fagan added, “We have to break the chain of expectation that you’re going to get $250,000 every year for capital.”

The committee began its session by discussing and then approving ongoing “adjustments” by Kuntzsch that added another $668,630 to the proposed 2020 county budget. Much of the new money related to the county Department of Social Services, including $475,600 in less federal family assistance aid projected, and $300,000 in less state aid for administration. Cuts were made closely with recommendations by DSS Commissioner Anne Solar.

The budget director noted sales tax distribution for the towns went down from $7.18 million to $6.87 million.

The Fulton County Soil & Water Conservation District had $5,000 taken out; as was $8,000 from an app account for the District Attorney’s Office.

Stead told the committee not to worry about any cuts it makes in the face of new added expenses.

In another area, Kuntzsch and Stead said Fulton County is in good shape with debt, with no debt service to speak of.

“Kudos to you guys, we don’t have a lot of debt,” Kuntzsch said.

Kuntzsch provided the committee with a proposed 2020 equipment list from all the departments for 2020 that ranged from a $700 printer for the county Real Property Tax Services Agency to $19,900 worth of open top containers for the county Department of Solid Waste.

Among various cuts, the Fulton County Board of Elections had $3,000 lopped from $8,000 for office supplies. The Information Technology Department sustained a $6,200 cut, and several cuts were made to the Fulton County Sheriff’s Department’s proposed budget. Among those cuts were a $20,000 reduction for overtime; $2,000 less for uniforms; and two $5,000 reductions each from vehicle maintenance and gas and fuel.