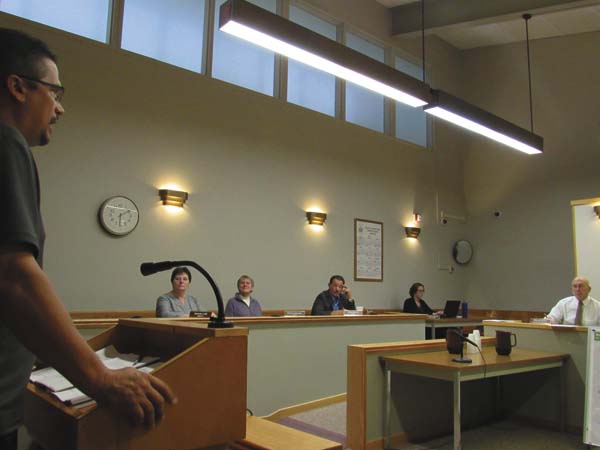 Parkhurst Field Foundation Executive Director David Karpinski provided an update to the Gloversville Common Council during the Oct. 8 meeting on plans to redevelop Parkhurst Field with the first phase of the project ready to be sent out for bids for a potential groundbreaking in the spring. (The Leader-Herald/Ashley Onyon)

GLOVERSVILLE — The Common Council received an update last week on the status of the Parkhurst Field redevelopment project hearing from foundation executive director David Karpinski that ground will likely be broken in the spring with initial site work to start as early as next month.

“As many of you know this time last year we made it through the planning board approval which was a long process,” Karpinski said during the Oct. 8 Common Council meeting. “The architectural drawings that were subsequent to that have been fine tuned over the last 12 months for all the structures that are on site.”

“As we stand here today we are submitting an application for the building permit for Parkhurst Field. It is a nice little milestone for our project.”

The Parkhurst Field Foundation for several year has been pursuing plans to redevelop the 9.6 acre park at 54 Harrison St. owned by Gloversville Little League, seeking to add three regulation Little League fields in place of the current senior field and create a premier field with a grandstand and home plate located in the site previously inhabited by the original 1906 A.,J.&G. Park ball field for which the park is known.

The Parkhurst Field Foundation was formed to promote and preserve Parkhurst Field which is recognized as the “Original Field of Dreams” and the oldest baseball grounds in continuous use by any Little League in the country.

“We’re at the beginning of this project, ironically, three years into it,” Karpinski said. “You don’t realize the amount of work that goes into getting it to this point.”

Karpinski said that the foundation will soon send the first of three project phases out to bid for the construction of the three regulation Little League fields on the current site of the senior field.

As long as bids come in according to initial estimates for the project, Karpinski said that donors have already offered funds to cover the first phase of the project that could then break ground in the spring.

“We’re working hand in hand with Gloversville Little League on the timeline and the goals, because it is their facility first and always will be,” Karpinski added.

If the weather holds going into November, Karpinski said that site work in preparation for phase one construction will begin within the next 30 days with the clearing of brush and trees along Industrial Parkway in accordance with environmental regulations.

Additional stages of the project call for the construction of the premier field with a grandstand, dugouts, restroom pavilion, concession stand and on-site museum during the second phase and the addition of a new parking lot, batting cages, lights on the ball fields and other landscaping features during the third phase.

The total cost of the project is estimated at $2.3 million. The foundation is currently carrying out a capital campaign to raise the funds for the project and secured a $500,000 grant for the project from the New York State Economic Development Council in December 2016.

The foundation hopes that the completed project will act as an economic driver for Fulton County by attracting travelling Little League teams to the site for tournaments and events outside of the Gloversville Little League season. Karpinski noted that one donor to the project has already reserved the site for one week every August in perpetuity.

The Parkhurst Field Foundation also announced in July an agreement with Eastern New York Travel Baseball to host the organization’s most popular event, the Last Man Standing Tournament that is held each July, following the project’s future completion.

“It’s an economic diamond for the area,” Karpinski said. “It hasn’t even been built yet. There is a need for it, there is a desire for it and there’s a story to be told, so we’re on the edge of making good things happen thanks to everybody’s help.”

While Karpinski took a moment to thank everyone who has supported or been involved in the project to date, Mayor Vincent DeSantis expressed his appreciation for Karpinski and the Parkhurst Field Foundation’s commitment to carrying out the project.

“We should be thanking you for your persistence in this, because this project is an enormous benefit to Gloversville when you think about dozens and dozens, hundreds of people visiting Fulton County from all over the country every summer and staying here and enjoying the area,” DeSantis said.