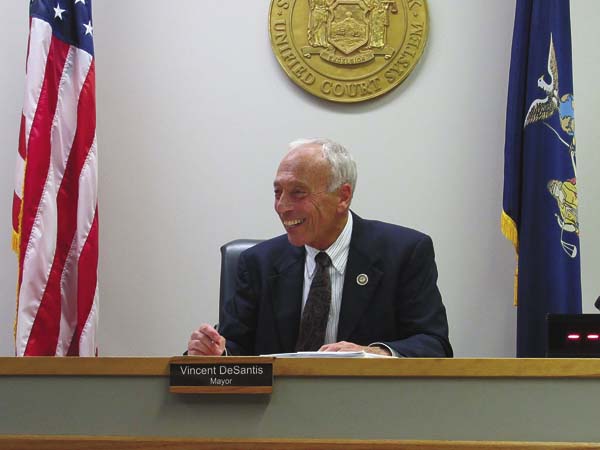 Gloversville Mayor Vincent DeSantis on Tuesday presented his draft of the 2020 city budget to the Common Council proposing a 2.68 percent reduction in total spending over the current year to $18.4 million and a 2.25 percent property tax cut to a rate of $19.50 per $1,000 of assessed value. (The Leader-Herald/Ashley Onyon)

GLOVERSVILLE — Mayor Vincent DeSantis on Tuesday presented his draft of the 2020 city budget to the Common Council proposing a 2.68 percent reduction in total spending over the current year to $18.4 million and a 2.25 percent property tax cut to a rate of $19.50 per $1,000 of assessed value.

The remainder of the proposed budget would be made up from additional revenue sources including state aid.

“As you all know, all budgets are kind of an educated guess as to what’s going to happen in 2020, future events and needs. It’s always best to be conservative, to over estimate costs and underestimate revenues and that’s what we’ve tried to do,” DeSantis explained of the budget proposal he drafted with Commissioner of Finance Tammie Weiterschan.

DeSantis noted that the majority of the reduction in spending included in the draft budget was achieved by Weiteschan’s recent refinancing of the city’s debts from previous projects and departmental expenditures, reducing the city’s overall debt service payments by securing lower interest rates.

“We have Tammie to thank for that,” DeSantis said.

The budget would largely maintain spending and staff at current levels.

DeSantis pointed to marketing of the city as a major economic development priority for next year and has proposed shifting some of these duties to the Fulton County Center for Regional Growth.

“In the economic development line item, there was $100,000 for marketing in the 2019 budget,” DeSantis said. “That was reduced to $36,000 then we increased our contribution to CRG for marketing services of the downtown development specialist’s office so there was a net savings of about $39,000.”

In order for the city to realize the reduction, DeSantis said the city would seek to connect current City Videographer Osama Mustafa with the downtown development specialist’s office.

“That would save us about $39,000 and it would make the whole thing much more coordinated and efficient,” DeSantis said.

The mayor’s budget seeks to increase the $45,000 included in the 2019 budget to establish a downtown ambassador program to $65,000. Funds included in this year’s budget for the program have not been expended.

Downtown ambassadors would serve as a conduit of information between business owners and community members or visitors to downtown and would likely help maintain the area by clearing debris or trash from sidewalks.

The downtown ambassador program would essentially be a job training program assisting people seeking stable jobs, including individuals with a past history of joblessness, addiction or incarceration.

“That’s an important program, because it gives people a leg up out of poverty number one and number two it makes the city more welcoming,” DeSantis said.

DeSantis has also proposed maintaining the $300,000 originally included in the 2019 budget for the possible establishment of a city demolition team, but repurposed for the demolition of derelict properties. The city has not yet expended the $300,000 included in this year’s budget, but DeSantis said the city is looking to tap into the funds sometime this year for the planned demolition of 211 and 213 N. Main St. and 70 Division St.

The city also issued a Request for Proposals in September for the demolition of 10 properties that may utilize a portion of the funding included in this year’s budget. Each of the 10 properties were previously seized by Fulton County through tax foreclosure and are included on the county’s outstanding list of properties slated for demolition.

DeSantis previously said that if the city can take down the properties it will cut the county’s list of city properties awaiting demolition in half, allowing the county to catch up with the outstanding list of demolitions. Properties included in the city’s RFP are 5 Maple Terrace, 60 Prospect Ave., 46 Burr St., 39 Maple St., 69 S. Judson St., 34 Fifth St., 232 S. Main St., 15 Chestnut St., 68 E. Fulton St. and 68 1/2 E. Fulton St.

Bids on the RFP are due to be returned to the city on Friday, which DeSantis said will give the city an idea of what could be achieved if the $300,000 is included in the final 2020 city budget.

“With respect to demolition that we’re talking about, we would probably be taking down derelict housing in neighborhoods,” DeSantis said. “So what it does is it increases the marketability and the value of the neighborhood. It eliminates that which denigrated the neighborhood.”

“If we can make Gloversville more marketable we will be able to attract people, increase our population, increase our business activity, increase our job opportunities, but we have to be courageous enough to invest in that and actually do the hard work,” DeSantis said.

The Common Council will begin reviewing and revising the mayor’s $18.4 million 2020 city budget proposal next week during workshops scheduled with department heads on Oct. 16 and 17 at 6 p.m. at City Hall.