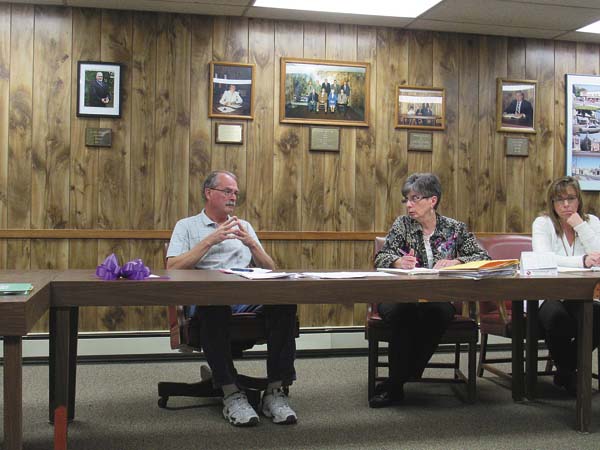 The village of Broadalbin held its regular meeting on Tuesday. From the left is Mayor Lawrence Cornell, Clerk Sheila Bleyl and Deputy Clerk Michele Rackmyre. (The Leader-Herald/Briana O'Hara)

In June 2018, the village approved an intermunicipal agreement between the village and Fulton County for the formation of the Vail Mills Sewer District.

The village has been working to make sure that everything within the sewer district coincides with village sewer law.

“They’re doing a project at the county level, however, it’s our agreement since we’re going to be accepting this system, they have to follow our village sewer law,” said Mayor Lawrence Cornell. “So there may be some slight variations in what they did and what our village sewer law says. We’re just trying to make those match right now, so later there [won’t] be those questions. We can show in the minutes that those things were approved.”

The three variances the village approved include the line size and possible clean out at Dunkin Donuts, the undersized pipe and clean out at the Fulton County Visitor Center and the oil separator at Adirondack Harley Davidson.

Trustee Dave Jennings said Dunkin Donuts wants to keep their four inch pipeline under their parking lot rather than go to the six inch pipeline the village zoning requires.

At the visitor center, they ran a 6-inch-pipe line under their parking lot then it changes to a four inch pipeline.

“They ran a four inch [pipeline] when they put in the tank. It’s all tied to the tank,” said Lawrence.

He said the village requires them to own the whole line, so if it were to plug, it isn’t the village line.

“I also talked to our engineers who said they need to have a clean out at that interchange,” Cornell said. “And the interchange has to be concentric. This is a unique situation because of the parking lot.”

At Harley Davidson’s, they have an oil separator which is used for any oil mishaps.

Cornell said they need to approve a variance for the oil separator because the village’s sewer law doesn’t have any specifications for oil separators.

The village board passed the motion to approve all three variances.

Cornell said Jennings will continue to approve permits, make sure water meters are in place, grease traps are in place and any other work is completed in relation to the sewer district.

“The only thing this board has to approve is any variances or oddities within our sewer law that require village board approval,” Cornell said.