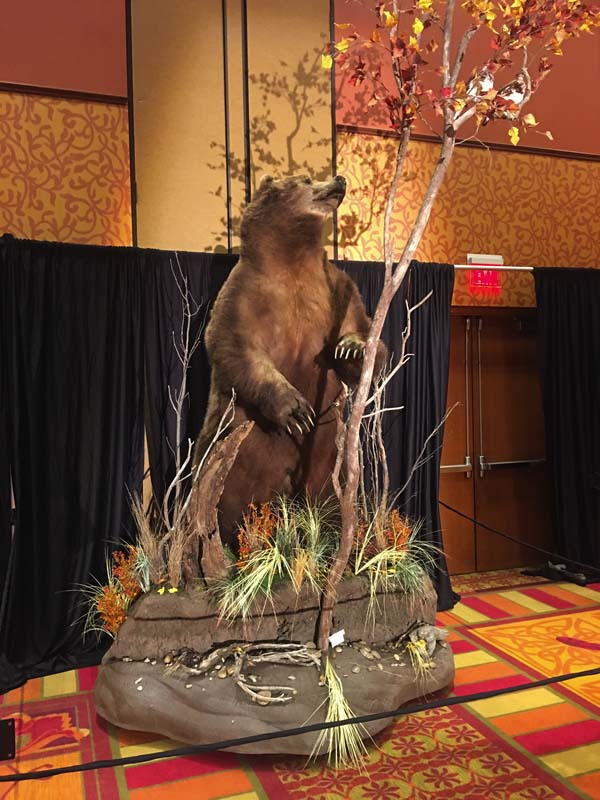 The new world record brown bear taken with a bow and arrow. Nerves of steal are required to stand within bow range of a critter of this size and maintain your composure. (Photo courtesy of Stephen George)

Back in the late ’60s, there was a discontent among bowhunters throughout the United States and the sport of archery hunting was getting a bad rap. The sport of bowhunting was thought of as archaic. Then a man from New York took it upon himself to unite bowhunters and protect the sport. That man was Bill Wadsworth, a retired Boy Scouts of America executive and avid bowhunter. It was his initiative to educate all archers that helped put all bowhunters in North America, and Europe, on the same page to protect the integrity of the sport.

In 1969, the Bowhunting & Conservation Committee of the National Field Archery Association was developed with Bill in charge. The committee was formed and he was in charge of developing an education program that could be used by the states to educate archers going into the field with the best knowledge available to ethically harvest big and small game. Bill had written an educational program around that time and in 1979, bowhunter education had established roots in the archery community and was seen as a need more than a want.

On Oct. 13, 1979, volunteers would lead the Nation Bowhunter Education Foundation’s meeting and create the International Bowhunter Education Program. Bill’s vision from 10 years ago would become a reality that was recognized as a successful and necessary program. The education course was designed primarily to educate archers on personal safety; but it soon became about much more, with focus on fair chase, ethical shot placement, blood trailing, personal ethics, landowner relations, and public perception of hunters and hunting.

The educational course is required to bowhunt in New York and 11 other states. Students take an 8-hour Department of Environmental Conservation sponsored course that utilized NBEF manuals, charts, videos, and 3-D foam animals to educate students. The NBEF offers an on-line course — Distant Learning Program — that covers all of the student manual.

However, the DEC still requires that students enroll and participate in a classroom course to get the full benefit of the course that includes field exercises such as tree stand safety, blood trailing/tracking, shooting basics and proper form, ethical shot placement, game animal anatomy, and other essential tools for being a successful archer. The DEC utilizes volunteers to teach the course. The instructors do not get paid or compensated in any way — not even free licenses, or a lunch for teaching. All of the instructors do it out of an innate commitment to the sport of bowhunting and the desire and a passion to “pass it on.” I have been a DEC certified bowhunter education instructor for over 26 years now and its always a pleasure to teach new students the beauty and art of bowhunting. 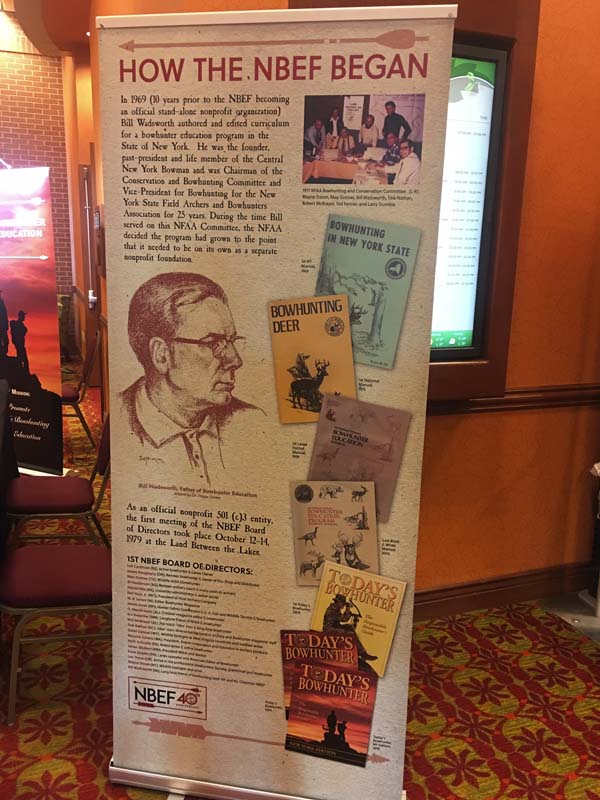 The display board at the Poe & Young Convention illustrates the 40 years of NBEF history. (Photo courtesy of Stephen George)

During my early years as an instructor, I met Wade Nolan at the Perth sportsman’s dinner. He was a video photographer from Alaska and he encouraged me to join the NBEF as a board member since I was a master DEC instructor and taught bow, gun, trapping, and waterfowl ID for the DEC at Pine Tree Rifle Club.

Since that time, when I applied and was accepted to the NBEF, I have risen in the ranks and have been the president of the NBEF for the last six years. It’s not only my passion for bowhunting that keeps me teaching courses and involved with the NBEF, but I also see the need for educated hunters to be good examples within the hunting and non-hunting community to further the sport into the future. While I cannot teach or be directly involved with all of the classes at Pine Tree, the dedicated volunteers at the club put on two bow and gun classes every year that always reach student capacity — 30 students — at enrollment.

The first thing students are made aware of in a class is that any animal, despite its size, is a trophy in its own right, if taken with stick and string. Also, the method of taking an animal with a primitive bow, such as a long-bow or recurve, is something that has been accomplished since the dawn of man. Early man harvested all types of animals and fish with the bow to feed and cloth themselves. Imagine the thrill and excitement of standing 20 to 30 feet from a bear, a bison, an elk, or a musk ox, and harvesting it with the bow, animal gut string, arrow, and a stone field point made by you while sitting around the fire? It’s crazy to think about it.

This April, the NBEF met in Omaha, Nebraska at the Pope & Young Convention to celebrate its 40th anniversary. Close to a thousand bowhunters attended the three-day convention and helped celebrate with the NBEF. The key-note speaker at the convention was Donald Trump, Jr. and he spoke about his life-long hunting and fishing adventures, his father’s disappointment when he graduated from a prestigious business school and went out West to bartend and hunt and fish … who has never given that a thought?

At the convention, most of the new world record animals that were harvested with a bow were on display and awards were given out. A testimony to modern game management programs is the recording of new world record class animals every year. Anti-hunters claim that “trophy” hunters deplete genetics and the sport is bad. Little do they know that harvesting bigger and older animals is necessary and considered good management of a species. “Let the little ones grow” is something we as hunters are taught so the species stay and age classes of populations are healthy. 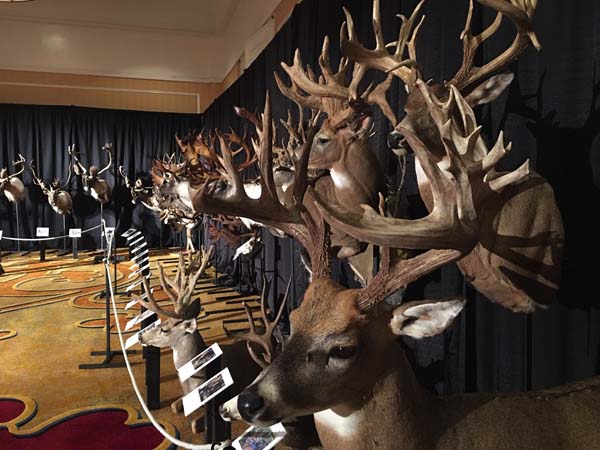 The display of new world record deer from all over the globe was something any deer hunter can admire. (Photo courtesy of Stephen George)

Forty years ago, New Yorker Bill Wadsworth had a vision that became a reality. His vision for united and educated bowhunters has helped propel the sport of bowhunting into an enormously successful program around the globe. According to the NBEF, 50,000 people take the bowhunter education course each year. In some states like Colorado, a hunter must present their bowhunter education certificate, not a hunting license, to get a bow stamp in that state. This is affirmation that the course is not only recognized as a valuable part of a bowhunters development, but a necessity to ensure that fair chase and ethical hunting practices are employed while in the field.

If you need a hunter education course, visit the DEC’s website www.dec.ny.gov/ and type in hunter ed courses in the search bar. Registration of all classes, whether it be bow, gun, trapping, or waterfowl ID is on-line. To see when Pine Tree Rifle is holding its next courses visit its website www.pinetreerifleclub.org and view the calendar.

The new world record brown bear taken with a bow and arrow. Nerves of steal are required to stand within bow range of a critter of this size and maintain your composure. (Photo courtesy of Stephen George)

The display board at the Poe & Young Convention illustrates the 40 years of NBEF history. (Photo courtesy of Stephen George)

The display of new world record deer from all over the globe was something any deer hunter can admire. (Photo courtesy of Stephen George)