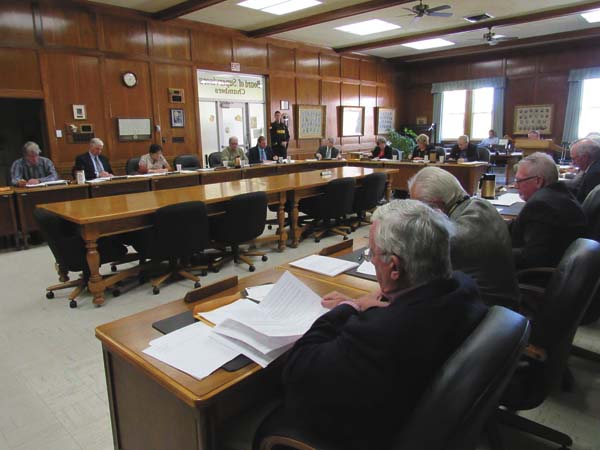 The Fulton County Board of Supervisors, pictured Tuesday, may make a decision by the end of the year on whether the county will take over administration of EMS services. (The Leader-Herald/Michael Anich)

JOHNSTOWN — The chairman of the Fulton County Board of Supervisors said Tuesday he has “every intention” of bringing a vote to the floor by the end of the year on the county assuming EMS operations in the county.

During his monthly report, board Chairman Jack Wilson of the town of Johnstown said the time is drawing near for a decision, which will be made by the end of his term, he vowed.

“This has been a very busy month for all of us,” Wilson told the board Tuesday at the County Office Building.

Wilson noted that he and other county officials such as Gloversville 6th Ward Supervisor Warren Greene and county Emergency Management Director Steven Santa Maria attended a session Oct. 1 with officials from the state and other counties. The topic was emergency medical services and the lack of comprehensive services upstate in many counties, he said.

“We all take this very seriously,” Wilson said.

He said 24 of New York state’s counties are concerned about their loss of EMS services.

Fulton County was thrust into a similar situation created earlier this year when the county’s two highest-profile ambulance units shut down. Now, the county is deciding whether to pursue an official Certificate of Need, or CON, from the state Department of Health. They are working on a business plan about ambulance services.

Current estimates are that it may cost up to $6 million for Fulton County government to create its own ambulance unit.

If the county decides to assume all EMS, and secures proper documentation, its CON would supersede or have preference over any scheduling of ambulance operations currently going on in the county. It would allow Fulton County to sit down with organizations such as the Greater Amsterdam Volunteer Ambulance Service — currently handling most of the county’s calls — and work on a county-guided, controlled plan moving ahead.

Wilson said the state now “more fully understands” the “seriousness” of what is going on with many private ambulance units going out of business. He said there has to be compensation for EMS services, but not 30 to 60 percent like in many situations.

Elsewhere in his chairman’s report, Wilson said the county has to review several personnel budgetary situations for 2020.

“It appears the big budget issue will be manpower,” he said, noting shortages in the Fulton County Sheriff’s Department.

In other committee reports Tuesday:

∫ Broadalbin Supervisor Sheila Perry reported the Fulton County Board of Supervisors will be the host committee for the next meeting of the Inter-County Legislative Committee of the Adirondacks. That session will be at 10 a.m. Oct. 24 in the Supervisor’s Chambers at the County Office Building. The Adirondacks panel is also due to tour the Fulton County landfill later and have lunch there.

“There’s been quite a bit of hydroseeding in various areas,” he said.

Greene said the district at its Oct. 8 meeting also noted grants were extended to help with bridge work on South Chase Street and North Chase Street in Johnstown.

By ASHLEY ONYON The Leader-Herald GLOVERSVILLE — City police are investigating the deaths of a 31-year-old ...