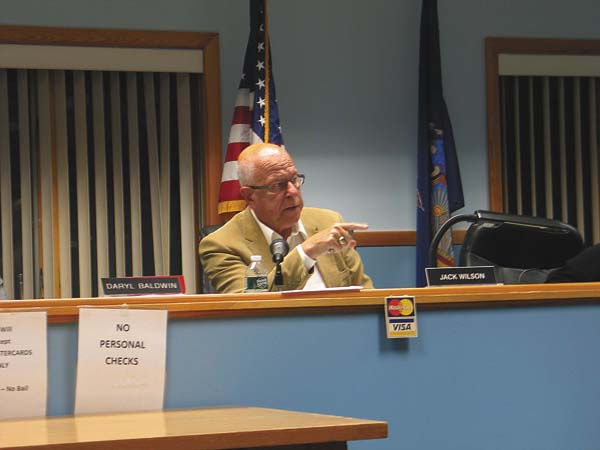 Shown is town of Johnstown Supervisor Jack Wilson during the board's regular meeting on Monday. (The Leader-Herald/Briana O'Hara)

JOHNSTOWN — During the town board meeting on Monday, residents of the Aspen Hills Water District continued to question the town board as to why they are the ones who have to pay back the remaining loan of $14,237 and a maintenance fund due to a water leak that was discovered in 2015.

In order to pay the money owed, Councilman Walter Lane proposed a payment plan that included the 55 homes that were connected to the Aspen Hills Water District at the time the leak occurred to make payments of $40 each twice a year over the course of five years. Of that $40, $30 would go toward paying the loan and $10 would go toward payments to build up a maintenance fund balance. All new water users since Jan. 1, 2017, would be billed only the $10 for the maintenance fund balance. However, that proposed plan did not pass this June with a vote of 2-2.

Residents were concerned as to why the person responsible for the leak isn’t the one who is being made to pay back the money.

“Why is that person not being charged for that water?” Jim Corbett asked. “It’s easily calculated by master meter readings.”

The leak began sometime in 2011 when a property owner hired a contractor who illegally hooked up to a city of Johnstown fire hydrant to test the lines for leaks, but never turned the hydrant off. Water had been leaking for four years until it was discovered in 2015 and the city capped the leak.

At Monday’s meeting, town Clerk Nancy Hart said she notified the town supervisor at the time, Nancy MacVean, of the leak when she noticed the first water bill was higher than it should have been in May 2013.

Councilman Daryl Baldwin said the board wasn’t notified until nearly a year later.

Supervisor Jack Wilson explained that at the time of the leak, the contract read that the city of Johnstown billed the town for the amount of water that went through the master meter.

“You folks were billed individually for your individual meter readings. The extra water that comes through the master meter is supposed to be equally divided amongst you all,” Wilson said. “When the previous supervisor was apprised that there was a problem there by our town clerk, she failed to act on to it in a timely manner and the leak kept getting worse and worse.”

Town Attorney Leah Everhart said when the leak occurred, the town paid more than the district users did.

“The difference between it was paid by the town general fund out of the greater community rather than just the district,” Everhart said.

Residents in the district questioned what the current town board plans to do to fix the problem and asked for some kind of relief from the Water Board.

Councilman Walter Lane, who is also a resident in the water district, said the problem bothers him as well.

“I’m really ticked off about the whole thing. I’m going to pay just as much as you guys pay. It ticks me off that number one, the Water Board will not accept the responsibility,” Lane said. “We as a group can hire our own attorney and go after the city, but it’s going to be a long process and I can guarantee it’s going to cost us more than what you’re going to have to pay for the water to get that done.”