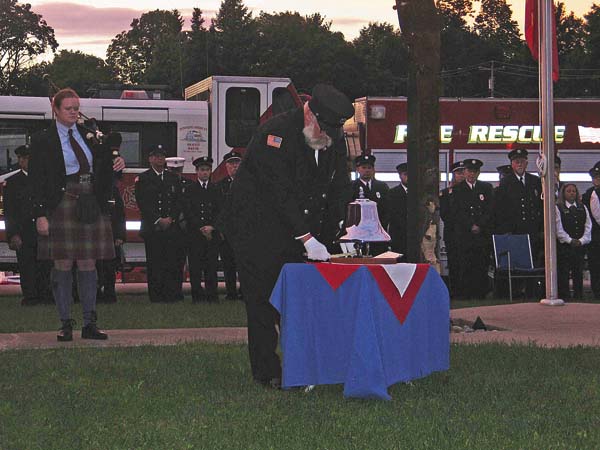 Broadalbin-Kennyetto Fireman Philip Comini performs the Tolling of the Bell during the 9/11 Ceremony on Sept. 11, 2018. (The Leader-Herald/Briana O'Hara)

As the nation marks 18 years since the deadly attacks that took place on Sept. 11, 2001, officials and residents from around the region are doing their part to keep the memory of those who perished alive, with memorials slated at both Fulton-Montgomery Community College and the Broadalbin-Kennyetto Fire Company today.

FMCC is inviting visitors to its 9/11 memorial today to honor and commemorate those who lost their lives 18 years ago. A book containing the names of each of the nearly 3,000 civilians, firefighters, emergency medical service providers and police officers that died will be on display at the memorial, which is located off of the visitor’s parking lot.

In 2016, FMCC erected a 33-foot long section of the communications tower from the north tower of the World Trade Center building that collapsed on Sept. 11.

“It’s a very public space, and especially as we’re putting in these other sculptures and kind of growing this as a formal place, I kind of see this as both a memorial and it’s very sculptural,” Director of the Perrella Gallery Joel Chapin said in 2015. “The piece is unlike any other World Trade Center artifact. Usually you see columns or beams. It kind of looks like something that was alive, almost like a spine. It was at the very top of this building and it survived coming down.”

The college also recently installed a sculpture titled “Eagles Rising” by sculptor Howard W. Brott, Sr. According to signage at the memorial, the sculpture was “designed and fabricated […] from a section of the communications antennae mast that once stood atop the North Tower.”

Shown is the portion of the Twin Tower’s north tower donated to Fulton-Montgomery Community College in 2015. (Photo submitted)

“Mr. Brott asked if he could transform the bottom portion of the antennae that was taken off in the construction of the memorial,” Chapin said. “This base piece was very mangled and hard to work on, but Mr. Brott, a lifelong metal fabricator, managed to turn it into a sculpture. I can imagine it as a flower growing from the ashes.”

Also today, the Broadalbin-Kennyetto Fire Company will hold its annual 9/11 ceremony at the Broadalbin firehouse, 14 Pine St. at 7 p.m with Fulton County Sheriff Richard Giardino as the keynote speaker.

During the ceremony, first responders will march around the firehouse, a raising and lowering of the flag will take place, and a tolling of the bell will commeratethe memory of the fallen firefighters.

Giardino said his keynote speech at tonight’s ceremony will focus on the unity that came about through this tragedy and our need as a nation to reestablish that unity.

“A real unity came out of such a tragedy,” Giardino said. “But unfortunately, with the passage of time, the unity of the nation has dissipated.”

“It’s something that we should remember and recognize,” said Broadalbin-Kennyetto Fire Chief Scott Hall. “Not just as a firefighter, but as a member of our country. We need to remember what happened and what keeps happening with all the sicknesses and cancers that many are still facing from that event. A lot of people try to forget it, but for a lot of us it’s a daily reminder of what not just firefighters, but all first responders and emergency crews went through.”