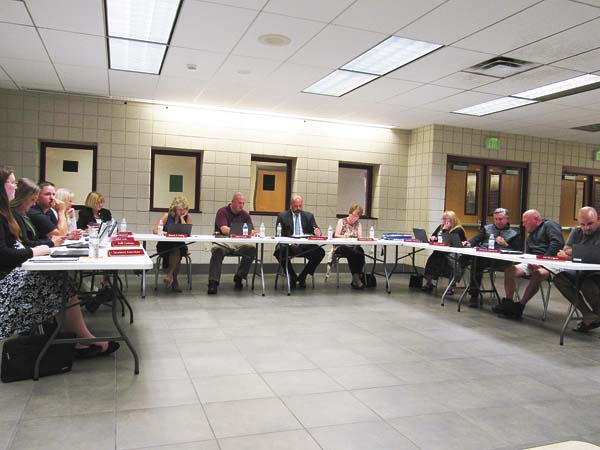 Gloversville Enlarged School District Superintendent David Halloran informed the Board of Education on Monday that the school district will receive aid from the state Department of Education for plans to cap the contaminated playing field at Kingsborough Elementary School this fall. The district expects ground to be broken on the emergency project in about two weeks. (The Leader-Herald/Ashley Onyon)

The school district announced in August that tannery waste was identified in the playing field adjacent to Kingsborough Elementary School by Ambient Environmental Inc., a firm hired by GESD in July to conduct soil and air testing at the site after recent physical changes to the field saw the surface become uneven and rutted with standing water in places and the odor of sulfur present.

Ambient identified tannery waste in 10 out of 17 excavated test pits on the field. The company took soil and water samples and monitored air quality over the course of the dig. The odor of sulfur was released while digging took place, but air quality in the “breathing zone” was not compromised at any time.

Further testing of soil samples identified concentrations of ethylbenzene, toluene and acetone in some samples exceeding the state Department of Environmental Conservation’s standards for unrestricted Soil Cleanup Objectives, meaning contamination is above the level at which the land could be used for any purpose without restrictions.

Following the excavation each test pit where waste was located was backfilled and then covered with clean soil to limit surface exposure. As a precautionary measure access to the playing field has been limited with a fence erected around the perimeter of the site.

To address contamination, the school district plans to pursue a two step approach to render the field safe for use in the short term by capping the field this fall before full remediation is performed in the coming years through the removal and replacement of all contaminated soil. Full-remediation is estimated at $2.5 to $4 million, the district plans to pursue this future project through a capital project with state aid and by securing state and federal grants.

The GESD Board of Education on Aug. 26 approved a resolution authorizing an emergency project to cap the field by compacting the waste material and then covering it with a geotextile material with a 30-year useful life expectancy that would be covered with two feet of compacted sand material and finished with half a foot of topsoil covered with seed or sod.

The project cost is estimated at $150,000 to $200,000 and will once again render the surface safe for use as a playing field. The school board approved funding the project through the use of up to $200,000 from the district’s general fund balance subject to SED approval.

On Monday, GESD Superintendent David Halloran informed the board that SED notified the district that state aid at an as yet unspecified level will be provided to support the project. District officials previously stated that the first phase of remediation would most likely be ineligible to receive state aid and decided to move ahead with the project at the district’s expense.

“We were going to do it ourselves and they made the decision to aid it, so that is great news,” Halloran said.

Additionally, the district’s capital project manager, Bob Grande of Turner Construction, informed the board that with approval from SED he has begun seeking bids from area contractors for the emergency project, which is not subject to the normal advertising procedure for bidding.

“I want a company by Wednesday,” Grande said. “Everyone that I do have bidding was told the strict schedule, that we want it done this fall.”

Grande said Turner and architecture firm CSArch have worked together to prepare and submit drawings and other paperwork to the state to ensure work can commence shortly after the district awards a bid.

“We should get a quick approval, we’ve been in constant contact with SED,” Grande said.

“We expect to have shovels in the ground in two weeks and hope to be kind of buttoning it up around Columbus Day weekend ideally,” Halloran said.

When the field will be ready for use by students will depend on the estimates returned for laying sod on the field versus seeding the field.

“Where the bids come in on that will be the determining factor on whether we go seed or sod. Sod would be ideal that way kids can jump on it and start using it in September,” Halloran said.

“Being at Kingsborough it doesn’t take a civil engineer to realize that the traffic pattern is not ideal,” Halloran said just a few days into the 2019-20 school year.

“Drawings we did for parking lot configuration [are] completely contingent on full remediation of that field. That needs to be a priority for this district, because of safety concerns for that school’s dropoff,” Halloran said. “I beg patience from the community. That’s our priority, our architects and engineers understand that as well.”