Was suspended from last position 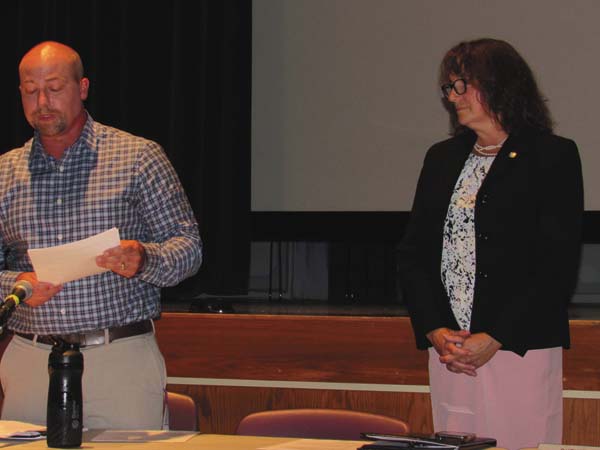 JOHNSTOWN — The Greater Johnstown School District Board of Education on Tuesday hired a western New York educator as the district’s new interim superintendent.

Karen Geelan of Springville, Erie County, was hired with a contract effective Sept. 30 and running through June 30, 2020. She will be paid on a $600 per day per diem basis, board President Christopher Tallon said today.

“I’m used to working with people who share a common vision,” Geelan said.

Geelan was suspended from her last job as superintendent of the Valhalla Union Free School District in Westchester County — a district with 1,400 students — and left that job in December.

Tallon said the Johnstown board was aware of the suspension, but would not provide public details. Several downstate media organizations had published reports indicating that the Valhalla school system declined to give a reason for the suspension.

“We have done extensive vetting on the situation,” Tallon said.

He said nothing in her past career disqualifies her from this new position with Johnstown, he said the board felt.

He said the Johnstown school district received a “handful” of applicants for the interim superintendent position and interviewed two finalists, including Geelan.

According to the resolution approved Tuesday night at Johnstown High School, Geelan was hired as “acting superintendent” in the “absence” of Patricia Kilburn, who is still the superintendent until Sept. 29.

On July 29 Kilburn, a Caroga Lake resident who served as Johnstown superintendent since 2017, was named the new superintendent and CEO of the Oneida-Herkimer-Madison BOCES District, effective Sept. 30. She will be earning $164,000 annually overseeing a BOCES for 12 component school districts in that region. Her resignation from the Johnstown district is effective Sept. 29.

The appointment of Geelan followed an executive session. Tallon read a statement about Geelan and the new interim superintendent read an oath of office statement.

“Dr. Geelan is a seasoned superintendent having served in the same capacity in two prior districts with a total of eight years of experience as a superintendent,” Tallon stated. “Prior to becoming a superintendent, Dr. Geelan had served as principal at the high school, middle school and elementary school level. Dr. Geelan’s start in education began as a teacher with a concentration in mathematics.”

Geelan said following the meeting that she started out as a teacher in Niagara Falls. Prior to spending roughly a year at Valhalla, she served as superintendent of the Allegany-Limestone Central School District from 2011-17.

“Dr. Geelan is well regarded by previous staff and district administrators in the previous districts she has been employed,” Tallon stated. “She will be bringing with her a great deal of knowledge and experience working with districts of similar size and operating budgets, which will be helpful given our district’s current situation. Her impressive background with curriculum and emphasis on student achievement, will also be a welcomed asset to the district.”

Geelan said she obtained her doctorate from the University of Buffalo, and that she looks forward to working in Johnstown.

She said she has been in education about 30 years and she called herself a “problem solver.”

He said Geelan takes this position with “unanimous support” from the Board of Education and Assistant Superintendent Ruthie Cook.

“Dr. Geelan will bring a wealth of knowledge and experience with her when she joins our district,” Tallon stated. “Her ability to effectively communicate along with her willingness to be visible, transparent, and honest are qualities we need from a leader who will be leading this district going forward.”