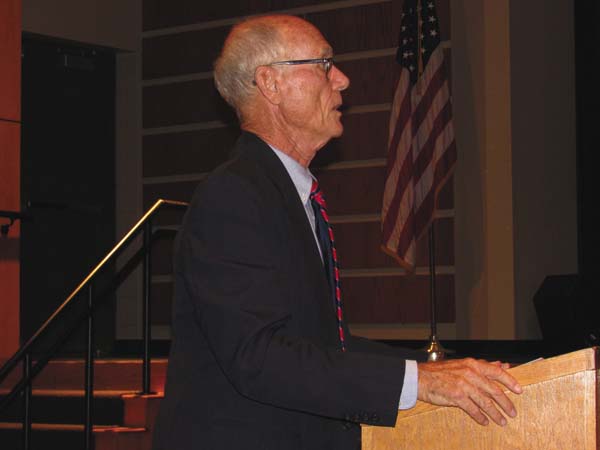 Education consultant Bill Silky gives a presentation on an Enrollment and Capacity Study his firm did to the Greater Johnstown School District Board of Education Tuesday night at Johnstown High School. (The Leader-Herald/Michael Anich)

JOHNSTOWN — If the Greater Johnstown School District Board of Education wants to close a school — possibly Glebe Street Elementary School — it should formally do so at its December meeting, an official said.

“That would be a timeline I would recommend,” district Assistant Superintendent Ruthie Cook told the board Tuesday at Johnstown High School.

The district hasn’t made a decision on closure of Glebe — recommended in an Enrollment and Capacity Study done for the district by education consultants Castallo & Silky LLC of Syracuse. But Cook said a December decision would fit with another recommendation — school building closure beginning with the 2020-21 school year.

Consultants Bill Silky and Alan Pole presented findings of the study to the full board Tuesday. They gave the same presentation Aug. 5 to the district’s Long Range Planning Committee.

Decisions that went into recommending Glebe included that the school has the smallest population and less square footage than the other schools that are open. Pleasant Avenue Elementary School has 13,000 to 14,000 more square feet of space than Glebe.

Officials are looking to close a school due to declining enrollment and financial difficulties. The consultants predicted the district’s expenditures will grow faster than its revenues the next five years.

Cook said Castallo & Silky LLC’s full report would be put on the district’s website. She noted the board meets next Oct. 24, at which time a public hearing will be scheduled on closing a building. Meanwhile, she said options will continue to be reviewed in October and November in time for a possible December decision.

Silky gave a presentation on the main facts of the study, while Pole outlined conclusions. The board was presented two main options by the consultants.

“There’s no such thing as a perfect solution,” Pole said.

“The community should have a say,” Pole said.

Option two would have pre-K through first grade at Pleasant, grades two to five at Warren, and again grade six moves to Knox.

Pole said staff savings by closing Glebe could net the district a recurring $342,947 savings — a figure that is pushed upward to $355,000 with savings from utilities tacked on as well.

“We tend to estimate savings conservatively,” he said.

“That figure is not set in stone,” warned board President Christopher Tallon, who added it could be less.

Both Tallon and Johnstown Teachers Association President Nancy Lisicki said there will be other costs at other schools if students are shifted around, such as nursing costs.

Pole said because the district implemented grade-level groupings a few years ago, which he referred to as the Princeton Plan, it helps the current situation.

“It’s an easier decision to close any building,” he said.

Silky covered other aspects of the report that centered on: Johnstown enrollment, class sizes, staffing, and finances.

“Your district has been experiencing a longstanding decline,” Silky said.

Silky said the district also has to closely monitor its tuition-paying students, such as the 53 former Wheelerville Union Free School District students who transitioned to Johnstown High School.

“That is not necessarily always a guarantee,” he said.

“Overall, it’s a very comprehensive program at the high school level,” he added.

Silky said Knox — built in 1932 — has an “abundance” of space available. The leasing of the Jansen building to BOCES is a “break even” proposition, he said.

He said Johnstown had 145 teachers last year, and fringes add 50 percent to the cost of salaries.

“As a board, I know you’ve been dealing with a lot of financial issues the past few years,” he said.

The district had capital programs in 2005, 2007 and 2014. But Silky also noted the district is “on the hook” for debt of over $17 million owed for projects and other bonding.

“You have a sizable amount of money you have to repay,’ he told district officials.