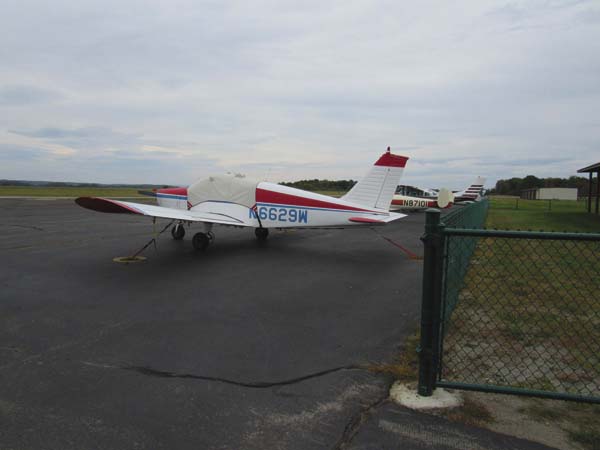 Planes are parked near the runway at the Fulton County Airport on Monday. (The Leader-Herald/Michael Anich)

JOHNSTOWN — The Fulton County Airport has been a busy construction site this year, and the small aviation facility is also due to gain a new sign by year’s end.

“We just finished up the resurfacing of the runway and parallel taxiway,” Henze said.

Rifenburg Construction of Albany has been doing work at the airport with a $922,372 runway project.

Henze said the airport has been a busy place this year because prior to the runway resurfacing project, the county also completed a runway/taxiway lighting and perimeter fence construction project at the airport. Contractor Baseline King Corp. of Barneveld was the low bidder at $719,607 in May 2018 for that project.

At the end of that project, Fulton County had to undergo a flyover by the Federal Aviation Administration to make sure no tree obstructions interferred with the flight paths of planes. Based on new sightings criteria for the Precision Approach Path Indicator at the airport, additional trees at the Runway 10 end of the Route 67 airport may need to be removed as part of the project.

The county most recently was awaiting delivery and installation of a pivot gate and completion of punchlist items.

The recently completed resurfacing project, which began Aug. 26, now just has a few touch ups, but the runway is open for use.

“Right now, we have the runway temporarily stamped,” Henze said.

In another 30 days, he said the runway will go through a final stamping with markings.

Henze said the airport now has a 12-foot solar sign it will be putting up to replace the old one at the airport. A contract with AJ Sign is finalized and layout and preliminary design of the sign has begun. It should be installed my mid-October.

“It’s in the process of being fabricated,” Henze said.

The solar part of the sign is being completed inhouse by the county.

The state Department of Transportation last year awarded Fulton County with a grant for the sign replacement.

Fulton County’s share for projects at the Fulton County Airport is typically about 5 percent, with the state DOT kicking in 5 percent and the federal government paying about 90 percent.