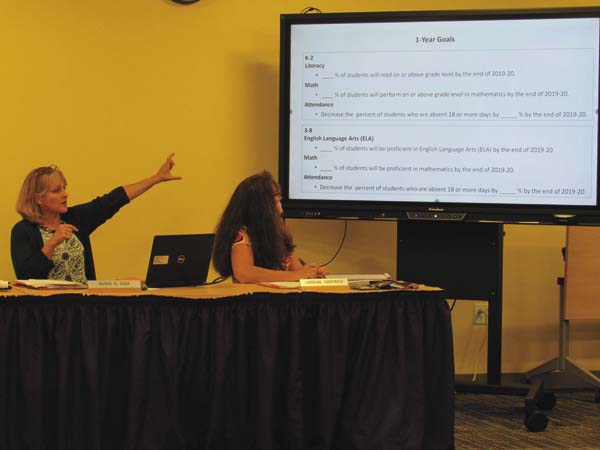 JOHNSTOWN — The Greater Johnstown School District administration discussed a vision and proposed district goals with the Board of Education Thursday night at Johnstown High School.

“We got a good starting point,” declared board President Christopher Tallon, following a lengthy discussion.

District Assistant Superintendent Ruthie Cook said the vision is to “create an environment that challenges students to achieve their greatest potential.”

Cook said students should be taught skills to achieve financial independence and thrive in the community they live in. At the primary grades, she said students are being introduced to certain content areas, junior high students “dig deeper,” and then high school students are expected to exhibit proficiency in core areas.

At each level, Cook said the district implements certain literacy goals. It also helps the district to “achieve our vision” as it continually measures areas such as math, chronic absenteeism, and the numbers of suspension students have, she said. But students have to feel like they belong, she said.

“Kids come to school when they are successful,” Cook said.

“Each school has its own goals,” noted board member Joseph LoDestro.

JHS Principal Scott Hale said his school has noticed an increase in attendance for certain students if there is a reward, such as a fun student program set up like karaoke.

Long-term goals listed by Cook include improving attendance for kindergarten through grade two; English Language Arts for grades three to eight; and other math and attendance goals.

“The next challenge is for the board to set some goals of their own,” the assistant superintendent said.

Cook said the board can set goals for itself, or also support the faculty endeavoring to reach certain goals. She also said the next interim superintendent the district hires may also have a certain “philosophy” for the district.

Board member Susanne Fitzgerald commented that she liked goals for the board itself.

Such a goal, Cook said, could involve a five-year financial plan.

“We should have some goals we can measure as to how we’re performing,” said board member Patrick Oare.

Board member Beverly Alves felt one goal would be to support children and youth “having a hard time coming to school.”

Tallon said that during a recent board retreat, members discussed a curriculum in which the district allows eighth graders to start taking Regents exams. The idea for that is if they do poorly, they can take the exams again and have subsequent years to improve. He said making studies more demanding is good.

“We’re beginning to challenge our kids at a younger level,” Tallon said.