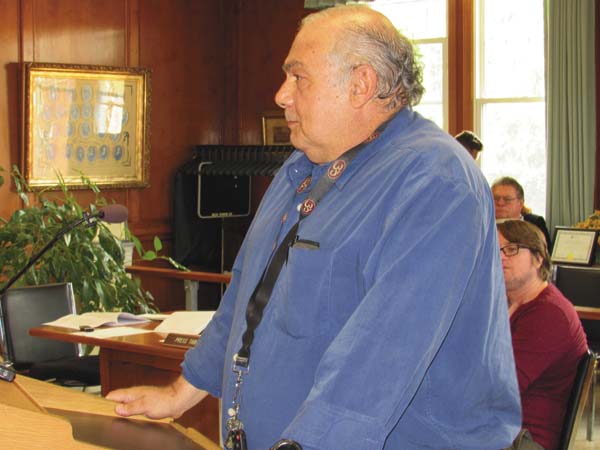 Matthew Vittucci of Gloversville addresses the Fulton County Board of Supervisors Monday during a public hearing on solar power. (The Leader-Herald/Michael Anich)

JOHNSTOWN — The Fulton County Board of Supervisors on Monday adopted a local law opting out of automatic state tax law exemptions for solar farm projects.

Action by the board at the County Office Building followed a public hearing, in which three people spoke. Opposing the law were Stratford Supervisor Allicia Rice and Gloversville 5th Ward Supervisor Gregory Young.

The local law allows Fulton County legislators to opt out of state Real Property Tax Law in order to “capture” tax revenues from the development of solar energy facilities and ensure such facilities are “treated equally” with other commercial properties in Fulton County, the law states.

Perth Supervisor Gregory Fagan told the board he wanted to publicly clarify the new local law “in no way stops solar farms from being developed” in Fulton County. But he said it allows the county — under state law — to opt out of granting automatic solar farm tax exemptions.

“It does level the playing field,” Fagan said.

The supervisor said a lot of money is being made in the solar industry nowadays, and this legislation allows some of it to come back to the county taxpayers.

Young said the county should be fostering solar energy business ventures, not discouraging them.

“I don’t think this tax increase is the answer for that,” he said. “I think we ought to encourage these projects.”

Public hearing speaker Matthew Vittucci of Gloversville, who is retired, said he is in favor of solar farms. He said he remembers solar energy initiatives going back to the late 1970s. He asked if supervisors are trying to discourage building of solar farms.

“Are we saying solar panels are not aesthetic?” Vittucci said.

He asked who on the county level is making these decisions on the desirability of solar energy.

“We can run the whole county on solar and wind,” Vittucci said.

Joseph and Rosemarie Sheperd of Johnstown also spoke, with Joseph Sheperd stating they were in favor of “solar energy and wind [energy] coming to Fulton County.” He encouraged the board not to pass the law, and encouraged alternative energy producers to get tax incentives. He also said a climate awareness event will be held Sept. 20 in Johnstown, but didn’t provide detail.

He said city government in Johnstown is behind providing LED lighting on Route 30A and electric charging stations for the public.

Rosemarie Sheperd said she was “very proud” to see that Johnstown is part of a “climate initiative.”

“This is a non-partisan issue,” she said. “This affects all of us.”