Church to celebrate its 125 years 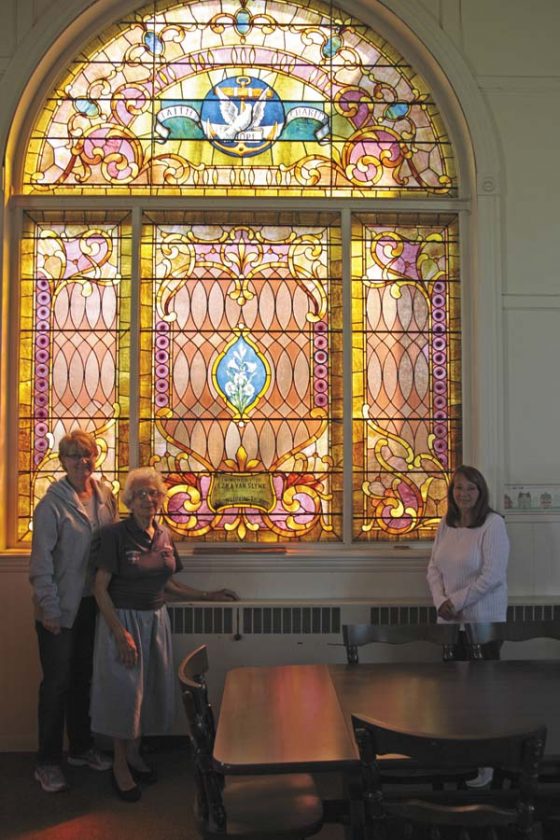 From left, Karole Vosburgh, Nancy VanDenburgh and Joy Jonson stand in front of one of the many stained glass windows of the Johnstown Reformed Church on North Perry Street. The church is celebrating its 125th anniversary this year. (The Leader-herald/Patricia Older)

JOHNSTOWN — The Johnstown Reformed Church will be celebrating a 125 anniversary in the upcoming weeks with many special events.

∫ At 7 p.m. Oct. 3, Noel Levee, city historian, will discuss the local churches in the early settlement of Johnstown.

Pastor Heather Kramer encourages the public to attend any of the events.

The Reformed Church in America derives its origin from the Reformed Church of the Netherlands which, in turn, had its rise in that part of the Reformation movement started by Zwingli in 1516 and carried forward by such Dutch leaders as Guy de Bres, author of the Belgic Confession and Prince William of Orange. The original name, Reformed Protestant Dutch Church, tells the story: Reformed because it came out of the Reformation: Protestant because it was a protest against the corruption in the church at the time: Dutch indicating its location among the Dutch in the Netherlands.

When Sir William Johnson settled here in 1762, many efforts were made in the early days to establish a Reformed Dutch Church at Johnstown. Churches were organized at Kingsborough, Mayfield, Fondas Bush and other nearby places. Here at Johnstown, though the preaching services were regularly conducted by the pastors at Fonda and Amsterdam (the Rev. TenEyck and the Rev. VanHorne), and an organization was incorporated under the title of Kingsborough Reformed Church, still the church of longest duration was the True Reformed or Wyckofite church which began in 1821 and ended in 1855. On old maps of Johnstown, as far back as 1851, 1856, 1868 and 1874 there is a Dutch Reformed Church on South Market Street. This church may have burned or dissolved.

A later thought of a Reformed Church at Johnstown came in a letter from the Rev. T.A. Beekman to the Classis of Montgomery read before the Classis at its fall session at Minaville (Church of Florida) Sept. 18, and 19, 1893, called attention to the fact that this in itself gave grounds for planting a church in both of these growing and thriving towns.

As a result, in Johnstown, the upstairs rooms of the Deckervill Hose Co. on the corner of Perry and Matthews streets, were rented at $20 a month and the first service in November of 1893.

It was agreed to put up a chapel, a lot, situated on the corner of Irving and Perry streets was purchased in June of 1894 for $750. The contract for a chapel was given to a local contractor to be completed by Dec. 10, 1894.

In the meantime, the congregation had to leave the Hose rooms and sought refuge in a white schoolhouse, a few blocks north of the present church.

The newly organized Johnstown Reformed Church started with 10 charter members. The first pastor, the Rev. John Van Burke was called Dec. 1, 1894, and remained until July 1, 1902. The chapel was dedicated Feb. 6, 1895.

In May 1965, a survey was made of the congregation as to the needs and wants of the church. It was decided, what was needed, was a new sanctuary, 14 church school classrooms, a church office and study and a congregational center with a modern kitchen.

In 1967, Calvin J. Adams was elected building program chairman and Edwin A. Adams was elected fundraising chairman. The modernizing of the church was underway. In two years time, the steering committee, John R. Foss as chairman, had completed its work.

The first service held in the new sanctuary was Dec. 15, 1968, with Pastor Albert N. Studley.