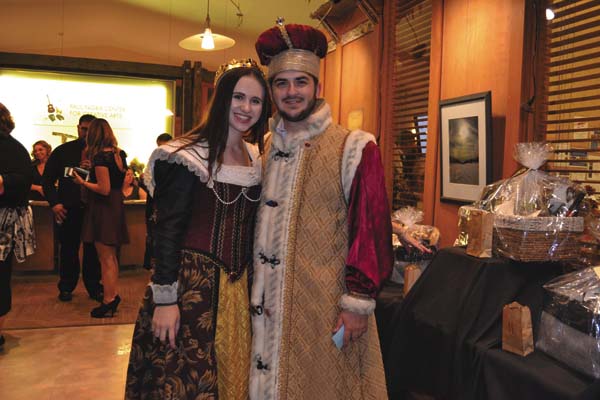 Sydney Rivenburg, left, and Brandon Oathout, dressed as the King and Queen at Lexington's Night Out on Thursday. (The Leader-Herald/Briana O'Hara)

Sydney Rivenburg, left, and Brandon Oathout, dressed as the King and Queen at Lexington’s Night Out on Thursday. (The Leader-Herald/Briana O’Hara)

A performer at Lexington’s Night Out was seen playing with fire. Performers were dressed as medieval characters to go along with the theme of the gala. (The Leader-Herald/Briana O’Hara)

The band Flame performed at Lexington’s Night Out gala on Thursday at the Paul Nigra Center for Creative Arts. (The Leader-Herald/Briana O’Hara)

Melissa Thompson, left, and Sue Matthews, right, pose for a photo by the “Iron Throne” which is known in the HBO telivision series “Game of Thrones” which followed the theme of Medieval Merriment at the Lexington’s Night Out gala. (The Leader-Herald/Briana O’Hara)

Attendees of Lexington’s Night Out danced to music performed by Flame.

Shown is Wally Hart, executive director of the Lexington Foundation, giving his speech at Lexington’s NIght Out. (The Leader-Herald/Briana O’Hara)

Shaloni Winston, CEO of Lexington gives her speech during Lexington’s Night Out. (The Leader-Herald/Briana O’Hara)

Saranac Healy of Perth gets kisses from a pitbull named Rouch at the kissing booth at the sixth annual Woofstock fundraiser in 2017. The eighth annual Woofstock is set for this Saturday from 1 to 5 p.m. at the Concordia Club. (The Leader-Herald/Eric Retzlaff)

GLOVERSVILLE — The Lexington Foundation held their medieval feast on Thursday at its annual Night Out celebratory fundraising gala.

Throughout the gala medieval performers roamed the arts center and event tent jousting, twirling flames and walking on stilts to go along with this year’s theme of Medieval Merriment with a nod to HBO’s show, “Game of Thrones.”

The event also included food catered by Union Hall Inn, around the world tastings and wine pairings with Chef Andrew Dench, raffle baskets, the band Flame, and Mark Hitrick on the piano.

“We’re certainly thrilled to have so many people join us because we’re here to celebrate Lexington and the success of the people we support, so it’s a great opportunity for us to do that and share it with the community,” said Wally Hart, executive director of the Lexington Foundation.

All proceeds from the gala will benefit the Paul Nigra Center for Creative Arts and the Elmore Transitions Scholarship Fund. 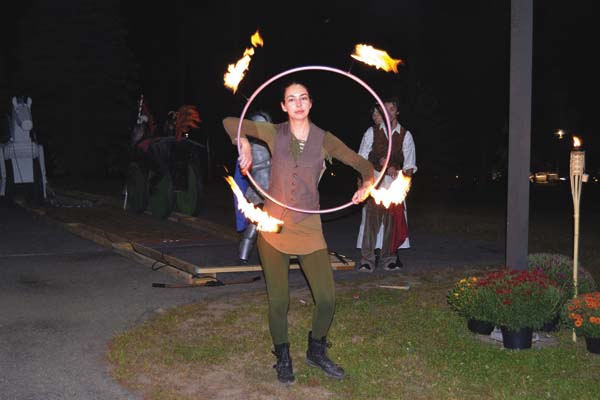 A performer at Lexington's Night Out was seen playing with fire. Performers were dressed as medieval characters to go along with the theme of the gala. (The Leader-Herald/Briana O'Hara)

“Tonight is a way for us to raise funds for the arts center because the art center is open to the public, we’re always fundraising like any other organization to try to make sure we have enough resources to put on the events we do and the programs that we do,” Hart said. “It’s also an opportunity for us to raise funds for the Transitions Program.”

Hart said the Transitions Program is for young adults who are going to college. The program helps young adults through college, and afterwards to be successful with their first job.

So far about 100 students have gone through the program in the last four years. Hart said there are currently 36 students enrolled. Students have graduated from Fulton-Montgomery Community College and have gone on to four-year schools.

“These are kids who are very bright, but they didn’t think they could go to college, but they’re going to college, they’re getting good grades and they’re graduating from FMCC and going on to four-year schools,” Hart said.

Honorees of this year’s gala for their dedication and contributions to Lexington and the Paul Nigra Center were Barney Bellinger, Susan Bellinger and John Bennett, CEO of CDPHP. 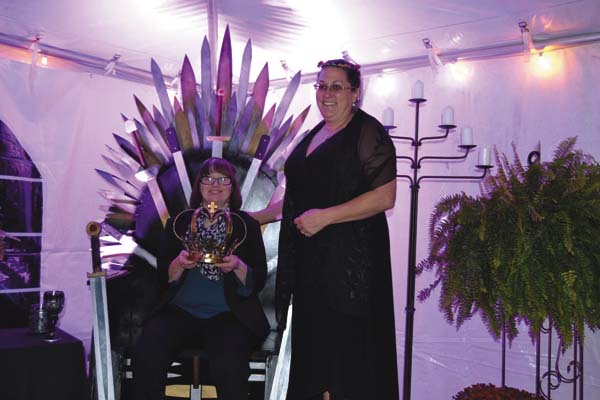 Melissa Thompson, left, and Sue Matthews, right, pose for a photo by the "Iron Throne" which is known in the HBO telivision series "Game of Thrones" which followed the theme of Medieval Merriment at the Lexington's Night Out gala. (The Leader-Herald/Briana O'Hara)

“Today we have a special opportunity to provide a great resource to our community and recognize and thank one of our partners CDPHP for their support of this resource,” said CEO of Lexington Shaloni Winston. “You may already know this, one in 59 children are diagnosed with autism in our nation. Autism doesn’t only affect the person diagnosed with autism, it affects their entire family and it affects their community, it affects every one of us.”

Winston said CDPHP has given Lexington a gift that will help create an Autism Resource Center at the Paul Nigra Center. The resource center will offer resources and support for various services for individuals and families. The center will include a lending library of books and references related to autism, computer kiosk for research along with educational and recreational software for skills enhancement. Winston said the resource center will be open to the public.

“We’re very excited to participate in this work and support children and their families and our entire community,” Bennett said. “It’s our goal to really make not only our members, but the entire community happy. Hopefully in some small way we contributed to that with this partnership.”

Winston then introduced Barney Bellinger, a painter and furniture artisan who teaches art such as welding and woodworking to students in the Transitions Program. He and his wife, Susan, have both contributed to the Paul Nigra Center.

“Barney and Susan have brought numerous artists, collectors and promoters of the art to this campus,” Winston said. 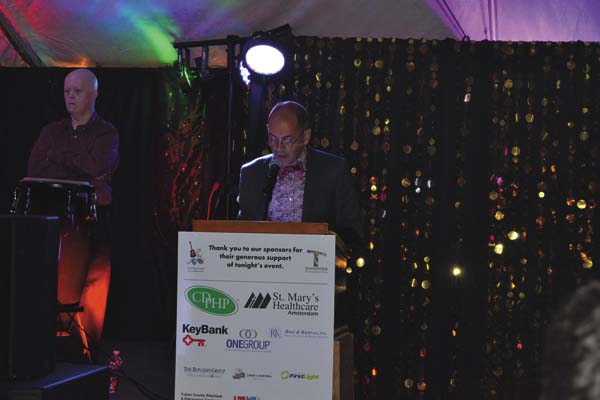 Shown is Wally Hart, executive director of the Lexington Foundation, giving his speech at Lexington's NIght Out. (The Leader-Herald/Briana O'Hara)

Winston said Barney Bellinger began contributing by renting space in the annex building and used it as his art studio in which his art pieces have been installed throughout the Paul Nigra campus. He then offered to teach classes to anyone who would want to work with him in the studio along with the Transitions students.

“They have created many individual pieces and designed and crafted several pieces collaboratively,” Winston said.

One of their pieces was entered into a state show and won one of the top prizes.

“I don’t know about autism, I don’t understand it, but I understand the students when they come into my space and they want to be involved in creating or helping,” Barney Bellinger said. “I think sometimes it’s easier for me to hand them drill or a tool or something to work with and say ‘give me a hand.’ The next thing I know, we’re engaged, and then we’re building and creating.”

Bellinger said some of the students were shy at first, but then after a few classes became engaged and helpful. He said as a teacher he is still learning himself, but it’s making a difference that matters the most. 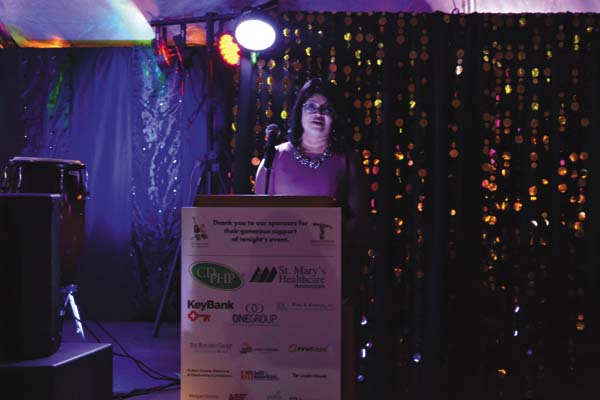 Shaloni Winston, CEO of Lexington gives her speech during Lexington's Night Out. (The Leader-Herald/Briana O'Hara)

“Thank you for letting me be here,” Bellinger said. “Life without art is an opportunity missed.” 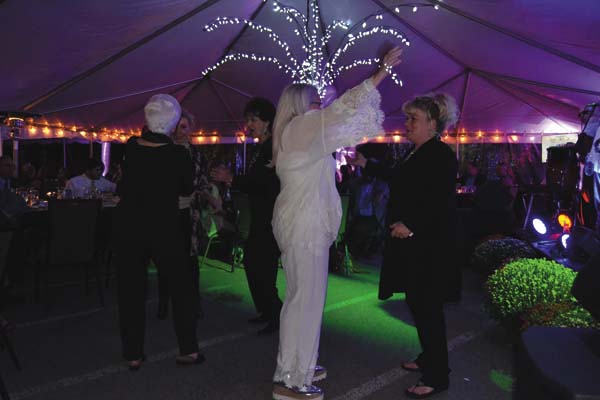 Attendees of Lexington's Night Out danced to music performed by Flame. 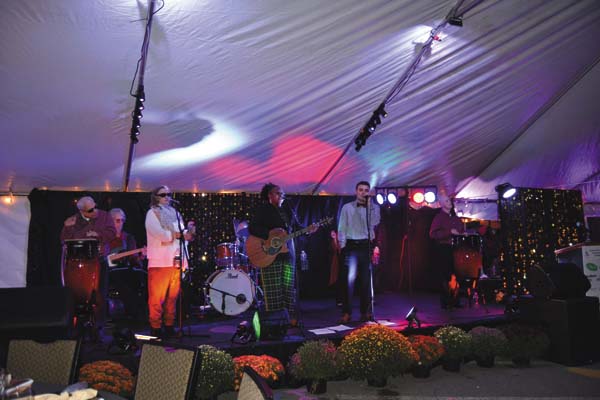 The band Flame performed at Lexington's Night Out gala on Thursday at the Paul Nigra Center for Creative Arts. (The Leader-Herald/Briana O'Hara)