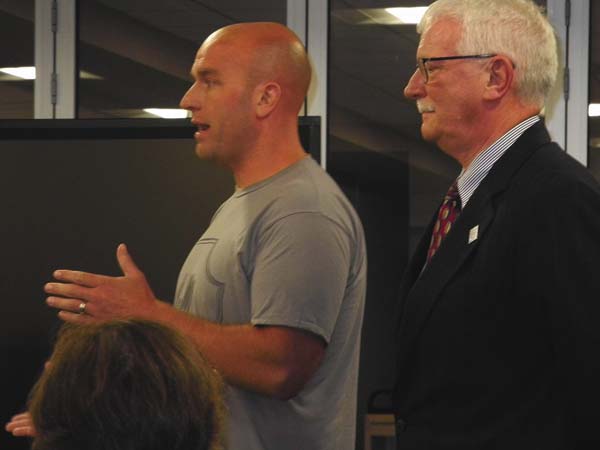 “We’re opening up our [new] building for our 50th anniversary,” Beckett told the school board.

Beckett was referring to Townsend Leather’s anniversary, which will be celebrated with the opening of the company’s newest building at 1 p.m. Sept. 6. “The Stitch” building – the former Diana Knitting Mill on Grove Street bought by Townsend and renovated – will celebrate its opening that day.

Beckett invited school officials to attend the opening. He said the CRG will be doing its own separate tour of “The Stitch.”

He also pointed out that he “loved” what the district is doing to prepare secondary students for skilled jobs and college majors that lead to productive jobs in the Johnstown community.

“All businesses here locally have departments who need these skills,” Beckett said.

The Townsend official said he would be pleased to set up tours with the school district to show students what jobs are available in their own community.

“We have plenty of jobs here in Fulton County,” Peters said.

He said the CRG and local businesses like Townsend can expose students to good jobs available in a great community that is a good place to raise a family.

Beckett said the task for business is to try to attract more “community members” into great places of employment in Fulton County. He said other businesses feel the same way — that they want to attract local workers and keep them for many years.

Board member Patrick Oare asked about the operation of the CRG, and Peters said the agency tries to market and sell the local community.

But Beckett said many businesses in the area want to know if local residents are “engaged” in their communities.

“We’ve seen our whole community evolve in the past decade,” he said.

Board member Beverly Alves said she would like to see Fulton County’s “beauty” emphasized by the CRG in its marketing.