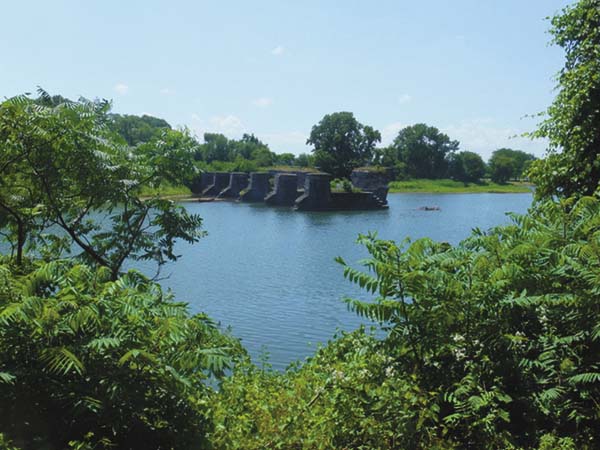 Had the mighty 1841 aqueduct existed when the Hudson packet boat crossed the Schoharie Creek, it would never have fallen into the water and drenched its passengers. (Photo courtesy of Peter Betz)

These little ‘odd bits’ continue appearing. For example, the May 29, 1829 Troy Sentinel reported an unpleasant incident on the Erie Canal at Fort Hunter’s Schoharie Creek crossing, when the packet boat Hudson performed an anti-personnel maneuver that might have been preventable after the 1841 stone aqueduct was erected. Thanks for awareness of this interesting gem goes to Dave Brooks of our nearby Schoharie Crossing State Historic Site.

“The Packet boat Hudson went over the dam at the Schoharie Creek the night of the eleventh. The boat arrived at the creek, whose rapid waters were very high, at 9 o’clock with twenty-five passengers, nearly half women and children: the boat came rapidly into the creek; when the captain neglected to avail himself of the ferry rope, her stern struck upon the dam — she then swung around sideways and was precipitated over the dam, a fall of six or seven feet! The alarm can better be imagined than described. Passengers lost their trunks and all their clothing. The boat drifted ten or fifteen rods downstream, lodging upon a shoal, from whence the alarmed inmates, after a night of severe exposure, were taken at seven onto the packet Delaware, where the kind attentions of Captains Dwight and Farnsworth were gratefully received.”

Whether the Hudson’s captain was drunk, asleep, or just incompetent we’ll never know, nor is the fate of the boat’s unfortunate mules mentioned, but in such a calamitous situation, even if an elephant had been on board, he too would have lost his trunk.

In a collection of essays on both Mayfield and Northampton, the compiler, Rev. William Kroeger, relates the cost of an early indigent burial.

“In the earliest annals of official doings in the Town of Mayfield appears the account of an indigent buried at town expense. The bill was passed by the Town Board and recorded in the Town Clerk’s account book. The clerk recorded the expenses as follows:

Early murders are always worth rediscovering, but cause frustration in recounting them accurately, due to the paucity of details regarding who murdered whom and why, and thus such a story can’t fill an entire article.

Such is the case with Moses Lyons, the murderer, and Sarah Yorrington, the murderee, which tragic event occurred in the town of Glen south of Fonda. Lyons was tried at Johnstown.

The Montgomery County Herald, published in Johnstown on Dec. 1, 1829, reported, “Facts disclosed at the trial, which occupied nearly the whole of Thursday, exhibit scenes of human depravity seldom recorded. Intemperance had a share in the work. Lyons was convicted and sentenced to be hung on Friday the eighteenth proximo — his body is to be delivered to a surgeon for dissection.” Thus, murderer Lyons quickly became a skeleton in someone else’s closet.

A retrospective article on early area murders published in the April 28, 1878 Utica Weekly Herald, adds the following: “Lyons was a laborer of intemperate habits who in a fit of drunkenness killed a woman who lived with him.”

The Herald quoted Henry Snyder, an aged gentleman who when young witnessed the Lyons hanging as a member of the military company which escorted the wagon carrying Lyons and his coffin to his place of execution. Snyder related, “The place of execution was the Prindle Farm. A great crowd surrounded the wagon and it being winter, many slipped on the ice. Lyons was moved to laughter by the sight and exclaimed, “What’s the use of rushing? There can be no sport until I get there.”

Johnstown City Historian Noel Levee recently requested information on a June 26, 1855 arsenic poisoning case. I discovered only a small bit of this story, extracted from the Daily Saratogian.

“John Gilcrist on Monday attempted to poison his brother (Peter) and family in Johnstown by putting arsenic in a coffee mill. Nine members of the family were dangerously ill, but by prompt, skillful treatment, are likely to recover. The man is in jail.”

John must have skipped church the Sunday brotherly love was sermonized.

Lastly, I share a humorous fracas my grandfather participated in, as reported in the Dec. 18, 1917 Recorder.

“Rudolph Kuojciekowski, taken to Fonda jail Monday by sheriff’s deputies Adam Betz and Chester Johnson, was brought this afternoon to St. Mary’s Hospital where an x-ray will be taken to ascertain whether or not he has a wooden bullet in his thigh. Rudolph, who has been wanted since April, was located at a Willow Street saloon by Betz and Johnson. Deputy Betz put the cuffs on one man under the impression it was the man they wanted. The actual culprit beat it at once, but a third party tipped the officers their quarry was escaping. Johnson gave chase and fired at the fleeing man with a revolver belonging to Adam Betz. This revolver, Betz told Johnson, was loaded only with bird shot cartridges capped by wooden bullets. After Johnson fired, Rudolph halted. Upon arrival at Fonda, Rudolph was examined by Dr. Bouton who found a wound in the right hip. It may be that the wooden bullet used to cap the bird shot travelled into Rudolph’s body, which would be a very unusual occurrence.”

Although Rudolph wouldn’t have found this funny, he apparently did receive the butt of the joke.