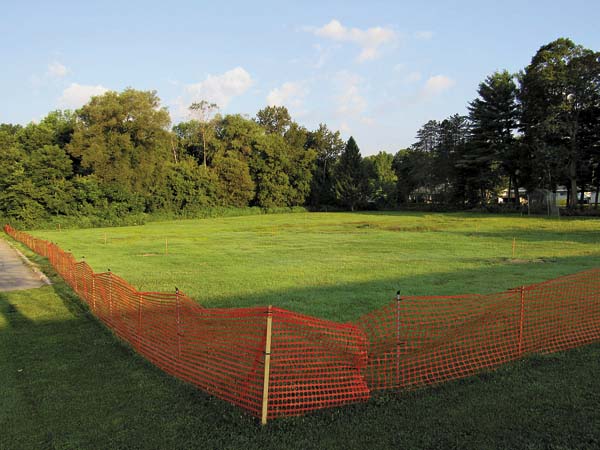 The field adjacent to Kingsborough Elementary School in Gloversville is fenced off to limit access to the site after pit testing of soil and water conducted by Ambient Environmental Inc. uncovered tannery waste contaminating the field. The field is shown on Tuesday. (The Leader-Herald/Ashley Onyon)

GLOVERSVILLE — Environmental testing conducted on the field adjacent to Kingsborough Elementary School in July after the surface recently became uneven with areas of standing water and smelling of sulfur has uncovered soil contaminated with tannery waste.

Gloversville Enlarged School District Superintendent David Halloran announced the findings in a press release on Monday, saying, “The safety of students, staff and community members is our highest priority and this press release is intended to inform the community of the reasons behind, and results of, recent soil and air testing conducted at Kingsborough Elementary School in July.”

According to Halloran, Ambient Environmental Inc. was hired by the school district in late June to conduct soil testing on the playing field to the west of Kingsborough Elementary School after recent physical changes to the field saw the surface become uneven and rutted with standing water in places and with the odor of sulfur present.

On July 9, Ambient excavated 17 test pits on the field, taking soil and water samples and monitoring air quality over the course of the dig. An official from the state Department of Environmental Conservation was also present on-site during the testing.

According to Halloran, tannery waste was located in 10 of the 17 test pits, creating the odor of sulfur, but air quality in the “breathing zone” was not compromised at any time. Following the excavation, each test pit where waste was located was backfilled and then covered with clean soil to limit surface exposure.

Ambient Environmental returned to the site with Alpha Analytical on July 16 at the district’s request to conduct air quality testing inside of the school to determine if any Volatile Organic Compound vapors were present.

The companies reported that detected VOC concentrations were “well below all OSHA Permissible Exposure Limits.”

“This means that air quality, both inside and outside the school building is completely normal and safe,” Halloran said.

Halloran noted that an environmental study of the site conducted in 1991 by Eder Associates Consulting Engineers concluded that tannery waste had been deposited prior to construction of Kingsborough Elementary School in 1972, but found that the field was safe for use as long as the ground was not disturbed.

“Remedial action such as excavating a large volume of soil from the playing field and/or groundwater remediation do not appear warranted except as a risk aversion measure,” the report from Eder stated.

“Based upon findings from this report, as well as information gathered from previous testing, we are very confident that the Kingsborough school building itself and all other areas of the property are safe for students and staff,” Halloran said.

Although the surface of the field has previously been deemed safe, Halloran said as a precautionary measure access to the site has been limited as the district determines how to move forward. The field is currently surrounded by orange safety fencing.

An official from Ambient Environmental will deliver findings of the testing and present options to address the situation to the GESD Board of Education during the next meeting on Aug. 15 at 6 p.m. at Gloversville Middle School in the board meeting room located on the lower level of the school in the area of the district offices.

“The Board of Education and I are committed to addressing this issue properly and safely and wish to do so in a manner that will allow unfettered use of the field for generations to come,” Halloran said.

The report from Ambient Environmental will also be released on the GESD website in the near future. Additionally, Halloran said the district is working closely on the issue with Mayor Vincent DeSantis, Assemblyman Robert Smullen, the state Department of Education and the DEC.

“We appreciate and share the valid concerns many have regarding this issue and vow to remain steadfast in our efforts to properly ameliorate for current and future generations,” Halloran said.