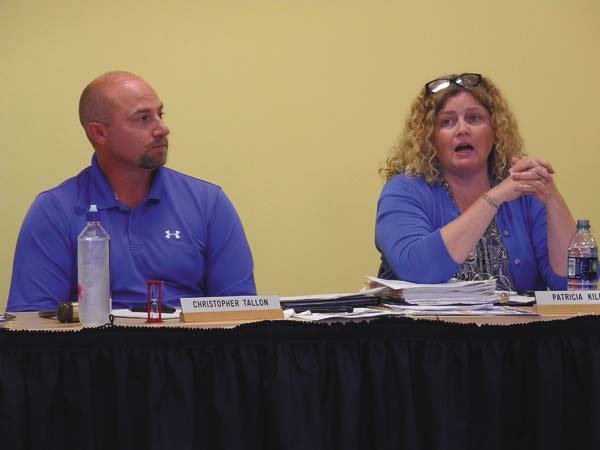 Greater Johnstown School District Superintendent Patricia Kilburn, right, makes a point during the Board of Education meeting Thursday night at Johnstown High School. At left is board President Christopher Tallon. The board accepted the resignation of Kilburn, who is taking a superintendent position in September with the Oneida Herkimer Madison BOCES District. (The Leader-Herald/Michael Anich)

JOHNSTOWN — The Greater Johnstown School District Board of Education Thursday night accepted the resignation of Superintendent Patricia Kilburn, and discussed the pending search for her replacement.

Board President Christopher Tallon joked about accepting the resignation when it came up during the board’s agenda at Johnstown High School.

“This is pretty simple, because we’re not going to let it happen,” Tallon stated.

Kilburn, a Caroga Lake resident who has served as Johnstown superintendent since 2017, was named July 29 by the Oneida-Herkimer-Madison BOCES District as its new superintendent and CEO, effective Sept. 30. She will be earning $164,000 annually overseeing a BOCES for 12 component school districts in that region.

Her resignation from the Johnstown district is effective Sept. 29.

Kilburn said “thank you” after her resignation was officially accepted, and wiped away tears as Tallon commented about how the district would miss her.

“She is probably one of the hardest working administrators I’ve ever met,” Tallon said. “She was a great advocate on behalf of this district.”

The board president noted that Kilburn guided the city school system through tough financial times that are not over yet.

“The ship isn’t turned around yet, but it’s in the right direction,” he said.

But Tallon also referred to her new role with the OHM BOCES as a “great accomplishment.”

Later in the board meeting, Tallon broached the subject of hiring a new Johnstown superintendent. At his suggestion, the board ultimately decided to work through the area BOCES to help secure a long-term interim superintendent, “maybe” as long as for a couple of years. If that person can’t be hired, the board decided a shorter-term interim may do.

“She just wants some direction where she can go with the search,” Tallon said. “She wants us to have greater input.”

Board member Patrick Oare said the board can secure a person to start the new 2019-20 school year, but then look for a more stable long-term interim superintendent.

“She thinks it’s possible to get someone in here for the beginning of school,” Tallon said of Murphy.

The board discussed possibly finding an interim who can help with the district’s ongoing fiscal difficulties, which have included double-digit tax levy increases and raising money through donations to pay for athletics.

“I think we should be careful not to put all our eggs in the financial basket,” said board member Noelle Smrtic.

Kilburn urged the board to rely on the competence of existing staff after she leaves to guide the district academically. She also told the board not to “forget” about education financial consultant Rick Timbs, who the district has relied upon for advice periodically.

Tallon said he thinks the qualities of Kilburn’s replacement — whoever it is — should include “no previous ties to the district.” He said he wants a “clean slate” with the top administrator, who must also be a “people person.”

The board decided to give Murphy three dates — Sept. 19, 26 or 27 — to meet with her regarding commencement of the search.