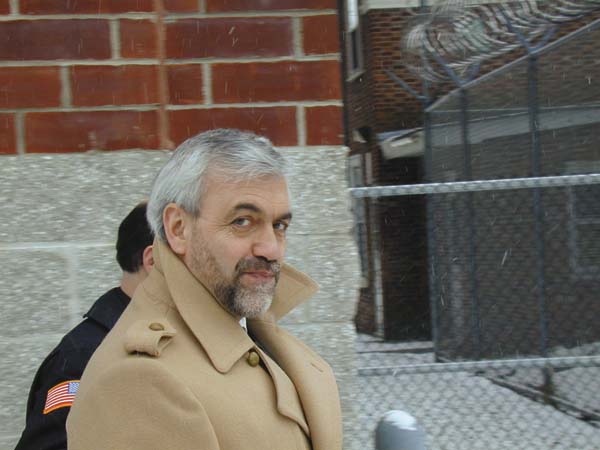 Jeff Glanda glances at the camera as he walks into court during his murder trial in Elizabethtown in January 2000. (Adirondack Daily Enterprise/Victoria Hristovski)

Jeffrey Glanda, who was serving life in prison for the 1997 murder of his estranged wife, died Wednesday at Green Haven Correctional Facility in Stormville.

Glanda, 69, had lived in Tupper Lake and Lake Placid, and was serving a life sentence without parole for first- and second-degree murder – as well as other charges – for killing his wife, Jeannine, in her Lake Placid home. The killing followed a lengthy period of plotting.

The state Department of Corrections and Community Supervision’s director of public information, Thomas Mailey, wrote in a statement that “there is no indication of wrongdoing or foul play” in Glanda’s death at the Dutchess County facility. He said Glanda was “pronounced dead … after receiving emergency medical attention.”

The Dutchess County Medical Examiner’s Office will determine ‘Äéthe official cause of death. Dr. Dennis Chute from that office said the investigation will likely take a couple of weeks. He said all deaths in correctional facilities are investigated.

County law leaves it to coroners and medical examiners to determine if results of their investigations are released, and to whom.

On Aug. 18, 1997, Jeffrey killed Jeannine with the help of a former friend-turned accomplice, Nicholas Pecararo, and tried to make the murder look like a motor vehicle accident. The two men drowned her at her home with water from Upper Cascade Lake and then pushed her vehicle, with her in it, into that lake.

Glanda started his sentence in March 2000, serving time at Attica prison for the murder charges, as well as first- and second-degree burglary, second-degree conspiracy, aggravated assault on a peace officer and first-degree assault. Some of these charges were for slamming his vehicle into a police car that was blocking his way in Ray Brook as he fled from arresting officers.

Glanda had worked as a court stenographer for Essex County. In an Enterprise article 21 years after his sentencing, his son Tyler Glanda and Pecararo described him as manipulative and selfish, valuing others based on their usefulness to him.

On the other hand, Tyler described his mother Jeannine as “selfless.” He recalled how the Elizabethtown pharmacist would go out of her way to help her customers, family and friends.

He recalled one time when Pecararo had come from Tupper Lake to landscape at their Lake Placid home. When he was done, Jeffrey made him walk the 25 miles back home, but Jeannine, feeling bad for her friend, drove him back.

Pecararo, convicted of second-degree murder as an accomplice, has served 18 years of his 20-to-life term. He began to be eligible for parole in September 2017. He was denied it then, as well as at his second parole hearing in May 2019.