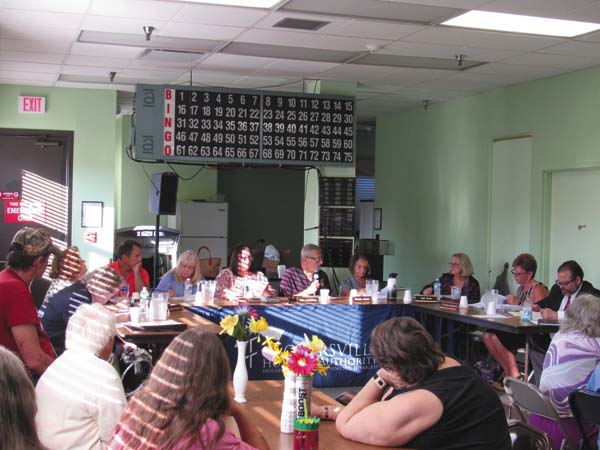 The Gloversville Housing Authority Board of Commissioners on Tuesday approved a $2.44 million operating budget for fiscal year 2020 that projects revenue will outpace spending for the authority by an estimated $31,768. (The Leader-Herald/Ashley Onyon)

GLOVERSVILLE — The Gloversville Housing Authority Board of Commissioners on Tuesday approved a $2.44 million operating budget for fiscal year 2020 that projects revenue will outpace spending for the authority by an estimated $31,768.

The GHA’s $2.44 million operating budget for fiscal year 2020 is balanced by an estimated $1.6 million in operating revenue along with $872,636 in anticipated contributions from the U.S. Department of Housing and Urban Development, resulting in an estimated $31,768 in residual receipts or revenue that will be added the authority’s general fund investments.

The approved 2020 budget contrasts the authority’s $2.34 million operating budget for fiscal year 2019 that after rental income and HUD contributions was expected to carry a $111,474 deficit.

But GHA Executive Director Heather Reynolds anticipates that when the audit of the 2019 budget is performed at the end of this year the results will show that the housing authority was actually profitable for this fiscal year due in part to increased rental income exceeding the anticipated income included in the budget.

“We did the best we could last year, but we had so many catch-ups that it was hard to predict everything,” Reynolds said Thursday.

Reynolds stepped into her position as head of the GHA in February 2018 and was tasked with bringing the authority up-to-date on a past due audit for fiscal year 2017 and other reporting procedures.

With the GHA’s financial records and returns current for this budget cycle, Reynolds said the authority was better equipped to plan spending for the next fiscal year, opting to keep spending essentially on pace with the current fiscal year’s budget to form an enhanced view of the GHA’s position to inform future budgets.

“Not a lot changed, we wanted to keep the budget consistent so we can tell if anything needs to change for next year,” Reynolds said.

The 2020 operating budget features spending increases of approximately $10,593 in administrative expenses, $27,600 in utilities, $8,661 in maintenance costs and $100,234 in general expenses primarily in the form of increased insurance and benefit costs.

These increased expenditures are balanced by a projected growth of $66,236 in rental income and an associated $134,109 increase in HUD contributions.

“We have better occupancy which means we also have a better subsidy,” Reynolds explained.

Reynolds attributed many of the increased costs included in the approved operating budget to growing occupancy rates, noting that rising electricity use accounts for the entire $27,600 budgeted increase to utilities.

Although the 2019 fiscal year budget projected rental income totaling $992,358, Reynolds said the GHA has seen climbing occupancy rates this year exceeding projections that she attributed in part to the work of building crews maintaining apartments and quickly preparing the units for new tenants following a vacancy.

“We had better rental income this past year so obviously it will be better next year as long as we keep in line with what we’ve been doing,” Reynolds said.

Additionally, Reynolds said that GHA staff try to be proactive when vacancies occur by maintaining an up-to-date waiting list and interviewing prospective tenants as soon as vacancies occur to bring in new tenants once the maintenance staff is ready to turn over the space. The authority has also been trying to beef up activities and provide more events to keep residents engaged.

Overall Reynolds said she is pleased with the GHA’s $2.44 million operating budget for fiscal year 2020, hopeful that the year will go even better than projected.

“I think it’s obviously a good thing, I’m just glad GHA is moving in the right direction,” Reynolds said. “The idea is that we provide sanitary, affordable housing for people that hopefully they want to live in. By being more financially stable we’ll be able to do more for tenants and that’s what it’s all about, taking care of our tenants.”