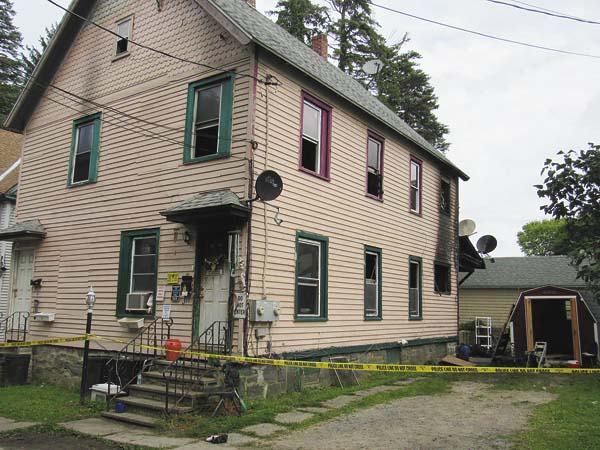 A two-family home at 4 Prospect Place in Gloversville was damaged by fire early Monday around 1:21 a.m. The residence is shown Monday afternoon. (The Leader-Herald/Ashley Onyon)

GLOVERSVILLE — An early morning fire at a two-family residence on Prospect Place displaced four residents Monday and the cause is currently under investigation.

Members of the Gloversville and Johnstown Fire Departments were dispatched to a structure fire at 4 Prospect Place on Monday around 1:21 a.m., encountering heavy fire with two additional exposures in the rear of the building upon arrival, according to a press release.

Fire crews were able to contain the fire to the rear of the first floor apartment and an exterior porch and staircase, preventing the blaze from reaching a storage shed on the property and a neighboring garage that were threatened by the progressing fire.

The four residents of the two-family home and a dog were able to escape the building unharmed before fire crews arrived. Two adult cats from the residence also survived the fire. Another adult cat and four kittens are believed to have perished. No firefighters were injured fighting the blaze.

The fire was extinguished and the building overhauled and cleaned up by firefighters by approximately 4:14 a.m.

“They did a great job of containing the fire to where it was when they got there and keeping it at bay, also keeping it from extending to a garage and storage shed and keeping damage to a minimum,” Fire Chief Thomas Groff said Monday.

Fire damage at 4 Prospect Place was limited to the rear and kitchen of the first floor apartment and an exterior porch and staircase. Both the first and second floor apartments suffered smoke and heat damage.

Groff said that the two-family home is salvageable, but all four tenants have been temporarily displaced. Currently two of the residents are staying with friends while the other two residents are receiving assistance from the Red Cross.

Anyone with information that may assist investigators in determining the cause of the fire is asked to call the Gloversville Police Department at (518) 773-4506.