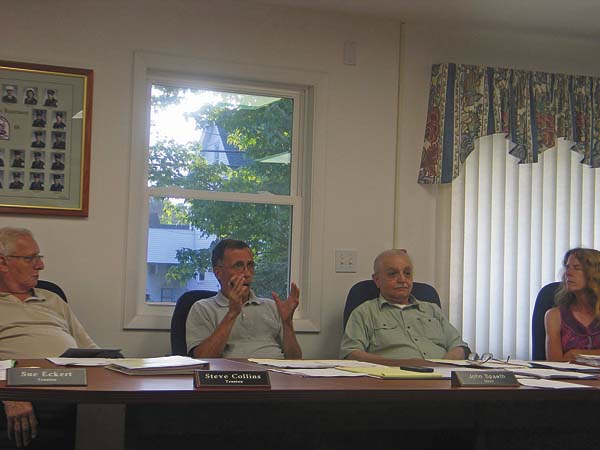 Northville Village Board gave an update on zoning changes during its regular meeting on Tuesday. Shown from the left is Trustee Steve Collins, Mayor John Spaeth, Trustee John Markiewicz and Trustee Sue Sedon. (The Leader-Herald/Briana O'Hara)

NORTHVILLE — The village board has been in the process of reviewing the changes made to the proposed updated zoning and subdivision laws that were made by the zoning committee.

Mayor John Spaeth said the board has been holding workshops to review the changes with the next scheduled workshop to be held on Monday.

He said the zoning committee has done its part and submitted the draft document that includes all the changes made from public input.

Spaeth said they reviewed everything at their workshop that was held last week, but there were a few items the board felt needed more discussion.

A couple of those items include signage and mixed use.

Also during the meeting, Melissa Ellsworth who helps with the family-run business, the Sacandaga Dog Supply in Northville, presented a list of business owners who would also like to address some of their concerns.

“Are they a list of common concerns?” Trustee Steve Collins asked.

Ellsworth said she does not know what their concerns are.

“It’s not addressing anything specific, I’m sure everyone probably has specific things,” Ellsworth said. “I think the concerns are pretty unified.”

In past meetings, business owners expressed concerns about the new signage law, notably the restriction to certain font types.

She said they would like to sit down with the board at some point to discuss the zoning.

Spaeth said the board can reach out to the businesses on the list to see if any of them can attend the workshop on Monday.

“We can have some representation to have them talk about what [their] view is,” Spaeth said.

He said if there are any businesses who are not on the list, they will have to reach out to the board.

“We don’t know what we’re going to hear from the businesses, I don’t know if there is going to be something new or something that we’ve heard before,” Spaeth said.

Once the updates to the zoning are reviewed and accepted, the board will have a public hearing and then will vote on the updated zoning and subdivision law.

The law will not go out to public referendum due to state law.

The vote will take place some time late summer or early fall. If the new zoning doesn’t pass, the village will fall back on the old zoning laws.