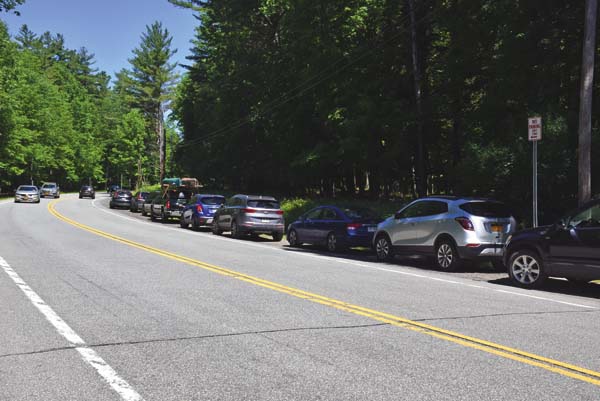 Despite the “no parking” sign at right, many vehicles are parked on the shoulder of state Route 73 next to the Roaring Brook Falls trailhead lot in St. Huberts on July 7. Frontcountry stewards were working at the time at this location to try to educate hikers about rules for things such as roadside parking, but they aren’t always able to control it. (The Adirondack Daily Enterprise/Justin A. Levine)

At the popular Roaring Brook Falls trailhead in St. Huberts, the parking lot was already packed shortly after 7 a.m. Saturday. It was a warm day with good hiking conditions, and word of the state Department of Environmental Conservation’s new roadside parking ban along Route 73 had started to spread. Hikers were starting to arrive earlier to nab parking spaces.

Those who came to St. Huberts later that morning, after the 109 designated spots filled up, would have a decision to make: Choose another place to take in the beauty of the Adirondack wilderness, or park on the roadside and face a $250 fine.

When a Montreal couple arrived that morning, they chose to squeeze into an unmarked space in the Roaring Brook parking lot, figuring it was a safe bet. But they were met with something they hadn’t expected: an angry town supervisor.

Keene town Supervisor Joe Pete Wilson Jr. and Michael Farmer, a vice president of TD Waterhouse bank in Montreal, have different accounts of what happened next. But they both said their dispute was fueled by the tense trailhead parking situation.

For Farmer, an experienced hiker and frequent visitor, the confrontation served as a deterrent. He questioned if, after 10 years of visiting the Adirondacks, he should ever return.

Wilson was already frustrated going into the encounter. He saw the incident as the latest symptom of a larger issue. His town on the front lines of managing the effects of state parking regulations and overcrowding at trailheads, and tension among tourists and locals is high.

Farmer, 64, said he and his girlfriend were attempting to park at the trailhead around 7:15 a.m. Saturday so they could hike Giant Mountain when they were confronted by a man who was around 6 feet, 3 inches tall.

The man, who identified himself as the town supervisor but didn’t give his name, started “barking” at them, he said.

The man they later identified as Wilson allegedly got out of his truck — which Farmer said was also parked illegally in the lot across the street — and told them to leave.

According to Farmer, Wilson said, “you people come down here and take our spots,” and threatened to have their car towed.

When his girlfriend told Wilson to calm down, “he lost it,'” according to Farmer.

Farmer said he positioned himself between his girlfriend and Wilson, and then Wilson told him, “I’m going to knock you on your ass.”

Farmer and his girlfriend left after that and went back to Lake Placid, where they were staying at a motel. Later that day they decided to file a report with police. They tried Lake Placid police, but the trailhead isn’t in the village department’s jurisdiction. So they went to the New York State Police headquarters in Ray Brook and filed a report with them.

Wilson admitted that he lost his temper and swore at the couple on Saturday. But he disputes Farmer’s characterization of the incident and said Farmer’s allegation of a threat was “fabricated.”

Wilson said he arrived across the street from the trailhead shortly after 7 a.m., minutes before Farmer and his girlfriend.

He said he was there to greet the town’s new frontcountry stewards and make sure they had everything they needed. Wilson said the town had paid to train the new stewards, and that he also took that training.

According to Zoe Smith, the deputy director of the Adirondack Watershed Institute at Paul Smith’s College — one of the organizations involved in Keene’s new frontcountry steward program — stewards are trained in talking with the public and how to de-escalate a conflict situation. They also have shirts that clearly identify them as stewards. Wilson said he wasn’t wearing a steward shirt that day.

He said he’d only planned to be there for 10 minutes. He wasn’t wearing anything that might identify himself as a frontcountry steward but said he was there in that capacity.

But there was a scheduling conflict, Wilson said, and the other stewards weren’t there. So he parked his truck on the road leading to the AuSable Club parking lot and put out cones around his vehicle for safety. He got out to talk to other people who were there.

Wilson said at one point he looked across the street and spotted Farmer and his girlfriend attempting to park in an unlined space by the Roaring Brook Falls trailhead.

“I said to the couple from Montreal, in their big BMW, ‘That’s an unlined parking space — you might get a ticket there,'” he said. “One of them started complaining to me.”

Wilson said he identified himself as the town supervisor and clarified that he’s not the one enforcing the parking regulations.

“She started yelling at me and said there’s no sign. I said, ‘I’m just trying to help. You don’t need to attack me,'” he said.

Their conversation quickly went downhill from there, according to Wilson.

Wilson said he tried to walk around him, but Farmer kept cutting him off and stepping in front of him.

“I opened the door and said, ‘How long are you going to stand there?'” Wilson said.

After Wilson left and called state forest rangers for help, Farmer and his girlfriend were gone, he said.

New York State Police said they were notified of the incident Saturday and that the case has since been closed.

“No crime was involved,” State Police Public Information Officer Jennifer Fleishman said in an email. “The incident was documented and the case was closed.

“We are not investigating further.”

Farmer said he’s been coming to the area for the last 10 years, visiting anywhere from six to seven times each summer to hike.

After allegedly being confronted by Wilson, the couple went back to their hotel in Lake Placid and decided to spend their day doing other things. But the confrontation has him rethinking coming to the Adirondacks again.

“I love the vibe, but I just can’t be spoken to this way,” he said. “The level of confrontation was just off the charts.

Farmer said he was thinking about writing a letter to newspapers warning other Canadians not to visit the Lake Placid-Keene area.

He said he’d consider not sending it if Wilson apologized.

Wilson said he’s not going to do that.

“I wouldn’t even consider apologizing to him for his behavior and his partner’s behavior,” he said.

“Someone who’s going this far to cause problems, engage in all this, in fights with a frontcountry steward — people like that? Stay away.”

Wilson characterized the incident as a symptom of a larger issue: Tourists are traveling long distances to visit the Adirondacks, and when they get here and there’s no legal place to park, they get frustrated and sometimes angry.

Wilson said he volunteers as a frontcountry steward every weekend. He’s spoken to hundreds of hikers this summer, and the majority of conversations have been civil.

Wilson has long called for greater collaboration between the state, which imposes new regulations like the parking ban, and local governments like Keene that often end up managing the effects of new state rules.

He said the incident with Farmer shows why having frontcountry stewards, people at the trailheads and helping direct traffic, is crucial.

“The premise of having frontcountry stewards is really valid,” he said. “We need people to help deal with the frustration and the anger.”

The alleged confrontation between Farmer and Wilson comes as state and local officials continue to contend with the after-effects of overcrowding at trailheads in the Giant Mountain and High Peaks wilderness areas.

Designated parking lots often fill up quickly on days with good weather, prompting some hikers to park on the roadside, at times illegally.

As a result, in May the state Department of Environmental Conservation imposed a roadside parking ban on Route 73 between the Rooster Comb trailhead in the hamlet of Keene Valley and the Chapel Pond trailhead to the southeast.

The department also appears to have significantly stepped up roadside parking enforcement.

Union rep Scott van Laer said he understands it’s part of the job, but parking enforcement at the roadside lessens rangers’ ability to accomplish other parts of their jobs, like educating hikers to prevent search-and-rescues.

“You’ve got to give us the staff to do the entire job,” he said.

That’s where a new frontcountry stewards come into play.

The town of Keene, Adirondack Watershed Institute and Paul Smith’s College adventure guides are collaborating on the volunteer program.

The stewards provide information to hikers regarding parking, which may include redirecting them to other trailheads. The stewards also educate hikers about the Leave No Trace program’s principles.

As a result of the parking crunch at local trailheads, at least one collision has happened this summer. On July 1, a car driven by a visiting hiker from New Jersey collided with another car traveling west on Route 73 by the Cascade trailhead in North Elba.

The father of a family of four had attempted to park on the northern shoulder of the road but later spotted an open parking space in the designated parking area. He attempted to make a U-turn into the parking spot and didn’t see the other car coming.

The DEC plans to commission a transit study of Route 73 to look at whether there’s a need for hiker transportation from designated parking areas to trailheads, if current programs in place adequately address those needs, and what sort of transportation may be needed to facilitate safe travel.