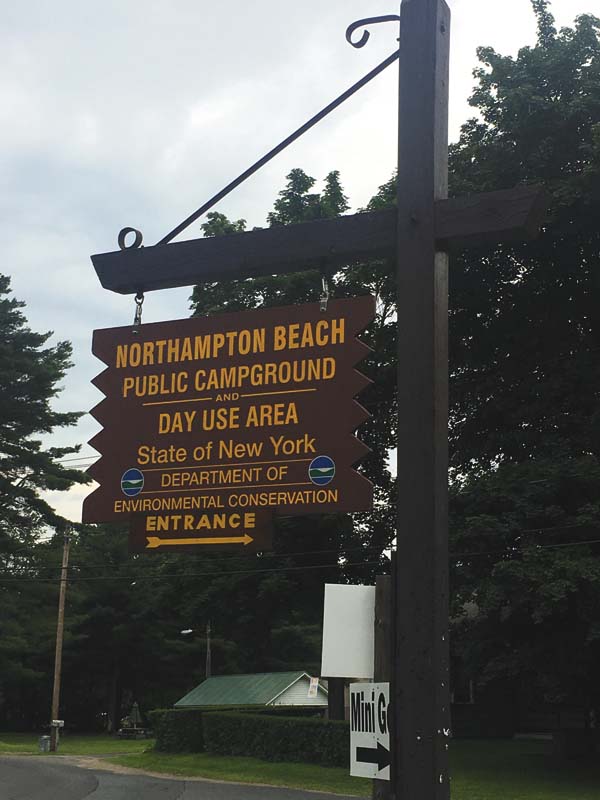 The sign for the Northamption Beach Public campground is seen today. The search for the swimmer that went missing Saturday is continuing today. (The Leader-Herald/Briana O'Hara)

Update: The body of the deceased boater has been found. No other information is available at this time.

NORTHAMPTON — Search efforts will continue today for the boater who was reported missing while swimming in the Great Sacandaga Lake on Saturday.

According to New York State Police, a male boater was reported missing on Saturday at approximately 8:50 p.m. at the Northampton State Campground.

The individual was reported swimming in the Great Sacandaga Lake off of a boat in the area of the Northampton Campground when he began having difficulty swimming and went underwater, according to a state police press release. The missing boater’s identity is not being released at this time.

When asked if the swimmer wearing a life vest, how many people were on the boat with the swimmer, the swimmer’s age and hometown, what caused the swimmer’s difficulty swimming and was the person a good swimmer, Burns said the “case is still under investigation, it maybe a bit before these details are available.”

Search efforts have been ongoing on Saturday and Sunday and will continue today. As of 9:30 a.m., the missing boater still has not been located.

He said the Fulton County Sheriff’s Office also have a boat out with its Baitboat Sonar.

State police is the lead agency of the investigation.

According to the Fulton County Sheriff’s Office Facebook page, they advise boaters to stay away form the area as there will be divers in the water and the area will be restricted.

The Northampton Campsite Boat Launch will be closed while divers are searching for the missing boater.