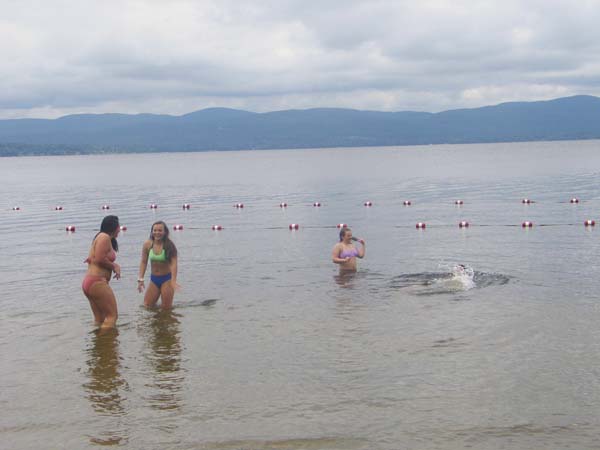 Megan Stewart, left, Maria Stewart, Alexa Stewart and Ken Stewart, who is under water, spend the day cooling off at the Broadalbin Town Beach on Thursday. (The Leader-Herald/Briana O'Hara)

Stay cool and cool off this weekend as temperatures reach the high 80s and low 90s in Fulton and Montgomery counties with dew points in the 70s, causing the air to feel hotter than it really is.

The National Weather Service issued a heat advisory in effect beginning at noon today through noon Saturday then an excessive heat warning until 8 p.m. Saturday, as a heat wave is expected to pass through the area. A heat wave is a period of unusually hot weather that typically lasts two or more days. The temperatures have to be outside the historical averages for a given area.

National Weather Service Meteorologist Ingrid Amberger said high temperatures are expected to start today in the upper 80s and low 90s with temperatures continuing in the low 90s on Saturday.

Amberger said the heat advisory was issued because with the combination of the higher temperatures and high humidity on Saturday, it will make it feel hotter than it actually is. She said with the excessive heat and dew point, the temperature will feel like 105 degrees on Saturday.

“It’s going to be dangerous,” Amberger said. “People with heart or breathing conditions, elderly or young children can be more affected by the temperatures and conditions. Even healthy people can be affected.”

Dangers can include heat exhaustion or heat strokes.

Symptoms of heat exhaustion include, dizziness, clammy skin, sweating, weak pulse and muscle cramps. Amberger said if anyone is experiencing heat exhaustion to find a cool place, drink water, rest and cool down.

“If it gets hotter and body temperature increases, it can lead to heat stroke which can be deadly,” Amberger said.

She said to immediately seek medical attention if someone has a heat stroke or thinks they may be suffering from a heat stroke.

Symptoms of heat stroke include increased body temperatures, headache, vomiting and sometimes people may pass out.

During hot days, Amberger advised people to “limit activity, wear light clothing, drink a lot of water, stay away from alcohol, don’t leave pets out in the heat, give pets plenty of water, check on friends, family and neighbors who might not have a place to cool down and listen to your body.”

Cooling stations will be set up throughout both Fulton and Montgomery counties.

According to Montgomery County Public Health, cooling stations will be in Amsterdam at the Horace J. Inman Senior Center at 53 Guy Park Ave.; at the Glen Town Office Building at 7 Erie St.; in Fort Plain at the VFW Post 3275 at 30 River St.; and at the Fort Plain Senior Center at 204 Canal St.; and in St. Johnsville at the St. Johnsville Community Center and Village Hall at 16 Washington St.

According to a news release, some tips to follow with oppressive heat and humidity are:

∫ Beat the heat with cool showers and baths

∫ Avoid strenuous activity during the hottest part of the day (between 11 a.m. and 4 p.m.)

∫ Stay out of the sun as much as possible

∫ Wear sunscreen and a ventilated hat when in the sun, even if it is cloudy

∫ Never leave children, pets or those with special needs in a parked car, even briefly

∫ Check on your neighbors, family and friends, especially those who are elderly or have special needs