Northville gears up for Doins 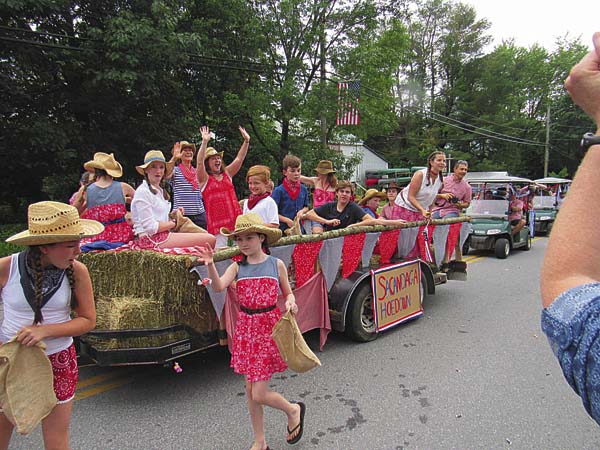 One of the floats in the 2018 Doins parade is shown. (The Leader-Herald/Eric Retzlaff)

NORTHVILLE — The biggest event of the summer, and a major community tradition, the Northville Doins, will begin on Thursday, with parades, music and community events.

“The whole idea of the Doins is to bring people into the community,” said Doins Committee member Wendy Reu. “Families come together and plan vacations around this event.”

The three-day celebration will begin Thursday evening at 6 p.m. with a horseshoe tournament, pony rides, Boy Scouts serving fried dough, the Northville Fire Department will be serving food and Vicks Tavern will have a barbecue, along with other local restaurants open and serving food. At 7 p.m., the Rough N Real Band will be performing.

Vendors will also be set on Thursday ready to sell their items. Reu said so far this year there are 18 vendors, in addition to other activities. The vendors will feature artwork, novelties, home good supplies, face painting, woodworking and more.

“We wanted to start on July 4 to increase the number of days of selling for vendors,” Reu said.

All the carnival rides will be up and operating at approximately 5 p.m. on Friday; weather permitting. Continuing on Friday will be food and craft vendors. Also at 5 p.m. there will be karaoke, and a DJ will be playing music. At dusk in Waterfront Park will be a movie under the stars, and to stick with the ’50s Rock-n- Roll theme, the movie “Grease” will be playing.

A new tradition will start this year on Saturday morning with a house-decorating contest.

Reu said they wanted to try to start the new tradition “to try to develop community spirit.”

She said members of the Doins Committee will drive around the Northville and Sacandaga Park area to judge the decorated houses in the community. Anyone who wishes to participate just simply has to decorate their house.

“You can stick to the ’50s theme; do red, white and blue; or however you’d like to decorate your house,” Reu said.

Fish House Lodge Chapter 298 is providing $200 to be used toward prizes for the contest winners. Prizes will include gift certificates to local restaurants.

Awards for the house decorating contest will be announced and presented around 12:45 p.m., prior to the parade.

The parade is expected to begin at 1 p.m. and will feature 52 entries. A line-up of the parade can be found on the village of Northville Facebook page.

The parade will also follow the theme of 1950s Rock-n-Roll.

This year, the grand marshal for the 4th of July parade will be Larry Serfis, who is a Northville Central School District graduate of the class of 1953.

Reu said Serfis was the outstanding player of the Convention Hall 1952-53 basketball sectionals.

Serfis also served as Northville mayor between 1969 to 1971. He is currently serving his 58th year as a volunteer fireman for the town of Northampton and village of Northville.

Northville Rotary will provide awards for the best floats in the parade.

Following the parade, there will be face painting, vendors, food and rides.

At 6 p.m. to continue the 1950s Rock-n-Roll theme for the Northville Doins this year will be a performance by Matthew Boice and his 10-piece Elvis Tribute Band.

And finally to wrap up the Northville Doins 4th of July Celebration weekend will be fireworks over Little Lake at dusk.

The Northville Doins has been traditionally run by the Civic Association, however, in December the organization sent a letter to the town stating it would not be able to organize the massive event this year.

With the three-day celebration being an important community tradition, the village quickly put together a Doins Committee to organize it.

Reu said it is not an easy task to organize the event and credited the Civic Association for all its hard work organizing it over the many years.

“The village is grateful for all that they have done,” Reu said. “Mayor [John Spaeth] appreciates everything they did.”

“I have a 7-year-old and a 9-year-old, so I’m looking forward to seeing them enjoy it,” Richardson said.