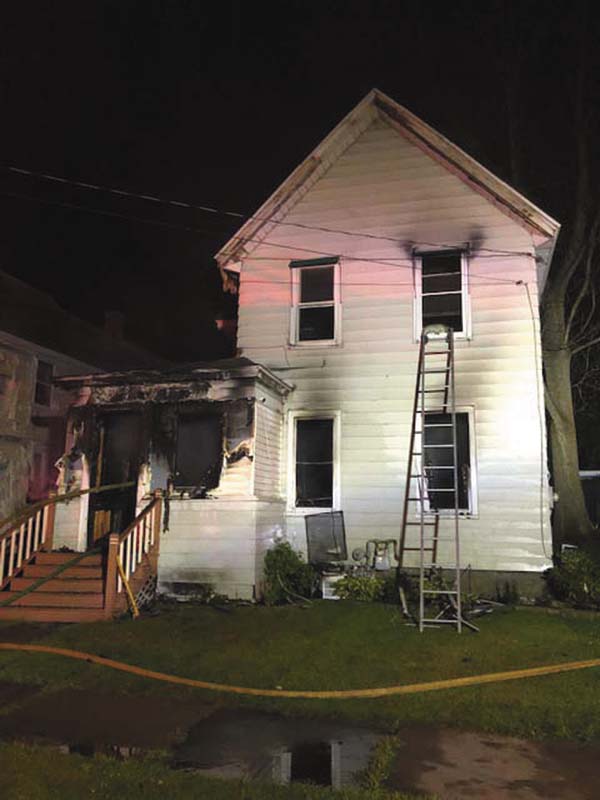 A home located at 21 First St. in Gloversville suffered significant damage following a fire late on Tuesday night. The family of five that occupied the home were able to exit the residence unharmed, but have been displaced. (Photo submitted)

GLOVERSVILLE — A family of five has been displaced following a fire at their First Street home that broke out late on Tuesday night.

Members of the Gloversville and Johnstown Fire Departments were dispatched to a reported porch fire at 23 First St. at 11:37 p.m. on Tuesday. The front porch of the home was fully involved and fire was spreading to the first floor of the residence when fire crews arrived, according to a press release from Fire Chief Thomas Groff.

Responding firefighters worked to suppress the fire and to limit extension in the first floor and onto the second floor of the home through the use of handlines. As fire conditions worsened, Gloversville First Battalion Chief Michael Putnam requested additional manpower from the third and fourth battalions.

The home ultimately suffered significant fire, smoke and water damage on the first floor and significant heat and smoke damage to the second floor. The front porch of the residence was destroyed.

The home was occupied by a family of five who were able to exit the building unharmed and there were no injuries to firefighters or other civilians.

The family will not be able to occupy the building at 23 First St. due to the sustained fire damage and is receiving assistance from the American Red Cross.

The cause of the fire is currently under investigation by the Gloversville Fire Investigation Team and the state Office of Fire Protection Control Arson Bureau.

The Gloversville and Johnstown Fire Departments were assisted at the scene by the Gloversville Police Department, the Greater Amsterdam Volunteer Ambulance Corp. and the Fulton County Fire Coordinator’s Office.