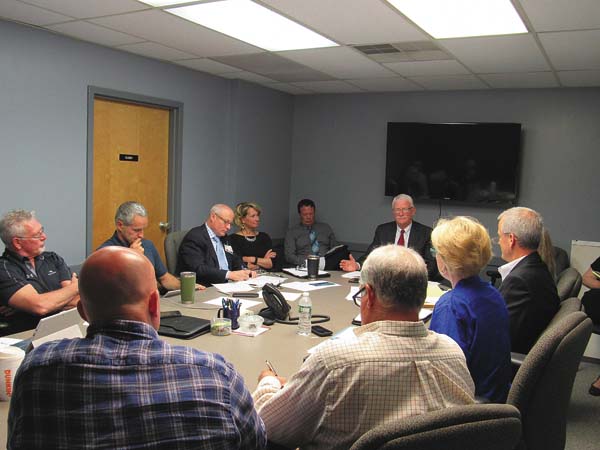 The Fulton County Center for Regional Growth Board of Directors on Friday heard about the agency's plan to explore opportunities for the possible development of a pair of programs to support first time homebuyers and farmers in the county. (The Leader-Herald/Ashley Onyon)

GLOVERSVILLE — The Fulton County Center for Regional Growth is exploring opportunities for the possible development of a pair of programs to support first time homebuyers and farmers in the county.

CRG President and CEO Ronald Peters presented early details on the prospective programs during Friday’s CRG Board of Directors meeting.

The first program would be similar to a financial advisory program geared towards preparing individuals who are interested in purchasing their first home to arrange their finances over the course of one to two years before they approach lenders.

According to Peters, under the program a credit check would be conducted on participating individuals to determine their current financial standing compared to where they need to be financially to purchase a home and laying out steps to improve their position.

The participants will then meet with program representatives roughly once a week or once a month to monitor their financial progress as they eventually seek to purchase a home.

“To me the most exciting thing about this potentially is there’s lots of first time homebuyer programs as far as financing, but what I heard you say is the important component of this that others have missed is that it’s a year plus long program that prepares potential first time homebuyers,” CRG Board of Directors Vice Chair Geoffrey Peck commented. “This program walks them through a year to go over their history so they are ready to borrow.”

Peters agreed, noting that he will meet this month with representatives from a similar program in Albany to discuss how to launch the initiative and he met recently with officials from a regional bank to discuss financing options to offer program participants upon successful completion.

While the CRG would seek to establish the program, Peters said the economic development agency would not administer the program, instead planning to partner with Fulton County or a city group to run the program.

Peters added that vacant properties in Fulton County could potentially be marketed through the program through financing packages for first time homebuyers geared towards both purchasing and renovating vacant properties.

The second program that the CRG plans to explore with Fulton County Planning Department Director Scott Henze would seek to establish economic development opportunities for farmers.

“The first step we decided is to sit down with a core group to say hey, let’s talk some ideas out, see what their needs are,” Peters said.

Peters noted that he reached out to state Department of Agriculture and Markets Commissioner Richard Ball several months ago seeking support for the program that has been in the early stages of discussion and development for about six months.

Peters agreed, saying that the program will ultimately seek to tap into new resources and opportunities for farmers in Fulton County, as well as, the potential development of an agricultural park and a partnership with the Cornell University College of Agriculture and Life Sciences to bring cutting edge farming techniques into the county.

“I think we have some potential there,” Peters said.