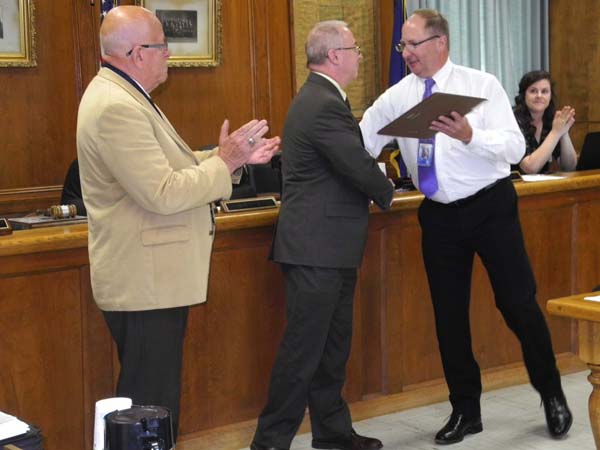 Retiring Fulton-Montgomery Community College President Dustin Swanger, center, is honored with a proclamation by the Fulton County Board of Supervisors at the County Office Building in Johnstown. At left is board Chairman Jack Wilson and at right, presenting the proclamation, is county Administrative Officer Jon Stead. (The Leader-Herald/Michael Anich)

Swanger is retiring for Florida July 31 and Fulton County supervisors gave their farewell in the form of a proclamation read by county Administrative Officer Jon Stead.

During a break in the board’s monthly meeting at the County Office Building, supervisors met individually with Swanger to say good-bye.

“I would like to say thank you to Dusty for his many years of community service,” said board Chairman Jack Wilson.

The proclamation — recognizing his “distinguished service” to the local community college — noted Swanger was installed April 28, 2007 as the eighth president of FMCC.

“Dr. Swanger’s affable personality and record of leadership have made him a notable Fulton-Montgomery Community College president,” the proclamation stated. “President Swanger’s accomplishments have bound higher education and the community closer together by developing programs to support the regional workforce while introducing innovation and creativity to the FMCC mission. Dr. Swanger created a campus atmosphere that attracts students eager to learn, live and lead in a diverse and dynamic global culture.”

Swanger served as chairman for the Fulton County Center for Regional Growth and Fulton Montgomery Regional Chamber of Commerce. He co-chaired the Mohawk Valley Regional Economic Development Council, guided the CEO Roundtable and “immersed himself in many other community service efforts,” the proclamation added.

“President Swanger’s tenure will go down in history as a period of exponential growth and advancement for the college and its community,” Stead read. “President Swanger distinguished himself as the consummate statesman in a craft where such acumen is a superior quality.”

Swanger thanked the Board of Supervisors for its “wonderful relationship” with FMCC.

But the board wasn’t done with FMCC, conducting a public hearing on the college’s proposed 2019-20 operating budget. The budget’s fiscal year begins Sept. 1. The budget was approved May 16 by the FMCC Board of Trustees. The spending plan shows a 5.2 percent decrease from the current year’s $19.8 million budget. The budget is composed of $4.9 million in state aid, $6.6 million in tuition, $303,878 in applied fund balance and $1.8 million in grant funds.

The budget maintains sponsor shares from Fulton and Montgomery counties at the current year’s level of $1.545 million per county.

An overall decrease in tuition revenue of $675,000 from the current year is in the budget. But the cost to attend FMCC for individual students who reside in the state will increase next academic year. The hike is $300 per semester to a total of $2,450 per semester or $4,900 per year.

Swanger said the $300 tuition hike is “more than I would like.” He said FMCC is “in the middle of the pack” of New York’s community colleges with its $4,900 per year tuition.

“We’ve done a lot on campus to control costs,” the outgoing president said.

But Swanger’s last official words to county legislators were to remind them that FMCC is down about 42 full-time employees.

The board adopted the FMCC budget: 14 yes, with five absent, and one abstention by Gloversville 5th Ward Supervisor Gregory Young, who is employed by the college.