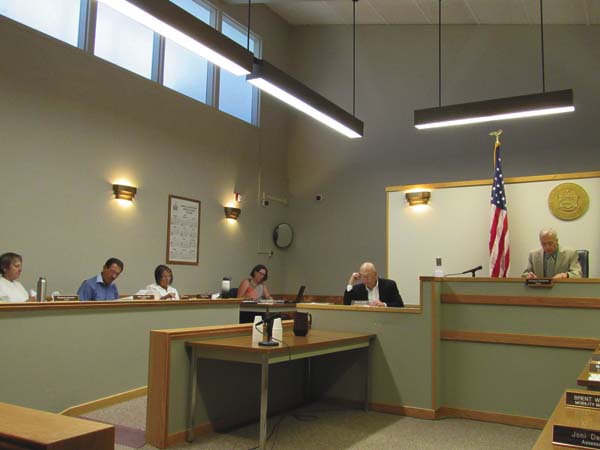 The Gloversville Common Council on Tuesday authorized the submission of a $225,000 Brownfield Opportunity Area Nomination Study grant application to prepare a strategy to redevelop areas of the city impacted by brownfields that could open future grant funding opportunities for redevelopment. (The Leader-Herald/Ashley Onyon)

GLOVERSVILLE — The Common Council on Tuesday authorized the submission of a state funding application aimed at preparing a strategy to redevelop areas of the city impacted by brownfields that could open future grant funding opportunities for redevelopment.

The city has been laying the groundwork to prepare a Brownfield Opportunity Area Nomination Study grant application for several months, including last month when LaBella Associates was contracted to prepare a Consolidated Funding Application submission.

Grant funds can be used to develop long-term plans for areas surrounding identified brownfield sites, including the preparation of site assessments, revitalization plans and implementation strategies. Approval of completed plans by the state can open additional grant funding opportunities and generates a 6 percent income tax credit applied to projects in the BOA.

The city took the final step towards seeking funds for the plans on Tuesday when the Common Council authorized the submission of the BOA Nomination Study grant that provides funding for 90 percent of the project cost and requires a 10 percent match from municipalities.

The approved resolution includes details on the scope of the proposed study that the city estimates will cost $250,000 total. The city is requesting $225,000 from the state for the study, planning to cover the required 10 percent match, equal to $25,000, with in kind services from the city and partner planning and economic development agencies.

The city previously identified two potential BOAs covering broad swaths of the city that total approximately 197.7 acres and include 81 potential brownfield and underutilized sites, according to the council resolution.

“Any property that there was some industrial use to in the past can qualify as a brownfield, it doesn’t have to be one of these heavily polluted sites that cost millions of dollars to remediate,” DeSantis said.

DeSantis pointed to two former gas station sites at the corner of Kingsboro and Eighth avenues and the corner of Spring and Bleecker streets as examples of potential brownfield sites that can be included in the study, saying that these sites may not be polluted, especially if the gas tanks were previously removed.

“So when you look at the city as a whole it wouldn’t be hard to come up with 80 properties,” DeSantis said.

If the city is awarded the grant, the funds will be used to complete a study to determine the boundaries of the BOA for final submission to the state seeking official designation for the BOA which would open new grant funding opportunities while improving the city’s chances to secure such funds for site remediation and projects within the designated area.

DeSantis highlighted the grant application as a potential funding source opening paths to redevelopment projects in concert with the city’s $300,000 Brownfields Assessment grant from the U.S. Environmental Protection Agency awarded in June and $78,000 Local Waterfront Revitalization Plan grant from the state Department of State awarded in December through Round VIII of the Regional Economic Development Council initiative.

“This actually goes along with our EPA grant and our LWRP,” DeSantis said. “It’s a substantial funding for moving that forward.”

The federal Brownfields Assessment grant award will be used to inventory and identify sites in the city for assessment, to assess sites for hazardous substances, to complete cleanup and reuse plans and to conduct community outreach activities.

The LWRP award will be used to develop a land and water use plan that identifies long term uses and implementation strategies. LWRPs are subject to state approval that once secured will allow the city to apply for up to 50 percent grant funding for projects related to waterfront redevelopment. Projects in roughly half of the city’s residential neighborhoods surrounding the Cayadutta Creek could be eligible for grant funding under the program.