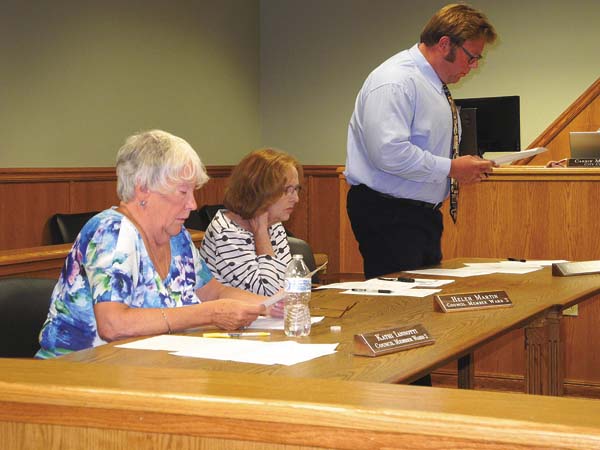 JOHNSTOWN — The Common Council on Monday night rejected two city paving bids and will start all over again rebidding.

Sealed written bids for the resurfacing of certain city streets were opened last Thursday, but officials said there was an error in the quantities.

“We try to break it up by street,” City Engineer Christopher Vose told the council.

But Vose admitted he made a personal error in some figures that resulted in an erroneous bid package.

“No one could come to a peaceful resolution,” he said.

He said the matter was decided Monday afternoon to reject bids and start over.

“We were going to have to make some changes to the quantities, anyway,” he said.

The council was poised in the first round to accept a $289,530 paving bid from Empire Paving of Duanesburg Monday night at City Hall. The bid was for the resurfacing of city streets in 2019, according to Vose.

But the council voted Monday night to authorize the city clerk to advertise once in The Leader-Herald, the official newspaper for the city of Johnstown, the Daily Gazette, and the New York State Contract Reporter to redo bids. Specifications and bid forms are available at City Hall July 23. Bids will be publicly opened at 11 a.m. Aug. 15 at City Hall.

Vose said the city will hopefully be “paved out” by October, although he hasn’t divulged the list of streets to be resurfaced.

Officials initially said the total funds available for city paving is $363,506 for fiscal year 2019-20. The state Department of Transportation has notified the city that $279,861 is available through Consolidated Local Street and Highway Improvement Program, or CHIPs, funding. The city also has the following funds available for paving: $19,764.17 rollover from the 2018-19 CHIPS capital funding; and $63,881.09 from PAVE NY.

In other business Monday:

∫ The council passed a resolution establishing a standard work day for 45 city government employee titles — retroactive to Jan. 1 — to correctly report information to the state Retirement System. Most are seven to eight-hour shifts. The state Comptroller’s Office requires that the governing board of the city of Johnstown establish a standard work day for all positions covered under the city’s employment.

The council has decided to undertake reconstruction of the bridge.

The council declared itself lead agency under SEQR, determining the proposed project is an action under state Environmental Conservation Law. Officials said due consideration has been given to the impact that the project may have on the environment. On the basis of such consideration, the council found no substantial adverse environmental impact will be caused, executing a negative declaration to be filed in the office of the City Clerk.

∫ The council approved a resolution allowing it to advertise for requests for proposals until Aug. 9 for an independent, certified public accountant to audit a city document. Needed is an audit of the city’s annual Financial Report Update Document.

The city is advertising for requests for proposals, from qualified firms, to provide audit services. Specifications are available today in the City Clerk’s office in City Hall. The deadline for a written response is 4 p.m. Aug. 9 in that office.