Akins sentenced to 20 years to life 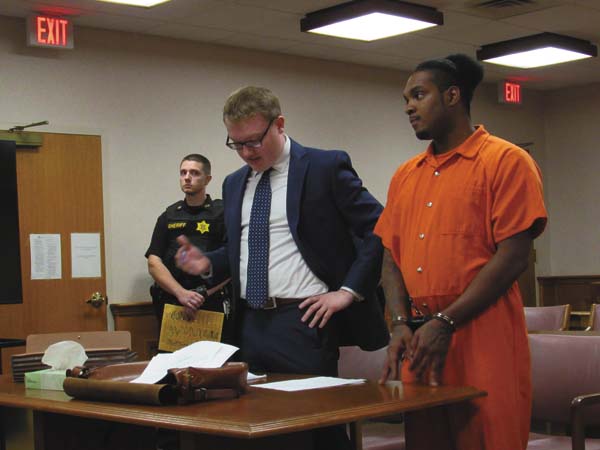 Delaney Akins was sentenced to 20 years to life imprisonment in Fulton County Court on Tuesday for kidnapping and assaulting a Gloversville man last August. Beside Akins stands his attorney Kyle Davis. (The Leader-Herald/Ashley Onyon)

JOHNSTOWN — Delaney Akins was sentenced to 20 years to life imprisonment in Fulton County Court on Tuesday for kidnapping and assaulting a Gloversville man last August.

The sentence also carries five years of post release supervision, fees and surcharges totalling $1,425 and Akins will be required to register as a sex offender upon release. Hoye also ordered an eight year stay-away order of protection in favor of the victim against Akins.

The ruling came after Akins was convicted by a Fulton County jury on four counts of the indictment against him for luring his victim into the basement of 15 James St., Gloversville, on Aug. 15 asking for help finding drugs that Akins claimed were missing.

Once in the basement, Akins hit his victim over the head, bound him and tortured him. Akins’ victim was later discovered by a resident of 15 James St. where Akins had been staying and moved to another location in the building. The victim was prevented from leaving the building by Akins for several days despite his suffering from multiple serious injuries.

The victim managed to escape on Aug. 21 and was found by Gloversville police walking toward Nathan Littauer Hospital wearing only boxer shorts, a T-shirt and a towel wrapped around his head. The victim identified Akins as his assailant to police and later in court. Akins was taken into custody on Aug. 21 at the James Street building.

Due to the nature of the crime, The Leader-Herald is withholding the victim’s name.

Fulton County District Attorney Chad Brown on Tuesday recounted details of the crime Akins committed against the victim, while requesting the maximum sentence carried by the kidnapping count of 25 years to life and maximum determinate sentences on each of the assault charges of 25 years.

“He’s a person who would burn someone while they’re tied up, who would throw alcohol on them and light them on fire, he would take a butane blow torch and burn them, he’s the type of person who has no regard for human life,” Brown continued. “He showed no care for what he did to another human being, frankly had [the victim] not been discovered by another person, I firmly believe the defendant would have continued to beat and torture [him] until his body gave up and he died.”

A third charge was leveled against Akins at 19 for which he was convicted of second-degree robbery and sentenced in October 2013 to three years imprisonment with three years post release supervision. This prior conviction meant that Akins’ sentencing Tuesday was as a second felony offender.

“When you consider his involvement in the criminal justice system, you see a distinct pattern of disregard for other people,” Brown said. “He escalated his actions with minimal consequences in family court and that led him on the fast track to prison. Unfortunately prison was the last time he had any real consequences for his actions, so today is the day for Delaney Akins to be held accountable for the heinous acts that he committed against [the victim].”

“While the defendant’s history has given me no hope that he will change, perhaps these sentences will be enough time for him to recognize the problems with his choices and to change his lifestyle,” Brown concluded.

Following Brown’s sentencing request, Akins’ attorney, Kyle Davis, spoke on his client’s behalf asking for lesser determinate sentences, arguing that the kidnapping charge would carry the possibility of life imprisonment regardless of the number of years placed before it.

“I think 15 to life is an appropriate sentence here. Mr. Akins is going to have to meet with parole, get approved by parole before he is released from prison, if they deem that he is rehabilitated after 15 years, I think the decision should be left on them as to when he should be released,” Davis said.

“He does intend to appeal the conviction. I have all of the appropriate paperwork to file after court here today,” Davis added.

Before making a ruling, Hoye offered Akins the opportunity to address the court at which point he claimed his innocence on each count on which he had been convicted.

“I really didn’t do this crime. At the end of the day, whatever you give me, I’m thankful for. You know why? Because I’m not going to be in jail for the rest of my life. I’m not a bad person, all this stuff he’s trying to dig up on me is from when I was 13-years-old. That don’t show that I really kidnapped somebody and all this other extra stuff that I’m here charged with,” Akins said.

Akins went on to argue that there was insufficient evidence to prove his guilt, claiming that the case rested solely on a cigarette butt recovered by state police investigators from the floor of the basement where the victim was held and assaulted, on which Akins’ DNA was positively identified. Akins additionally claimed the jury was biased against him due to his race and the fact that he is from outside of the area.

“At the end of the day, we know what it is in this court, it’s not about me, it’s not about me being guilty,” Akins said. “But I’m not going to sit here and waste y’all time, I just wish everybody have a good day. I know I’m going to be back here in front of you Miss Polly Hoye for my appeal very soon.”

Before rendering a sentence, Hoye offered her own remarks regarding the case against Akins, including his conviction on the first of the assault charges, first-degree assault evincing a depraved indifference to human life.

“With respect to the proof at the trial, there was a number of different types of evidence, it wasn’t just physical evidence with DNA, there were also several witnesses who testified as to Mr. Akins’ actions over the period of days that this incident occurred, including especially the victim of the case, but other people testified as to things Mr. Akins said and did that certainly I think the jury considered and I felt that the evidence did support the jury’s verdict in this case,” Hoye said.

“The jury found that you not only caused serious physical injury and created a grave risk of death to another person, but also that you acted with a depraved indifference to human life, reflecting an evil, wicked or inhuman state of mind,” Hoye continued.

The judge went on to say that Akins would receive a sentence falling between the terms sought by Brown and Davis respectively.

“The sentence that I’m going to give you today is appropriate for the harm that you caused by doing everything that you could over that time to inflict pain and serious injury by trying to prevent the victim from getting away and getting the medical attention that he so desperately needed and for frankly not caring whether he lived or died,” Hoye said.

“I don’t know when you’re going to get out, but I think it’s going to be a long time from now,” Hoye continued. “Because the first count, the most serious charge, has life as a maximum. It’s not up to me, it’s up to parole and you when you’re ultimately going to be released.”