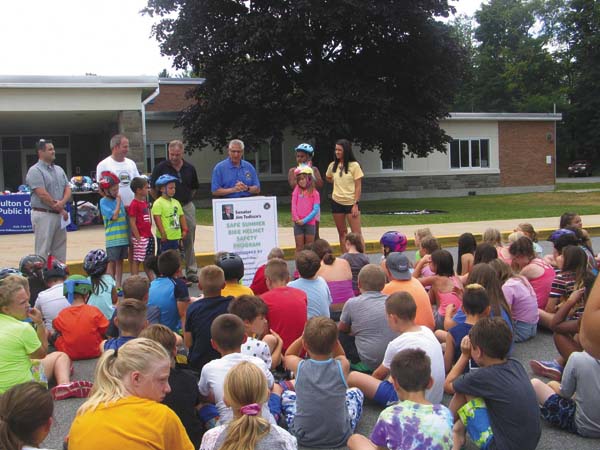 Mayfield Summer Camp kids were informed on bike and helmet safety from Senator Jim Tedisco on Tuesday at the Mayfield Elementary School. (The Leader-Herald/Briana O'Hara)

MAYFIELD –Wear a helmet and get a ticket, seems to be the motto to follow this summer, for any children caught following safe bike riding skills by wearing helmets will be rewarded.

“It’s fun to ride bike, but sometimes we fall,” Tedisco told the camp attendees. “When you fall, it’s best to have a helmet because serious accidents take place when you don’t have a helmet.”

The initiative of the program is to use positive reinforcement to get children in the habit of wearing helmets for safe bike riding and promotes positive interaction between children and law enforcement through the use of “good tickets” and by providing helmets to children who don’t have one.

This year, the safe summer program will distribute 5,000 “good tickets” for free ice cream cones to 23 police departments to reward children who wear helmets while bicycling, skateboarding and rollerblading, and giving away free bike helmets. 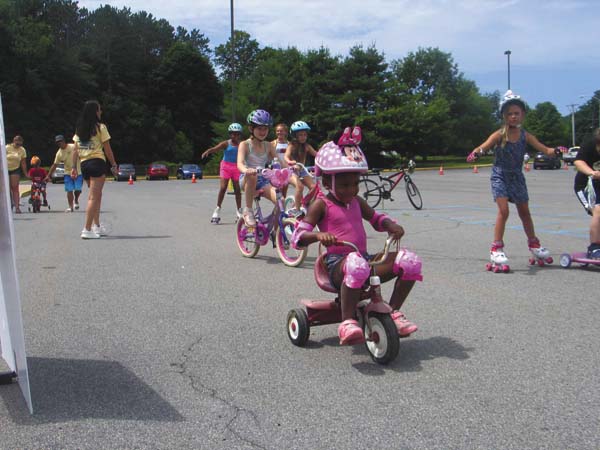 Mayfield Summer Camp kids ride their bikes with helmets to show they are safe when riding bikes during the Safe Summer Bike Helmet Program that kicked-off on Tuesday. (The Leader-Herald/Briana O'Hara)

In the state, the law requires children up to the age of 14 to wear a helmet or parents could face a $50 fine. According to the state Department of Health, there is an average of 54 New Yorkers who are killed each year in bicycle crashes and 19,000 residents who are treated at a hospital due to bike-related injuries. Head injuries are the leading cause of death and permanent disability in bicycle crashes.

The cost of a bike helmet is $20, however, the average charge for a hospital stay due to a bike-related brain injury is $23,000 with an average length of stay of four days.

“Summer is the season for kids to have fun, but we can’t ever forget that they need to keep safety in mind. I want children to enjoy summer, but I also want them to be safe when they’re riding their bicycles. My safe summer program reminds kids to wear their helmets while rewarding good behavior with coupons for free ice cream,” Tedisco said. “This program is a true community partnership among businesses, law enforcement, government and parents, and it’s truly a model for how caring people can come together and promote a fun and safe environment for children.”

Delaney Akins was sentenced to 20 years to life imprisonment in Fulton County Court on Tuesday for kidnapping and assaulting a Gloversville man last August. Beside Akins stands his attorney Kyle Davis. (The Leader-Herald/Ashley Onyon)

Mayfield Summer Camp kids were informed on bike and helmet safety from Senator Jim Tedisco on Tuesday at the Mayfield Elementary School. (The Leader-Herald/Briana O’Hara)

Mayfield Summer Camp kids ride their bikes with helmets to show they are safe when riding bikes during the Safe Summer Bike Helmet Program that kicked-off on Tuesday. (The Leader-Herald/Briana O’Hara)

Students at Gloversville elementary schools collected soda top pull-tabs in May and June for donation to the Ronald McDonald House Charities. On Monday, Gloversville Elementary School PTA member Melissa Dingmon brought the collected pull-tabs to Levi Bovee of Northville who has contributed to the Ronald McDonald House for several years and who will assist the PTA by delivering the collected donations this summer. Ronald McDonald House Charities recycles the aluminum tabs to fund the organizationÕs efforts to provide a home-away-from-home for families during the medical treatment of their seriously ill children. (The Leader-Herald/Ashley Onyon)