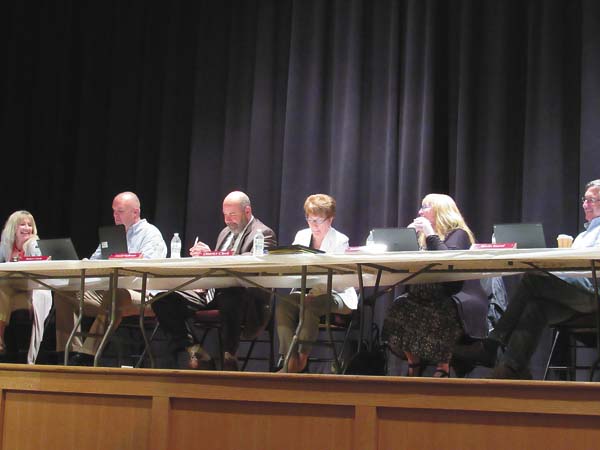 The Gloversville Enlarged School District Board of Education on Monday approved several resolutions aimed at reorganizing the district's administrative structure. (The Leader-Herald/Ashley Onyon)

GLOVERSVILLE — Plans to restructure the administrative team overseeing the Gloversville Enlarged School District are underway following the approval by the Board of Education on Monday for the creation of a new position in the special education department and the movement of a curriculum director into the position of assistant superintendent.

GESD Superintendent David Halloran introduced several proposed changes to the district’s administrative structure during the May 14 Board of Education meeting aimed at improving instruction and student performance through the restructuring of the vacant assistant superintendent position.

Halloran proposed altering the duties of the assistant superintendent position to be filled by one of the district’s two curriculum directors and creating a second assistant director position over the special education department.

The Board of Education on Monday took the first steps towards implementing these changes with the unanimous approval of a resolution creating the new assistant director of student support services position effective July 1 and the unanimous appointment of current Director of Secondary Instruction and Curriculum Director James Wager as the district’s assistant superintendent effective July 1 pending contract negotiations.

While Halloran could not provide specifics regarding the restructured duties of the assistant superintendent due to ongoing discussions among administrators, he said on Monday that the position will focus on providing oversight to curriculum across all grade levels in the district to improve continuity over the current system that separates oversight of the elementary and secondary curriculums.

“Duties will be realigned in a way that we think will create more continuity across the continuum, rather than it being stovepiped between [grades] K through five and six through 12, it will be more oversight K through 12 for the assistant superintendent and then a delineation of duties for the curriculum directors on areas that we think match their strengths and the district needs,” Halloran said.

Additional functions previously assigned to the assistant superintendent over the business office, IT, food services and buildings and grounds will be overseen by Halloran and the individual department heads.

On the selection of Wager to fill the assistant superintendent position, Halloran pointed to Wager as the ideal candidate due to his background first as an elementary administrator and then as the district’s director of secondary curriculum, as well as his depth of knowledge surrounding educational regulations and requirements.

“I think he has the ability to help us streamline our curriculum and improve the communication between the various schools, especially from Boulevard to the middle school, I think that transition is one that we can really improve upon and I think he’s got the right skill set working alongside [Director of Elementary Curriculum and Instruction Lauri Kent,]” Halloran said.

“This has been something I’ve been hoping to achieve this year when I got here and realized that special ed is as large as it is,” Halloran said. “We have over 700 students in special education, the number of meetings that the two administrators conduct almost prevents them from being able to do anything else. It’s almost debilitating.”