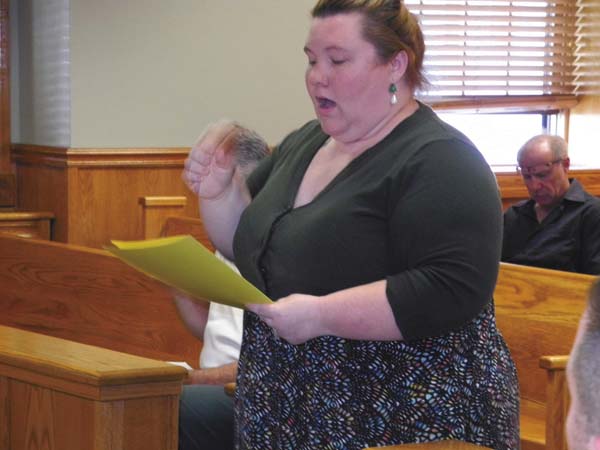 JOHNSTOWN — Downtown issues were brought to the attention of the Common Council Monday night by a business person.

Jessica McClements, owner of McLemon’s, a West Main Street clothing and accessories store, brought her perspective as a businesswoman to the council’s meeting at City Hall.

McClements, a member of the Downtown Johnstown Business & Professional Association, said issues need to be addressed by city officials. She especially broached issues involving parking and public information to make the city more attractive to residents and visitors. She said she came armed with “ideas” to relate.

“It’s really difficult for any of the organizations trying to do great things in the city,” she said.

McClements told the council she met recently with Mayor Vern Jackson and Councilman-at-Large Craig Talarico. She said one of the biggest issues is parking on Main Street.

“A lot of people don’t realize we have three major public parking lots to use,” she said.

She said more signage is needed. She said many people will pass by the downtown businesses because they can’t find a place to park. She said this hampers the ability of tourists to visit and shop in the city. She said the downtown public parking includes the obvious parking off West Main Street bordering the downtown Sir William Johnson Park.

But McClements noted there is another large public parking area between Perry and Market streets, although that is currently in “deplorable” condition and a “mess,” with many holes.

“It’s just not pretty,” the businesswoman said. “I’d really like to see that addressed soon.”

McClements told the council that many people have questions for her about the city that she can’t answer. She said the city needs to step up its ways to get information out to the public.

As an example, McClements said the city’s Facebook page hasn’t been updated since 2014. She urged the city to “get on top of it” — promoting events such as downtown concerts, parades and block parties for the good of the city. With nothing listed on the social media calendar, she stated “it doesn’t really look great.”

In regular business, Jackson announced upcoming events in the city. They include: the annual Farmer’s Market from 3 to 6 p.m. Tuesdays in the West Main Street park, beginning June 25; Vintage Cafe Car Show from 6 to 9 p.m. Thursday downtown; Primary Election — noon to 9 p.m. June 25; and the Star Spangled Fireworks Show at 9:30 p.m. June 29 at Knox Field.

The mayor noted City Hall will be closed July 4, and the council’s next business meeting will be at 6 p.m. July 15 at City Hall.