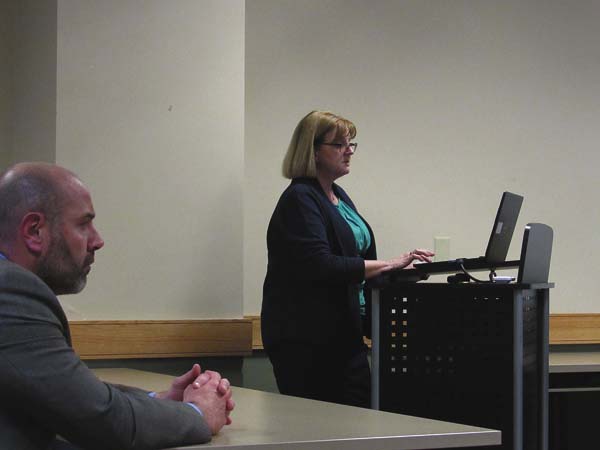 District Treasurer Cathy Meher presented a final overview of the school budget during Tuesday’s public hearing before the regular Board of Education meeting. The $67.04 million school budget approved by the school board during the April 15 meeting represents a 3.95 percent increase over the current year’s $64.49 million budget.

The proposed budget includes a 2 percent increase to the district tax levy, increasing the levy approximately $294,997 over the current year to a total levy of $15.01 million. The tax levy increase is below the district’s state mandated 2 percent tax cap set at 6.21 percent.

The budget maintains existing academic and extracurricular programs for students. The budget also features the addition of a groundskeeper and the purchase of a new truck equipped with a plow for use by the hired employee, the cost of leasing cardio equipment for the high school fitness room to replace broken equipment, the addition of a full-time athletic trainer in accordance with state recommendations and the purchase of three school buses.

The district will also bring IT services in-house led by a new director and computer technician, the salaries for those positions along with the district’s use of a new assessment tool represent an increase of $186,900.

The district will experience a net savings of $12,300 in communication services by hiring a full-time, in-house communication specialist to assume the duties currently carried out part-time by Capital Region BOCES two days a week.

These expenses were balanced in part through $1.3 million in reductions associated with switching carriers for retirees from the Medicare Advantage Plan to Humana and lower than expected premium increases for employee health insurance.

Meher noted that district officials and Humana representatives met recently with retirees to discuss the change in providers. Meher said the majority of the enrolled retirees attended this initial meeting and two additional meetings are scheduled for June 4.

“Quite a few came,” Meher said. “I think it was very well received.”

Following the budget recap the Board of Education opened the floor for members of the public to comment on GESD’s proposed budget, but no one spoke during the public hearing that appeared to have only district staff members in attendance.

The public vote on the $67.04 million 2019-20 school budget will be held on Tuesday when voters will also elect three candidates to three open seats on the Board of Education.

Incumbent candidates Robert Curtis, Kevin Kucel and Vincent Salvione will appear on the ballot seeking the three available three-year terms on the school board.

Polls will be open on Tuesday from 11 a.m. to 8 p.m. in the Gloversville High School gym and Bleecker Town Hall.