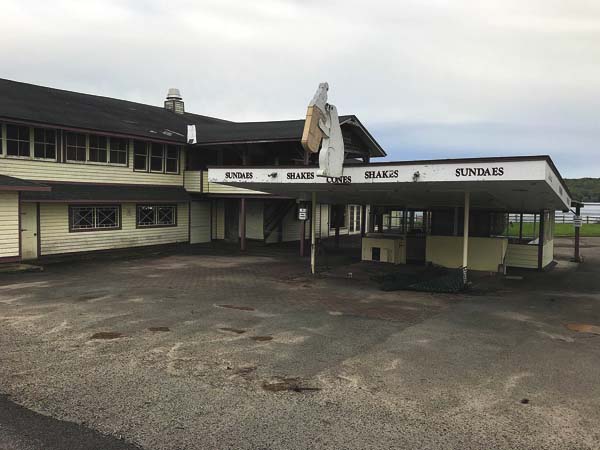 The Sherman's property as seen Wednesday evening. (The Leader-Herald/Josh Bovee)

Editor’s note: This is part one of a two-part series on the Sherman’s property proposal. The second article will run in Friday’s paper.

CAROGA — The town attorney laid out the legal and financial rationale behind the board’s support of a plan to sell the town-owned Sherman’s property to the Caroga Arts Collective ahead of a presentation by the CAC at town hall Wednesday night.

Attorney Gregory Dunn addressed the public in order to inform them of the reasoning behind the town’s intended plan to sell the Sherman’s Amusement Park property to the Caroga Arts Collective for a sum of approximately $50,000, in order to make use of the property while avoiding a likely legal battle from its former owner.

“I’ve researched [declaratory judgments] pretty extensively and the basis for overturning a contract that was reasonably entered into is fraud, duress, a mistake, undue influence and illegality,” Dunn said. “George has agreed to give property to the town as a gift, with the condition that the town is to maintain it and not sell it. It’s a valid agreement, it’s a legal agreement, and the town is supposed to be bound by that promise if it accepts that gift. And so the basis for setting aside this donation agreement just doesn’t seem to be there. And trying to set aside the provision that you can’t sell the property, just based on fairness and contracting and everybody understanding what was going on, I don’t see this agreement being set aside if a declaratory judgment were brought in front of a judge.” 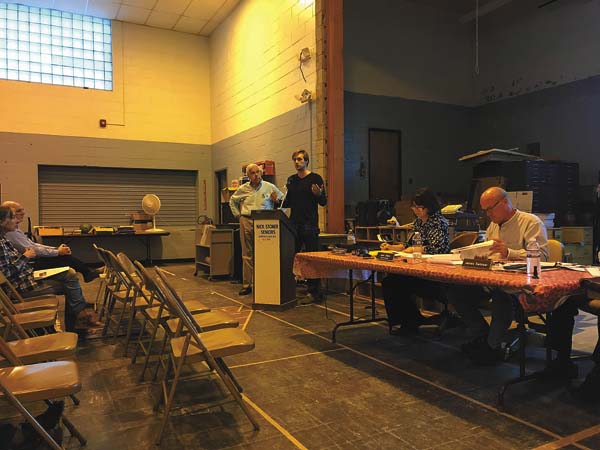 Kyle Barrett Price, executive and artistic director, and Rick Ruby Sr., board chairman, both of the Caroga Arts Collective, address the public Wednesday night to give information and garner support for the CAC's plan to purchase the town-owned Sherman's property. (The Leader-Herald/Josh Bovee)

Dunn went on to explain that if a declaratory judgment were to be reached in favor of the town and the donation agreement was rescinded, then the contract would become null and void and the property would revert to George Abdella.

“If we as a town did that, and we went in front of the judge and he succeeded in rescinding the contract, then the contract becomes null and void and the court puts the parties back in the original positions that they started in, which means that the property goes back to George Abdella, and the town has no right to determine what to do with the property at all,” Dunn said. “So my understanding is that George Abdella would not be interested in paying taxes on the property but would immediately turn it over to the Caroga Arts Collective, and he would be well within his rights to do that.”

The town has obtained a release and waiver from Abdella to sell the property to the CAC for $50,000 — or the approximate caring costs the town has spend on the property since taking over ownership in 2014.

In avoiding the likely legal battles that would ensue if the town were to attempt to sell the property to a party other than the CAC, the town would be forced to accept a lesser sum of money for the property than would otherwise be sought. The town has received a proposal from John Lawrence to purchase the property for $225,000, compared to the CAC’s $50,000 offer. Also, the Caroga Arts Collective is a not-for-profit organization, which makes it tax exempt. However, given the legal footing of the town in regards to the donation agreement, Dunn stressed legal and financial risks of perusing alternative routes.

“It’s not to say that there aren’t other things that couldn’t benefit the town as well. I don’t think the town if trying to convince you of that and neither am I,” Dunn said. “None of us are trying to convince you that this way is the only way and that it’s all pros and not some cons. That’s not true. However, there are lots of legal loopholes, and the results of those loopholes are at best risky and at worst put the property back in George’s hands after the expenditure of a lot of money. So we don’t think for financial and practical reasons that that makes sense.” 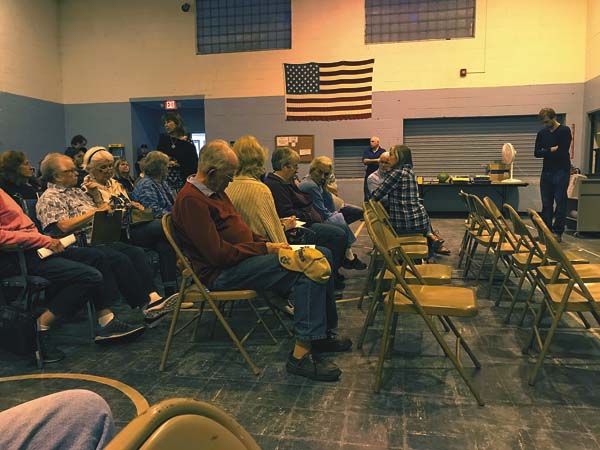 Deborah Barrett Price, assistant artistic director of the Caroga Arts Collective, addresses the crowd Wednesday night during a public comment portion of a town meeting which was called to discuss the legal and financial rationale behind the board's support of the CAC's plan to purchase the town-owned Sherman's property. (The Leader-Herald/Josh Bovee)

The Caroga Arts Collective has agreed to a mandatory referendum so that town residents have the opportunity to voice their say on the matter. It has also agreed, if sold the property, to pay the equivalent of the standard town tax rate to ensure the town does not lose those revenues, and finally the CAC has agreed to offer the town first right of refusal if the CAC were to sell the property within the first three years.

“We believe that we have a known quantity here with the Caroga Arts Collective. We’ve spent a number of months working on putting a contract together,” Dunn said. “George Abdella didn’t think the town should be paid at all because it’s his claim that the town can’t even sell the property. But we’re getting money back from the Caroga Arts Collective, so that’s one step. But the board, understanding that really the decision for this is in your hands, has got the Caroga Arts Collective to agree that this will be submitted as a mandatory referendum. So it’s going to go into your hands and you’re going to get to vote on it, and it’s up to you. We’re not here to make the decision for you, but we’re here to provide you with months and months of negotiations, discussions, so hopefully we can answer legal questions for you.”

Following Dunn’s address and a presentation by members of the Caroga Arts Collective, the public was given an opportunity to question the board’s rationale.

“I think the biggest problem that people are having in this room is the potential that they’re going to lose a lot of money if in fact they bail out after three or four years,” a person in the audience said. “To me, if the price is $50,000, that should be a percentage of what the actual appraised value of that property is. So if that property was appraised at $500,000, they’re getting it for $50,000. So now they’re down to one-tenth of its appraised value. If they go to sell within five years, the town should only have to pay one-tenth of its appraised value. I’d love to have the CAC here. I think it would be wonderful but I think people are concerned that they’re liable to lose a big chunk of cash by going down this road, and I think that bothers a lot of people.”

Rick Ruby Sr., President of the Caroga Arts Collective board, sought to ensure the audience that there would be no direct benefit to selling the property. 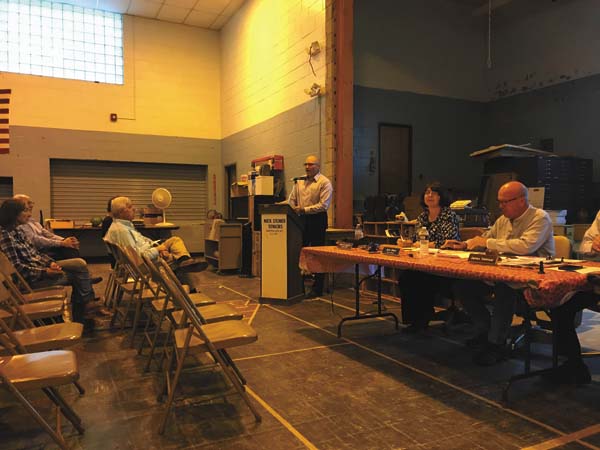 Town of Caroga Attorney Gregory Dunn discusses the legal and financial reasoning behind the board's support of selling the town owned Sherman's property to the Caroga Arts Collective before a crowd of onlookers Wednesday night. (The Leader-Herald/Josh Bovee)

“I assure you this is a not-for profit. There would be no reason to want to sell it for $500,000 or $5,000,000. None of us would personally gain from that. This is a not-for-profit organization. I spend more time working on this project than I do my own business. I do not do it with the idea that I’m going to be able to sell it. I can’t benefit from it. This young man, it’s his dream. From a practical point of view, the CAC has no intention of not trying to do a better job than the town has been able to do.”

Kyle Price went on to add that, “With a non-profit, we have certain obligations in order to keep non-profit status, and that includes a mission and a central focus of the organization. Our mission is distinctly tied to Caroga. Sherman’s is the destination for our mission.”