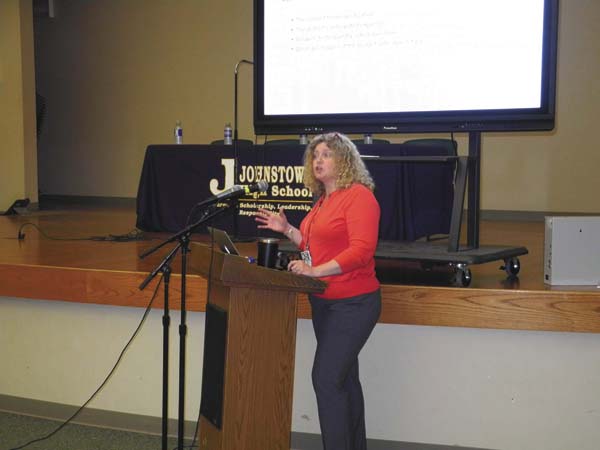 The spending plan — with a proposed 35 percent tax levy increase — comes up for a public vote from 11 a.m. to 8 p.m. next Tuesday at JHS. A supermajority of 60 percent approval is needed to pass the budget. The state’s tax levy cap for Johnstown is 14.6 percent.

The district conducted its annual budget hearing Tuesday night for those in attendance in the Lecture Hall and those watching on Facebook. Similar to the other 14 or 15 public presentations Kilburn has given, the financial news was not good for the district.

“The district doesn’t have enough income to cover our expenses,” Kilburn said.

Administrators and teachers are taking pay cuts for next year, she said. The district has already let eight people go this budget cycle — four layoffs and four through attrition, or people retiring and their positions not refilled.

A two-year plan is proposed by the district which raises the district’s current $8.6 million levy by 35 percent in this budget. That will raise an additional $3 million, but still leaves a roughly $1.7 million gap. Another 15 percent hike in the levy would be entertained for the 2020-21 district budget. State aid is coming in at about $24 million.

During the hearing, the public asked five questions, including one about what happens after the two-year plan.

Kilburn said the district in years following may be able to right the finances and offer more “normal” or “moderate” tax increases, such as the 2 to 4 percent range. But she said to get to that point involves passage of the two-year plan, which doesn’t wipe out fund balance.

“If we deplete these fund balances, we can’t do that [lesser tax hikes],” she said.

Kilburn also mentioned how the district’s Long Range Planning Committee is looking at a possible closing of a school, but nothing has been finalized.

The superintendent took the public through the worst case scenarios if the budget doesn’t pass and if a contingency budget is enacted. She said the large tax levy is needed this budget year to keep high school, kindergarten, athletics, extracurricular and art and music programs for elementary students solvent.

“You are approving a spending threshold,” she said. “It’s a spending limit.”

The superintendent also explained how all school districts must reach certain mandates with instructional levels, and the administration level is where it should be with the Johnstown district. Kilburn said the district’s $39.6 million capital project approved by voters in 2014 is actually under budget at $37 million. But the district is having to take out a $3.6 million loan per year to pay for it, albeit state reimbursement of 90 percent will eventually kick in.

Kilburn said the Johnstown district has actually done very well in audits the last several years, despite some rumors to the contrary.

The district’s teachers are at the bottom 20 percent paywise in the 14-district HFM BOCES region, she said.

“There’s not much more to cut,” Kilburn said.