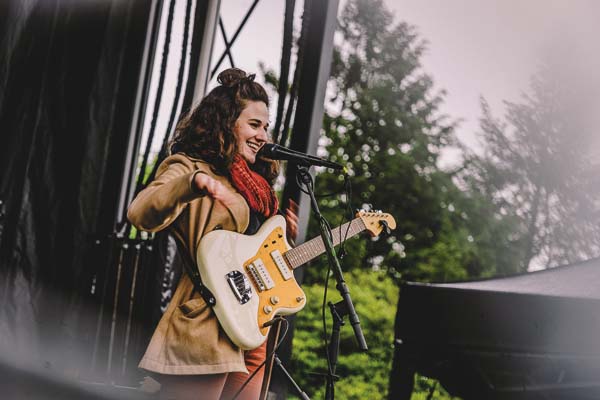 Arielle O’Keefe, performing as Girl Blue at this year’s Tulip Festival in Albany. She will perform at Dorn Apace in Gloversville Thursday. (Source: Girl Blue Facebook)

GLOVERSVILLE — An acclaimed capital region based singer-songwriter, Girl Blue, will perform a “magically melodic” concert at Dorn Space on Thursday at 7 p.m.

Arielle O’Keefe’s interest in music began early playing piano as a young girl before taking up the guitar around the age of 12.

“I was singing and starting to write little songs from the time I was five years old,” O’Keefe said Monday. “It just evolved over time.”

O’Keefe previously lived in New York City where she was pursuing her musical career before settling in Troy.

“I had friends living in this area. I came up to visit them and then eventually moved,” O’Keefe explained.

The decision to relocate has seen O’Keefe explode onto the capital region music scene where she regularly tours performing under the moniker of Girl Blue, a name inspired by the song “Little Girl Blue” as performed by Nina Simone on her debut jazz album of the same name.

“I just felt like it fit,” O’Keefe said of her stage name. “I was really influenced by Nina Simone and the song “Little Girl Blue” had an impact on me.”

O’Keefe seeks to impact others while performing a repertoire of songs featuring personal yet universal stories with songs like “Lolita” about the experience of growing up as a young woman set to her wide ranging musical style encompassing jazz, pop and soul.

“There’s a little bit of everything,” O’Keefe said. “All of the sound is shaping around the story I’m telling.”

With her powerhouse voice, O’Keefe has made an impact locally and was named Solo Performer of the Year at the inaugural Capital Region Thomas Edison Music Awards held at Proctors in Schenectady on April 14.

O’Keefe took home two additional awards for Record of the Year for “Lolita” and Music Video of the Year for “Dreams” during a ceremony created by Proctors to empower and celebrate local artists selected as award recipients by a panel of over 60 judges from the region composed of local club owners, sound technicians, educators, journalists and performers.

“It was really awesome and it was surprising,” O’Keefe said of receiving the awards. “It means a lot and it pushes me to work harder.”

Whether playing with a group as she did this past weekend while performing on the Main Stage during Tulip Festival in Albany or performing solo with her guitar as she will do at Dorn Space on Thursday, O’Keefe said she focuses on being genuine while trying to make a true connection with the audience.

“I hope to connect with people openly,” O’Keefe said.

She added that she is looking forward to returning to the city and Dorn Space where she said owner Brian Dorn and his family have created an inviting space for performers and the community to come together.

Singer-Songwriter Girl Blue will perform at Dorn Space located at 99 N. Main St. on Thursday at 7 p.m. Admission is $10 per person. Cash only. For more information visit the Dorn Space Facebook page.

For more information about Girl Blue or to listen to her music, visit Girl Blue on Facebook and on Spotify.