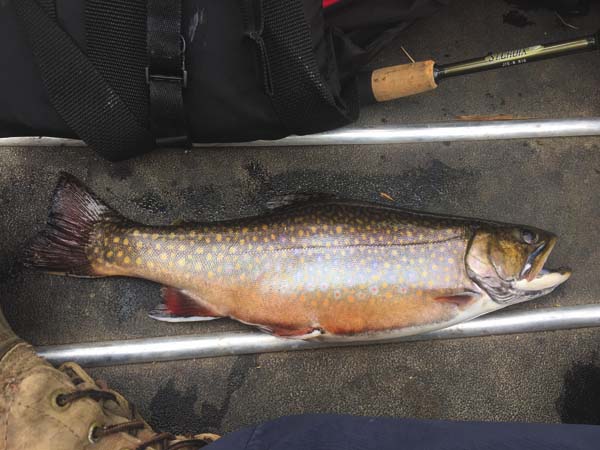 On Jan. 21, the Clearwater Chapter of Trout Unlimited in Albany hosted Trout Power to the monthly meeting where their short film titled “South Inlet Revival: An Adirondack Comeback Story” was shown.

The film showcased Trout Power’s commitment to identifying the location of “heritage” or historically native strains of the brook trout. The brook trout (Salvelinus frontinalis) is New York’s state fish and it holds a special place in the heart of all Adirondack fisherman. Its beauty and perseverance are second to none.

There was a rapid decline of brook trout, and many other species of aquatic fauna, from acid rain in the 70 and 80’s. Toxic airborne discharge from industry in the Ohio Valley and in other parts of the country to the west of the Adirondacks, rained down fossil fuel precipitate which increased the acidity of waters and made them uninhabitable to fish, reptiles, aquatic insects, and amphibians. To combat acidic waters, the DEC would spread lime in many lakes and streams. Remote lakes were limed via helicopter or plane. But this was only a band aid on a large festering wound. With the implementation of the Clean Air and Clean Water Act, water quality has improved in the Adirondacks. Some waters that were once void of life are now teaming with aquatic insects, forage fish, and trout.

Trout Power’s video documentation of the project was packed with interviews of J.P. Ross, the president and Founder of Trout Power as well as exceptional photos and video of the massive effort put forth to research where native fish are found. Trout Power has employed “citizen scientists” such as TU members and local fisherman to research/fish various streams and ponds in the Adirondacks, and to collect DNA samples of the fish caught. The fisherman were trained to take fin clip samples of fish as per laboratory standards so the DNA samples could be analyzed. Some waters are easy to reach and other required volunteers to bushwhack as much as 8+ miles to reach certain remote waters. Fishing was strictly catch and release of course and once a brook trout was caught, a very small patch of fin was clipped and stored in a vial for analysis. Most of the fish caught were only 5′-10” in length, some larger fish reaching 18″-20″ were caught as well. So obviously there are older fish and a good range of age classes within these remote waters.

Through samples collected in waters surrounding Raquette Lake outlet, a new heritage strain of brook trout has been discovered. What does this mean? It means that populations and strains of native brook trout that are unique to the Adirondacks that were once thought to be extirpated, actually exist and are once again self sustaining populations.

Trout Power is continuing their research throughout the Adirondacks in the coming years. Hopefully additional populations of brook trout will be found and new heritage strains of fish will be discovered. Mr. Ross stressed in the film that while finding the fish is the first step, the protection and wise management of the fish is the next priority. No one is saying that fishing if off limits, but maybe certain areas should have lower creel limits and/or be catch and release only. Most fisherman I know practice catch and release of most fish, unless they are fishing for a meal. In most cases, only certain fish are taken home for the table. Certainly, the vulnerability of brook trout is well known. Lakes and streams can be fished out quite easily if restrictions or good management isn’t implemented. In the film, a story from a fisherman “back in the day” was read where a stringer of brook trout was being filled using various methods, and one rather large fish could not be fooled. A simple garden worm was used to catch the fish after several attempts and a hefty “20 pounds of brook trout” were put on the stringer. So, we all can see how the fishery can be over exploited and needs to have a few rules applied for the intelligent conservation of the resource.

If anyone is interested in learning more about Trout Power and/or volunteering in the study, you can visit them at troutpower.com or on facebook. For those who want to learn more about TU, they will be at the ADK Outdoorsman’s Show at the Johnstown Moose Club on Feb. 9 and 10. There is a Gloversville Chapter of TU that meets on the third Thursday of the month at the Broadalbin Hotel at 6 p.m. We usually tie flies, swap books, and embellish of our fish caught. The group fishes all year and is not exclusive to fly fisherman. I will be at the ADK show at The Leader-Herald table on the morning of the 9th and all day on the 10th to talk fishing, hunting, and whatever. In the afternoon of the 9th, I’ll be at the Westerlo Baptist Church Sportsman’s dinner and giving a talk on turkey hunting and strategies to kill big gobblers.

Hope to see you there.