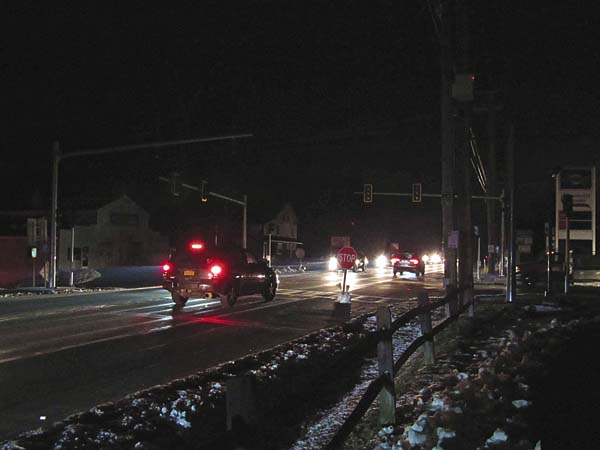 A power outage affected portions of Fulton and Montgomery counties Tuesday night, stretching along Route 30 from Broadalbin into the town of Amsterdam. Temporary stop signs are shown Tuesday at the intersections of Route 30 and County Highway 107 in Perth while traffic signals, streetlights and local businesses at the Four Corners are dark. Power had been fully restored on Wednesday morning. (The Leader-Herald/Ashley Onyon)

VAIL MILLS — While an inconvenience for many, the Tuesday night power outage in the Vail Mills area caused little disruption, with stops signs erected at darkened traffic intersections to help the flow of traffic and National Grid teams working to quickly restore power to customers.

“Last night we were notified by National Grid that there was a large power outage in the Vail Mills area,” said Fulton County Civil Defense Director Steve Santa Maria.

The cause of the power outage was due to problems with the Vail Mills substation.

Santa Maria said that because of the darkened traffic lights, local fire departments went out to intersections and placed physical stop signs.

“There were no accidents or fires reported,” Santa Maria said.

He said when driving during a power outage, he urged drivers to always approach the the intersection with caution and follow driving rules and regulations.

Santa Maria said if anyone is using life-saving equipment or is on any kind of life support that uses electricity, they should notify National Grid as soon as possible so they can know who needs power restored quickly.

“When there is a widespread power outage, this is the type of thing people should be prepared for,” Santa Maria said.

He said when home during a power outage, use flash lights, not candles. He said that if anyone does use candles, to use them safely because they are a potential fire hazard.

When using generators, be sure it is operational and serviced. Also keep generators away from windows, he said, to prevent fumes from entering the home.

“Don’t use generators inside,” Santa Maria said, noting the fumes are dangerous when in a confined space.

Other safety tips when power is out, according to the Fulton County Emergency management, are to keep freezers and refrigerators closed, do not use a gas stove to heat a home, disconnect appliances and electronics to avoid damage from electrical surges, use alternate plans for medicines or power-dependent medical devices, if safe go to an alternate location for heat or cooling and to check on neighbors.

Some preparation tips are to talk to a medical provider about a power outage plan for medical devices and refrigerated medicines, plan for batteries and other alternatives, install carbon monoxide detectors with battery backup, have a phone backup, review supplies that are available in case of no power, use a thermometer in the refrigerators and freezer and be sure mobile phones and other electronic equipment are charged and gas tanks full.